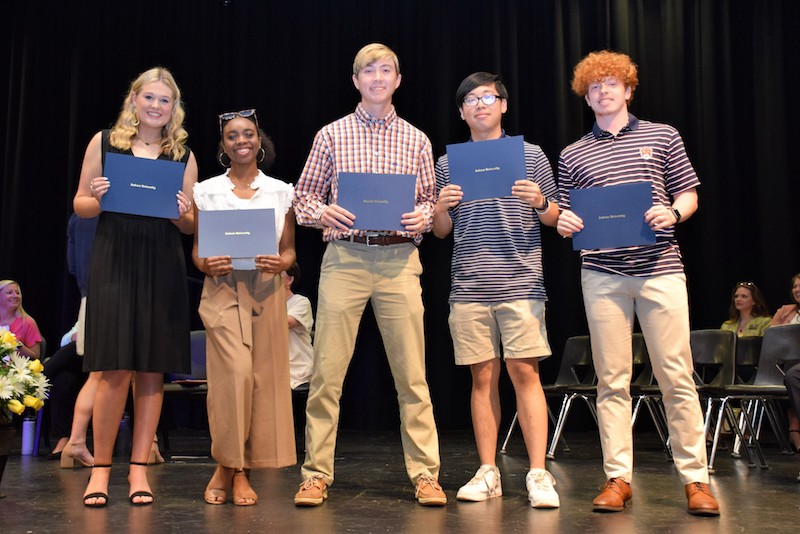 Pelham High School held its annual senior awards ceremony on Thursday, May 12. The ceremony awards various scholarships to students and recognizes their hard work during their high school careers. (Contributed)

PELHAM – On Thursday, May 12, Pelham High School held its annual senior awards ceremony where they are presented with their scholarship awards from various universities and other educational programs.

The seniors are given the awards with their families in attendance, and some students received multiple scholarship offers. There are over 300 in the 2022 senior class, and approximately 153 were given scholarships. According to PHS’s senior counselor Brooke Self, a total of $11.7 million in scholarships were offered.

“I’m so proud,” college counselor Michelle LeSueur said. “You look at all of their hard work and all of our hard work, and it just culminates into this moment. It’s all wrapped up into one, and it’s a very talented group of students who are talented in so many ways.”

“Last year, not everybody was here because some were virtual,” Self said. “I think we only got 90 kids last year who were awarded at the ceremony and the offers only added to like $6 million, so it’s doubled in the amount this year,” Self said.

Self and LeSueur both agreed this year’s ceremony was more fun because they were able to watch the class that endured through two years of the COVID-19 pandemic reap the rewards from their hard work and dedication.

“They’ve been through so much,” LeSueur said. “They are a class that has persevered and endured, and that is a testament to them, to their teachers, to their families that supported them through some rough, nonconventional school years.”

The ceremony honored students who received scholarships for a variety of reasons ranging from academic, athletics and military. Several students were also recognized for their career focused studies which have landed job offers to immediately begin work in certain skilled trades.

Senior Avery Fuller was awarded the 2022 Pelham Way Award, which this year was awarded with a corresponding scholarship.

“To personify the meaning of The Pelham Way, that person must embody an established standard of excellence and be a representative of the collective whole of PHS,” the award description reads. “A character complete with impeccable integrity and a tenacious spirit.  This character is what sets us, Pelham High School, apart from the norm of other high schools.”

Self and LeSueur said watching the students grow and learn confidence through their years at the high school has been rewarding to themselves and to the students. Self said she feels they’ll be able to take their experiences at the school with virtual learning and thinking on their feet to college with them, if that’s where their path lies.

“A lot of these students are getting job offers already with these scholarships, but at the same time, some of them may have checked the box that they’re going to college and then change their minds over the summer,” LeSueur said. “We’ve been through them through all of this and they have our full support with whatever path they end up taking.”