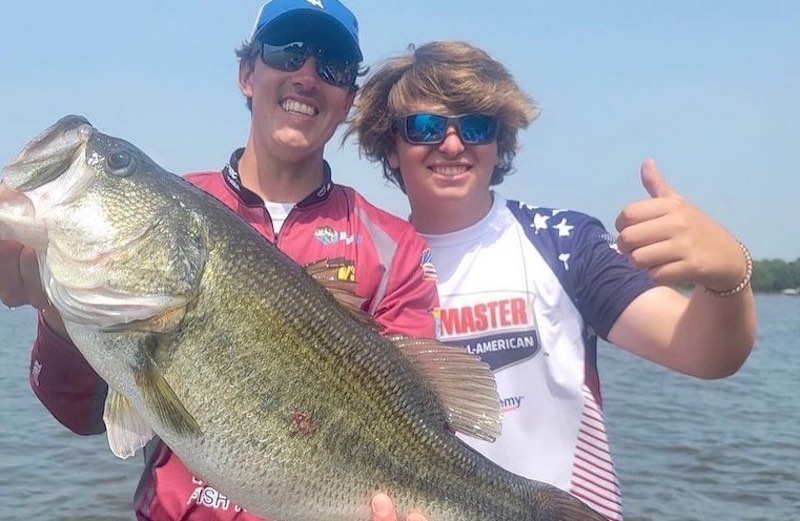 They’ve been taking one another’s money for years.

But on Saturday, May 21, they teamed together to win the Bassmaster High School All-American Exhibition Tournament presented by Academy Sports + Outdoors at Lake Quitman.

They were one of 12 teams, each made up of an Elite pro and a High School All-American, who were allowed to weigh in one bass apiece.

That helped the pair win with a Texas-sized two-fish total of 15 pounds, 14 ounces.

“Fishing one day with an Elite pro gave me a whole new perspective on things,” Hopper said. “There’s a certain mindset you have to have to compete in this sport, and I understand that now. I didn’t think about it this way before, but now I see what it takes. If you’re not fishing to win, you shouldn’t be out there.”

Like most of the All-Americans, Hopper has aspirations of fishing at the professional level, and Hamner said he’s well on his way to being ready.

“We caught a 6-pounder off a brush pile, I caught that 9-pounder and we lost another one that was about 8,” Hamner said. “Then, he caught that 6-pounder on a frog. It was a great day. Braxton and his dad have been hurting people’s feelings in the tournaments I fish back home for a long time. So, I knew he could fish before he ever stepped in the boat.”

The 12 Bassmaster High School All-Americans were chosen during an annual process earlier this year that involves hundreds of applications from all over the country.

The All-Americans also received swag bags with everything from tackle and clothing to Humminbird LakeMaster cards chosen specifically for the region of the country where they live.

“When I first found out that High School All-American was even something that could be done, I told myself no matter what I did, it would go toward getting to this moment right here,” Hopper said. “It’s been everything I dreamed it would be.”