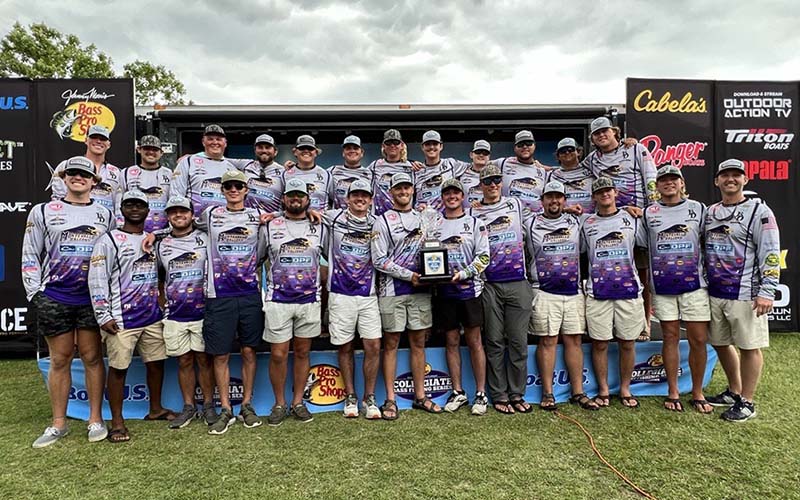 Montevallo became just the third school to win back-to-back School of the Year honors in the history of the sport. (Contributed)

MONTEVALLO – The University of Montevallo fishing team was once again crowned the Bass Pro Shops School of the Year presented by Abu Garcia.

Nearly 200 collegiate bass fishing teams from across the nation competed in the Bass Pro Shops 2022 BoatUS Collegiate Bass Fishing Championship tournament at Pickwick Lake in Florence, Alabama on May 26-27, but only one was named School of the Year for having amassed the most cumulative points of any team in the nation.

Last year, the fishing team, which is part of the UM President’s Outdoor Scholars Program, earned the same achievement. Montevallo became just the third school to win back-to-back School of the Year honors in the history of the sport.

“There are only two other programs that have won this title twice,” said UM Head Fishing Coach William Crawford. “To be able to do that again is a real honor and shows the hard work that our guys have put forth this year.”

“It’s hard to get a repeat title because everybody is gunning for you. We stepped up to the challenge and had another good year. It speaks to the team’s work ethic and commitment to be able to bring another national title home to the University of Montevallo.”

“The skill, industry and passion they invest in their sport is truly impressive,” he said. “William Crawford and Scooter Stano are to be commended for their vision and leadership of our Outdoor Scholars Program at Montevallo. Congratulations to these student champions.”