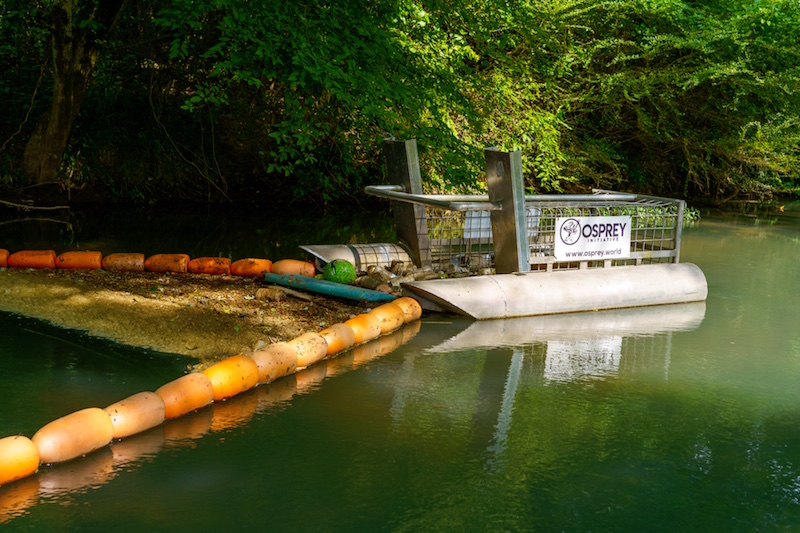 ALABASTER – Since being installed at Buck Creek in March, the Osprey Initiative Litter Gitter has collected almost 21 pounds of litter out of the creek.

“We are pleased with how the Litter Gitter is performing at this location,” said Mitch Lowe, who is a regional field leader with Osprey Initiative. “Most of our litter is collected after heavy rainfall washes litter off the roadways and into the stormwater system upstream. We have had a dryer-than-usual May, but that has enabled the team to clean litter from the banks upstream of the Litter Gitter device.”

Lowe, an Alabaster native, said there are plans to attack the litter downstream this quarter and continue to collect floatable litter with each rainfall in the Litter Gitter.

“One of the keys to combating the litter problem is just staying on top of it,” Lowe said. “Drawing a line in the sand with the Litter Gitter, and then proactively attacking collection points upstream on a regular basis. We look forward to continuing to improve Buck Creek.”

The Litter Gitter consists of a metal cage on pontoons tethered to each side of the creek bank. The device collects floating litter such as plastic bottles and polystyrene foam cups, or lightweight materials such as pool noodles.

The device is made possible through an EPA Trash-Free Waters grant, which was awarded through the Freshwater Land Trust in the spring of 2020.

Osprey Initiative reports the weight and cubic footage of waste and recyclables collected by the Litter Gitter.

Currently, the device is projected to remain at the current location until spring of 2023, when officials will determine the specific location within Buck Creek Park; however, the device is expected to stay inside the park.

Since the installation, city officials have been pleased with the impact the Litter Gitter has had at Buck Creek Park.

The project builds upon Alabaster’s Clean Sweep program, which is a more direct solution for waterway cleanup.

“The Litter Gitter has definitely had an impact on keeping that section of Buck Creek cleaner,” Alabaster Public Information Officer Neal Wagner said. “Since it was installed a few months ago, it has collected nearly 21 pounds of litter that would have otherwise remained in the creek. Of that, nearly 7.5 pounds of debris has been recycled, keeping it out of the county landfill. Buck Creek is an important natural amenity in our city, and our partnership with the Osprey Initiative is helping to ensure it remains clean for everyone to enjoy.”

To learn more about the Litter Gitter, visit Freshwaterlandtrust.org/litter-gitters. For more information about the Osprey Initiative, visit Osprey.world.