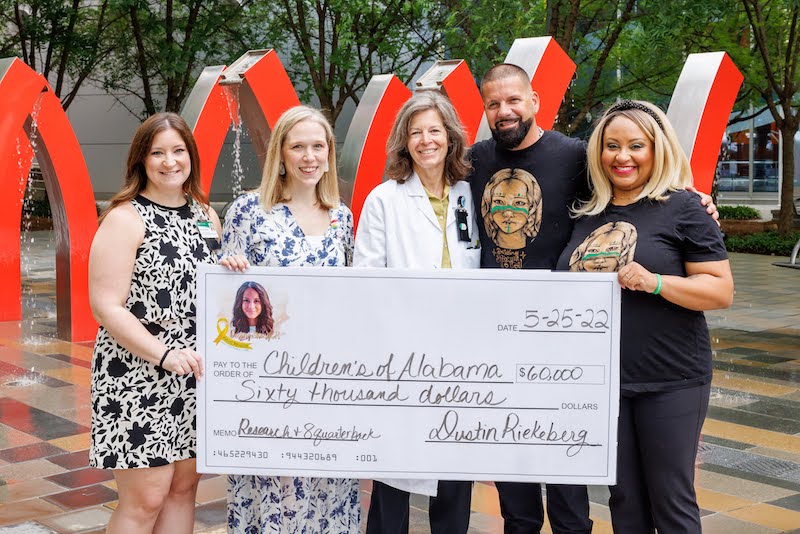 Lacretia and Dustin Riekeberg donated $60,000 to Children’s of Alabama in memory of their daughter, Destiny, who died from a rare liver cancer at the age of 9-years-old. The funds were raised through the Riekeberg’s organization, the Destiny StrongER Foundation, which is dedicated to fighting childhood cancer. (Contributed/Lacretia Riekeberg)

PELHAM – On Wednesday, May 25, Lacretia and Dustin Riekeberg presented a $60,000 check to Children’s of Alabama in memory of their daughter, Destiny.

Destiny Riekeberg battled a rare form of liver cancer for eight months before passing away in September 2020 at the age of 9-years-old. Her parents, broken-hearted, made the promise to fight childhood cancer and created the Destiny StrongER Foundation. Since its inception, the foundation has raised thousands of dollars in funds towards fighting the disease.

While she was fighting for her life, Destiny received treatment at Children’s of Alabama on 8 Quarterback, the name given to the hospital’s children’s cancer floor. The check marked the first of the Riekebergs’ donations to the hospital, and they said there are many more to come in the future as they continue to raise awareness.

It was raining outside, but that didn’t stop people from coming out to show their support. May 25 also marked Hepatoblastoma Awareness Day, which Lacretia said was chosen to further honor her daughter and those still fighting the disease.

“Our mission as the Destiny StrongER Foundation is to continue Destiny’s fight and to keep her legacy alive,” Lacretia said. “Her strength is what keeps us going. Destiny was bold in everything that she did in life, and we wanted to be bold in our first donation in her honor to childhood cancer.”

Destiny’s father became emotional as he presented the check and thanked the members of Children’s for their hard work and the care they showed his daughter.

“You’ve treated us like family, and I know you gave absolutely everything possible to my daughter,” he said.

Lacretia said they were fortunate as a new foundation to be able to donate the $60,000 to Children’s.

“Fifty thousand dollars will go towards research of the rare liver cancer, hepatoblastoma, that Destiny was diagnosed with, and $10,000 will go towards families on 8 Quarterback directly affected by cancer and still in the fight,” she said.

Lacretia added that she, her husband and everyone involved with the Destiny StrongER Foundation continue to live by the foundation’s motto: “Flight 707 Angel Destined for a cure.” Destiny passed away at 7:07 p.m. on September 17, 2020.

“We will continue her fight for a cure here on Earth,” Lacretia said.

“Talking about childhood cancer is not a negative conversation,” Dustin said. “It has to be up for a positive conversation to influence change, and no matter what means we go to to bring up that conversation, it’s a conversation every single day in our lives. We support you all and love you all, and we hope this is one step closer to the ultimate cure.”