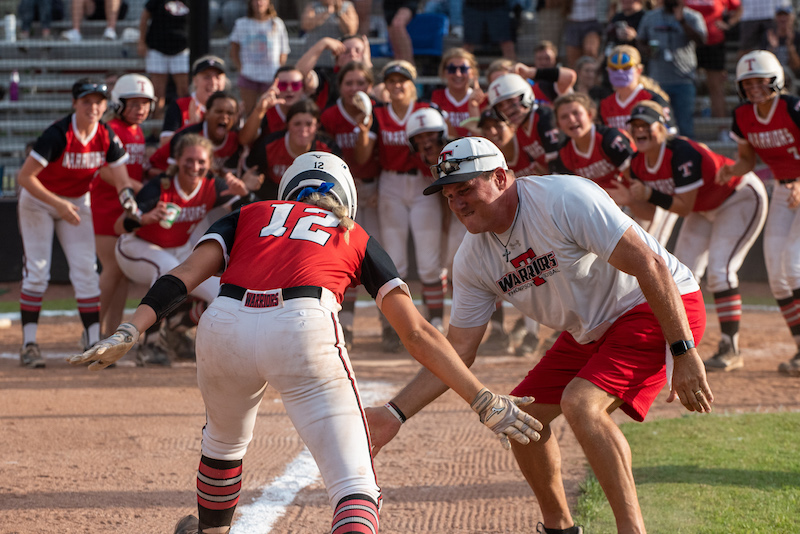 Thompson head coach Kevin Todd has been named this year’s Coach of the Year in Shelby County after winning the team’s third state championship in school history. (Reporter photo/Keith McCoy)

As the final out was caught in center field to cap off Thompson’s path to the Class 7A State Championship, head coach Kevin Todd was already in front of the fans giving emphatic fist pumps, before ultimately holding to No. 1 finders up in the air.

For the next several minutes, he couldn’t help but continually throw up the No. 1 sign and do so emphatically toward his fans and players after he helped bring back the school’s first state championship since back-to-back titles in 1998 and 1999.

“Amazing, right? Amazing,” he said. “I’m at a loss of words. God is good. We put all of our trust in him win or lose. These girls are fighters. They’re amazing. I don’t know if it’s hit me yet, but wow, I’m speechless.”

Now, after helping Thompson win its third state championship in school history, he has earned the right at Shelby County Softball Coach of the Year as well.

He helped the Warriors not only come back and win the title this year after last year’s day-one exit from the state tournament, but they did so this season by going a perfect 4-0 and ending with back-to-back wins against two-time defending champion Hewitt-Trussville.

Thompson beat Hewitt in eight innings to cap off day one of the state tournament and advance in the winner’s bracket to the championship before coming back a day later to win the title against the Huskies with a 2-0 shutout.

In the state tournament alone, the Warriors beat Spain Park 4-2 and Central-Phenix City 9-0 ahead of the two consecutive wins against the Huskies en route to the championship.

It was a path to the title that started a year ago when the Warriors saw what was possible with their entire team set to come back this season.

“Oh, that’s all we talked about. Last year, I’ll be honest with you, we were happy to get here,” head coach Kevin Todd said. “As a coach, we thought Hewitt was the team to beat last year, and that turned out to be true. I didn’t know if we could compete with them last year because we were young, but after we lost out, our next meeting we had, we set our goals.”

This year, the message was completely different on the way to the state championship game on Thursday, May 19.

“When we met in the locker room before we got on the bus to come down here, it was a different story this year,” Todd said. “It was, ‘We’re going to win it.’”

And that’s exactly what the Warriors were able to do.

With pitchers Eleanor DeBlock and Chalea Clemmons boasting more than 250 combined strikeouts and records of 20-4 and 16-1, respectively, and four batters hitting .453 or better at the plate, the Warriors were the one of the most complete and balanced teams in the state.

But Todd’s presence as the coach was key not only this year but in getting the team to believe this was a possibility the last several years.

Todd’s leadership, however, was an integral piece to the state championship, which was more than enough to earn him this year’s honor as the top coach in Shelby County.