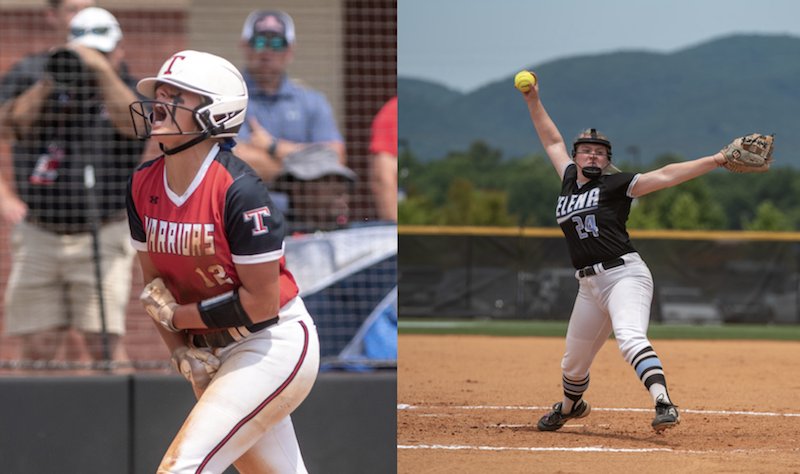 Thompson's Dailynn Motes has been named the county's Hitter of the Year, while Cam Bailey earned the honor of Pitcher of the Year. (Reporter photos/Keith McCoy)

When you’re looking for the best hitter and pitcher in the area, it can be a tough decision to make, especially after such a historic season that featured the county’s first state champion since 2016, but it boiled down to what you want most from the two—a hitter that gives you a chance to score runs and a pitcher who makes the ultimate difference.

Thompson’s Dailynn Motes and Helena’s Cam Bailey hit the nail on the head in each of those characteristics.

Motes did exactly what you wanted hitters to do, especially in the leadoff spot, which is reach base safely, be smart on the base path and score runs.

She led the county in hits this season with 72 and held a batting average of .503.

Almost as impressive as each of those categories is that she tied for the county lead in runs scored with 55, making the most of her hits. She did that thanks in large part to also leading the county in stolen bases after stealing 35 of 37 bases safely.

Her impressive offensive play as a sophomore helped Thompson win the 2022 Class 7A State Championship, which became the school’s third in school history and first since winning two straight in 1998 and 1999.

Of her county-high 72 hits, 12 were doubles, five were triples and two were home runs, while she also added 28 RBIs.

Her ability to consistently hit the ball made her more than deserving of this year’s Hitter of the Year award in Shelby County even with some of the state’s top hitters on her team and others throughout the county.

As for Bailey, Helena may not have been a team that advanced all the way to the Class 6A State Championship against Athens had it not been for her effort in the circle.

She was that important to the team as the leading pitcher, and pitched just about every inning of the state tournament for the Huskies to help them put together one of the most impressive runs in school history.

In addition to that, she also led the county with 257 strikeouts, which finished first by more than 50 strikeouts and in 18 less innings than the next closest pitcher.

That effort was more than enough to earn her this year’s Pitcher of the Year award in Shelby County.

Bailey finished the year with six shutouts and two no-hitters, while she only gave up 22 earned runs and 33 runs in 152 2/3 innings to help the Huskies make a run to the championship game.

In addition to those jaw-dropping pitching numbers, she was also one of the county’s top hitters at the plate.

The two players left their mark on two historic teams, as they each helped their team make a run to the final game of the season as two of the top teams in the state’s highest classifications.