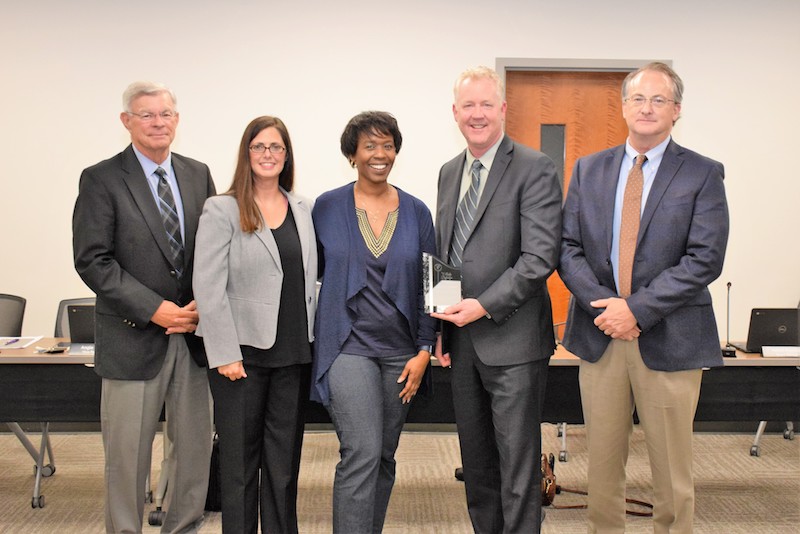 The Pelham Board of Education said goodbye to Superintendent Scott Coefield and honored Board member Sharon Samuel with a “You Make a Difference” plaque at their May 24 meeting. Coefield officially retired at the end of May and Samuel is set to retire from the BOE in June. (Contributed/Nicole Knight)

PELHAM – It was a bittersweet aura that filled the room at the Pelham Board of Education meeting on Tuesday, May 24 as the BOE bid farewell to Dr. Scott Coefield and honored Board member Sharon Samuel, whose term is set to end in June.

The meeting marked the end of Coefield’s time as superintendent of PCS. Dr. Chuck Ledbetter will take over in the role of superintendent, and Samuel’s spot on the Board will eventually be taken over by Shannon White, who was appointed to Samuel’s Place 4 back in April.

“As everyone knows, this is Dr. Coefield’s last meeting with us,” Board president Rick Rhoades said. “It’s all been said and done at this point, but I think it’s very important that this community knows what has transpired here in the eight years Dr. Coefield has been here with us. This is a very difficult job, I don’t think anyone knows how difficult this job was when it started.”

Rhoades explained that when the Pelham school system first formed, there were several people working in different directions with no real leader to set things in motion.

Then Coefield took the reins and everything changed. Rhoades looked at Coefield and told him he did not think what Coefield has accomplished as superintendent could be accomplished by many other people.

“You were the right person at the right place at the right time,” Rhoades said. “The debt Pelham owes you I’m not sure will ever be fully understood, but your Board knows it, and we appreciate it very much.”

Coefield thanked the first Board that he ever served with in the Pelham system, saying they were great, hardworking people who cared about Pelham’s kids. He then turned the attention to a smiling Sharon Samuel.

“I want to say this about Sharon Samuel,” Coefield said. “The thing that comes to mind, and I mean this with all affection I can, she is one tough lady. During our toughest times when we needed another voice to be heard, Sharon didn’t back down from anybody. Sharon, I will always respect you for that. I can’t tell you how much I respect you, but I want you to know personally how much you mean to me and the leadership you’ve shown this community when we went through some of the stuff that we went through.”

Coefield presented Samuel with a “You Make a Difference” plaque as a way of thanking her for her many years of dedication to making PCS what it is today.

Coefield’s retirement was acknowledged at the 2022 PHS graduation ceremony later that week, as well. Mayor Gary Waters wished Coefield the best in his retirement and in his future.

“I am truly going to miss Dr. Coefield,” Waters said. “We’ve been through a lot of things together…what I appreciate about Dr. Coefield is we have always been allies in pulling the same direction. I will miss his candor, I will miss his friendship, and I will miss most his common sense approach to conflict resolution.”

In other BOE business, Coefield honored the Pelham soccer team as part of the meeting’s Pelham Pride segment.

“We will be giving coach (Patrick) McDonald these certificates celebrating success and recognizing the accomplishments of the Pelham High School boys varsity soccer team 2022 6A state champions runner up,” Coefield said. “The Board wishes to extend its gratitude to the work and dedication it requires to accomplish this achievement. Thank you for your outstanding representation of Pelham City Schools.”

”This group was very selfless, they came together as a unit and as a team, understood what our strengths were and how we could accomplish the task at hand,” McDonald said. “Breaking school records is outstanding, and to be able to do that and be successful at the same time is something special. This is their full-time job being student athletes, and they dedicated a lot of hours to accomplish this goal. For them to succeed in the way they have, it really speaks to their character. I could not be more proud of them.”

Coach Sean Anderson took to the floor and praised his players for a spectacular season, citing their tight friendships and support for each other as one of the driving forces for their success.