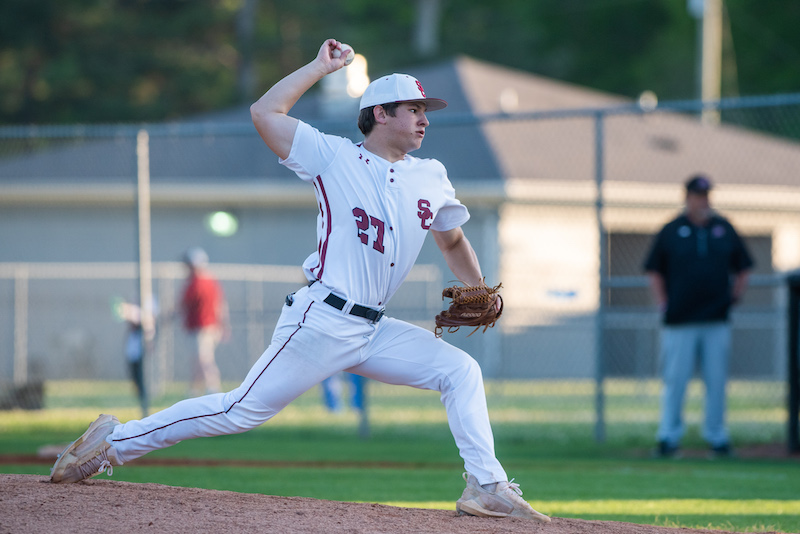 Shelby County pitcher Jacob Fox put together a special season for the Wildcats to earn a spot on this year’s All-County First Team. (Reporter photo/Keith McCoy)

It was a special baseball season across Shelby County thanks to six teams making the playoffs this year and five of those six advancing to at least the quarterfinals of the postseason, while the Pelham Panthers made a trip to the Class 6A State Championship series.

Coming into the season, each team had expectations set high, but many raised the bar and set new standards in their programs thanks to resurgent runs.

Much of that was thanks to an impressive crop of players, as the county was loaded with top talent from across the state. Those players poured in the work, and not only did it pay off in helping their teams, but now many have been named to this year’s All-County Team.

The 2022 team celebrates the top players from the county on a First Team and Second Team along with a group of honorable mention players.

Pitcher: Aiden Poe, freshman, Vincent. This year’s Pitcher of the Year in Shelby County, Poe put together an impressive 9-3 record as a freshman and led the county with 96 strikeouts and an ERA of 1.47. He finished the season with a county-high seven shutouts and had one no-hitter as well. Poe did all of that in pitching the most innings in the county as well at 76. He was also powerful at the plate with a .340 batting average featuring 36 hits and 29 RBIs.

Pitcher: Andrew Floyd, senior, Chelsea. Floyd finished the season with the second most strikeouts in the county at 83, while he held a 6-2 record against one of the state’s toughest schedules. He finished 6-2 overall with a 2.05 ERA and one shutout.

Pitcher: Jacob Fox, junior, Shelby County. Not only did Fox have the county’s highest win total, but he did so without losing the game thanks to an 11-0 record this season. He finished the year with a 2.13 ERA and was another pitcher with more than 60 strikeouts thanks to 68 Ks on the season. He picked up one shutout and allowed 21 earned runs in close to 70 innings of work.

Pitcher: Davis Gillespie, senior, Oak Mountain. The leader on the mound for Oak Mountain as part of a solid pitching crew, Gillespie finished third in the county with 78 strikeouts in 50 innings pitched, while he held an ERA of 2.22 en route to a 4-3 record against some of the state’s best teams. He only allowed 16 earned runs and 36 hits on the season. He also batted .304 at the plate with 35 hits and 25 RBIs, totaling a county-high eight home runs with the Eagles.

Catcher: Taylor Bush, senior, Oak Mountain. The most consistent hitter for the Eagles, Bush finished the season with a .361 batting average thanks to 39 hits, including 12 doubles and three home runs. He also finished with 19 RBIs.

First base: Cole Edwards, junior, Spain Park. Against the talent he faced, Edwards was the undoubted Hitter of the Year in Shelby County. Against some of the state’s best pitchers, he hit .421 this season with 45 total hits, including six doubles, four home runs and three triples. He finished the season with 32 RBIs. He also scored 29 runs and stole 21 of 24 bases safely while adding 24 walks.

Shortstop: Carter Sheehan, junior, Shelby County. Sheehan was right alongside his teammate at Shelby County, finishing the season with an average of .420 at the plate. He ended up leading the county in runs scored with 58, while he totaled 42 hits and 26 RBIs. He finished with seven doubles, one triple and one home run, while he led the county with 31 stolen bases.

Third base: Brady Waugh, junior, Briarwood. With another year to go, Waugh set himself up to be one of the state’s best players next year after finishing with a .464 batting average this season that included 32 hits in just 69 games. He brought home 19 runs and scored 23, while he finished the season with five doubles, three home runs and two triples.

Outfield: Eyan Davis, senior, Vincent. This year’s leader in Shelby County with a batting average of .490, Davis was big in a special season for the Vincent Yellow Jackets. He totaled 49 hits and 37 RBIs, while he scored 55 runs. He tied for third in doubles this season, while he finished second with seven home runs and added two triples.  Davis also added 22 stole bases in 24 attempts.

Outfield: Zac Carlisle, junior, Vincent. Just behind Davis was Carlisle, who finished the year with a .479 batting average to finish second in the county. He totaled 57 hits, which led the county, and 13 doubles, which was second in the county, while he also added five triples, two home runs, 43 runs scored and 35 RBIs. He also stole 25 of 27 bases safely.

Outfield: Drake McBride, sophomore, Thompson. McBride was a clutch hitter for the Thompson Warriors, totaling 41 RBIs on 41 hits this season. He finished with a batting average of .342 behind 10 doubles and six home runs, while he scored 30 runs and stole 12 of 12 bases safely.

Designated Hitter: Easton Fields, junior, Vincent. Another bat with a lot of pop for the Yellow Jackets, Fields finished with a .473 batting average thanks to 44 hits, including 12 doubles and seven home runs. He also totaled 32 RBIs and 30 runs scored.

Pitcher: Drake Meeks, junior, Briarwood. In 32 innings on the mound this season, Meeks put together an impressive showing with an ERA of 1.97 and a record of 4-0. He made the most of his time, striking out 52 batters and giving up nine earned runs and 21 hits, both top two marks in the county.

Pitcher: Lucas Thornton, junior, Spain Park. Not only did Thornton go up against some of the state’s best teams, but he got through the difficult schedule unscathed en route to a perfect 6-0 record. He finished the year with a 2.58 ERA and struck out 37 batters in 47 innings on the mound.

Pitcher: Connor Aderholt, senior, Shelby County. Aderholt did a little bit of everything for Shelby County, including a strong year on the mound that saw him finish 7-3 with a 2.05 ERA. He struck out 67 batters in the process, while he also added a save. In addition to his pitching presence, he also batted .364 at the plate with 39 hits, including a county-high 15 doubles. He totaled 43 RBIs, scored 25 runs and stole 10 bases safely.

Pitcher: Gavin Chandler, senior, Thompson. His record was even at 4-4 this season, but what stands out for Chandler on the mound for the Warriors is the 1.69 ERA. He allowed just 13 earned runs this season in 54 innings pitched and struck out 53 batters.

Pitcher: Maddox Macrory, senior, Oak Mountain. With a 1.61 ERA, Macrory was tough for opponents to figure out. He totaled 44 strikeouts and finished the season 4-1 with two shutouts and one no-hitter.

Catcher: Christian Kallaher, senior, Chelsea. The leader at the plate for the Hornets, Kallaher batted .330 with 33 hits. He finished in double figures with 10 doubles, while he added three home runs and two triples with 17 RBIs.

First base: Austin Wilson, junior, Shelby County. Wilson provided another big bat for the Wildcats thanks to a .314 average, while he put together 32 hits and 32 RBIs with 33 runs scored.

Shortstop: Mac Turner, senior, Helena. A top hitter for the Huskies, Turner finished the season with a .337 average at the plate thanks to 33 hits, including seven doubles, while he drove home 13 RBIs and scored 21 runs.

Third base: Christian Pritchett, senior, Pelham. It was hard to leave Pritchett off this year’s All-County Team after his special postseason run. As a utility player in the infield, he batted .302 at the plate behind 32 hits, while he drove home 24 runs and scored 18. He totaled seven doubles, three home runs and one triple. He was also the top pitcher for the Panthers with a 7-3 record and a 2.33 ERA, totaling 48 strikeouts.

Outfield: Matthew Windham, senior, Calera. Windham put together a special season for the Eagles thanks to an average of .375 at the plate. In 26 games this season, he totaled 27 hits, including seven doubles, one triple and one home run, while he drove home 12 runs and scored 20 with 11 stolen bases.

Outfield: Brodie Holcomb, senior, Thompson. With a .319 average, Brodie Holcomb was one of several Thompson players to finish with at least 38 hits. Not only did he hit that number, but he led the Warriors in runs scored with 36, while he also finished second on the team with 34 RBIs. Beyond that, he totaled six doubles, four triples, which finished tied for second in the county, and three home runs.

Outfield: Ben Pearman, junior, Thompson. Pearman was similar to Holcomb with an average of .320 for the Warriors thanks to 39 hits. He finished the season with 31 runs scored and 25 RBIs, while he totaled nine doubles and four homer uns.

Designated Hitter: Reece Mims, sophomore, Helena. Mims was the leader at the plate for the area champs thanks to a batting average of .373. He finished the season with 28 hits, 19 RBIs and 18 runs scored. He also finished in a tie for third with five home runs and put together four doubles.