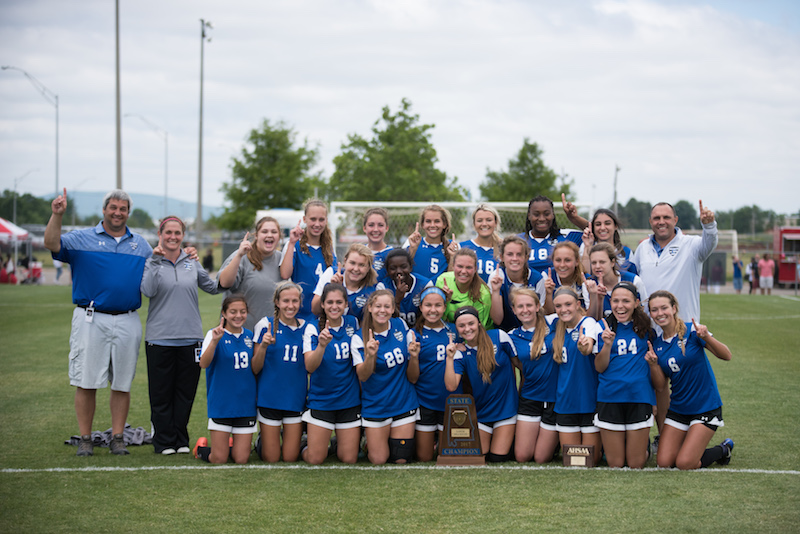 Chelsea head girls soccer coach Jonathan Hammett has stepped down as the team’s coach after 14 seasons with the Hornets and more than 20 as a soccer coach. (File)

CHELSEA – When he first got into coaching more than 20 years ago, Jonathan Hammett wanted to work his way up to becoming a high school football coach.

Now, 25 years later, he’s coached his last game, but it never reached the point he thought it would.

Instead, following the 2022 soccer season, Hammett stepped down as one of the most decorated soccer coaches in the state over the last 20-plus years.

“God had a different plan for me and it worked out well,” Hammett said. “I’ve been fortunate and blessed over the years to have those good soccer players. For someone with the lack of experience I had in soccer, a sport I wasn’t planning to coach at first, I am beyond grateful for what it has brought to my life.”

Hammett decided to step down as head coach of the Chelsea High School girls soccer team following the 2022 season because of the toll and time commitment the job took, saying it had become especially draining the last two years because of everything that goes into making a program one of the best in the state.

“The decision itself had been creeping in starting last year,” he said. “The way I would feel during the season physically. Last season, I started to notice it. It was making it not as enjoyable on top of other things that were starting to overwhelm and weigh on me. I was like, ‘Well, let me give it one more year to see if it gets any better.’”

But it wasn’t meant to be. Hammett said the 2022 season saw the burnout and mental drain from the job get progressively worse.

“Whether it be an away game or home game, there is so much that goes into those,” he said. “The next day is tough. It got to a point where it was miserable. I just didn’t see how I could continue on because I didn’t feel like that’s what the players deserved or what the program deserved or demanded.”

That led to him making the difficult decision to step down, one that was right for him, but nonetheless, an emotional rollercoaster as he decided to leave behind something that meant the world to him for a large portion of his adult life.

New to the game

Finding his path to becoming one of the state’s top girls soccer coaches got off to an interesting start as a kid for Hammett, who spent the majority of his childhood not even knowing what soccer was.

“It’s one of those deals where, growing up, I didn’t even play soccer,” he said. “It really wasn’t even considered.”

Hammett said there was one time where the parks and rec center put together a season, but as he remembers it, it turned into more of one organized game.

That became his only reference to soccer until 1997 when a job opened at Pinson Valley High School for a boys soccer coach.

With school already in progress for the spring semester, Hammett told the hiring principal that he had no experience with soccer, but the school just wanted somebody that could oversee the program more than coach.

What Hammett and the school didn’t know then was the coach that was about to be born.

The first team he ever coached made the playoffs and the next won the area championship. Hammett spent four years coaching the Indians to get his career started on the right path.

“That’s where it all started,” he said. “Looking back on it, I didn’t appreciate it, but I had some really good soccer players there back then. We had guys playing in clubs and had good athletes who played, including football players, basketball players, wrestlers and cross country runners.”

Hammett, however, didn’t realize his future had been set against a competing coach.

Competing against one another back in 1999 in a matchup between Pinson Valley and Erwin High School, Hammett was able to get the better of Lee Miller.

At that time, neither knew they were on a collision course to join forces at Chelsea High School a few years later.

They met again in 2000 when Miller took over at Hewitt-Trussville. This time around, Miller was able to even their record against one another with a 4-3 “barn-burner” win over Hammett.

Standing in the office talking with then Athletic Director Wade Waldrop, Hammett started asking about the next coach.

“He said, ‘Yeah, we have a guy coming over from Thompson named Lee Miller,’” Hammett said. “I immediately stopped him and said, ‘Wait, did he coach at Erwin and Hewitt?”

That’s when Hammett realized a familiar face was coming to join him at Chelsea.

Miller, who had moved to Florida to coach for a brief stint before joining Thompson as an assistant, was hired to take over both the Chelsea boys and girls programs with Hammett as his assistant coach for the two teams.

Both soon realized one needed to coach the girls and the other needed to focus on the boys.

“I went to Wade and told him it wasn’t in the best interest of either program to have a single coach coaching both teams,” Miller said. “He agreed, so I was able to tell coach Hammett I was handing him the keys to the Cadillac. We knew the program was about to take off, so it was the right time to make that move.”

Thus, one of the best coaching duos for boys and girls soccer in the Birmingham-metro area started.

In 2009, Hammett officially took over as the head coach of the Chelsea girls, beginning a special next 14 seasons that saw several historic milestones.

During his tenure, he made the girls soccer team the first of any sports team at Chelsea to compete for a team championship.

That came just two years into his new gig, as the Hornets finished runner-up in Class 5A in 2011.

Then, with most players back for the 2012 season, Chelsea was able to go on a redemption path to claim the Class 5A State Championship for the first time in school history.

The Hornets and Hammett went on to win the title again in 2017, this time in Class 6A, while they finished as runner-up again in 2019 and lost to eventual state champion John Carroll in an eighth-round PK in the second round of the 2016 playoffs.

And like any coach, he loved the titles and what his players were able to accomplish, but the losses in 2016 and 2019 are ones that will stick with him.

“Those are a lot of great memories, some better than others,” Hammett said. “It’s the ones you lose that stick with you. I’ll never get over the 2016 and 2019 losses because those were possibly two more state championships, one for sure.”

Nonetheless, he looks back proudly on what the team was able to accomplish over the past 14 seasons.

“Just to see where it was when I was an assistant coach, we had some good players, but they struggled and it was more of a social event,” he said. “As time went on, we started getting more competitive soccer players and were able to build something special.”

It was that consistency that sticks with Miller, who remains the coach of the boys team.

“He was a natural,” Miller said. “He won two state championships and was a runner-up twice. He probably could have won five or six championships. Chelsea has been lucky to have stability there in the girls program. Other programs have had three, four, five, six, eight coaching changes in the time he has been just at Chelsea. There is a lot of stability in that. There’s a lot of comfort in knowing he is here and this is the way the program will run. It led to winning and more winning. It kept the ball rolling. People got accustomed to seeing that and he lived up to it.”

Now, after 25 years coaching soccer in the Birmingham-metro area and 14 seasons at Chelsea, Hammett has said goodbye to the coaching side after winning more than 200 games, including a majority of them at Chelsea.

And while it was a decision he needed to make, it’s one that is still emotional for Hammett to think about.

“It will always be the players,” Hammett said through an emotional tone about what he will miss most. “I’ll miss the player-coach relationship. It’s different. You see 120-130 kids every day in class teaching and doing all of those things, but the players are your group. You see them, once the season starts, probably an average of 2-4 hours every day. You’re around your regular classes 50 minutes per day.”

He also said he’ll miss the good friendships he created with other coaches over the years.

“He managed things well,” Miller said. “Coaching is just a small part of the job. You’re managing everything around the program. You have different egos and have to turn that into a collective team. He did a good job of managing all of the parts, whether it be the people or the parts that he had.”

For Hammett, the decision to step down became much easier when a former player and state champion he coached decided to re-enter the program at the perfect time.

In desperate need of a junior varsity coach ahead of the 2021 season, Hammett got a text from Alli Cochran Gooch.

“Randomly out of nowhere, I hadn’t talked to Alli in years, and she texted me out of the blue,” Hammett said. “She told me she was interested in getting her foot in the door as a coach and teacher and asked if I needed any help in soccer. The answer was a swift yes.”

Hammett had originally resigned himself to having to coach both the varsity and junior varsity team, which was going to add even more exhaustion to his job.

With Gooch stepping in, however, he not only got a junior varsity coach, but a future head coach.

He was able to watch her develop the JV team over the last two years and that made him feel comfortable in passing the keys to the Cadillac to his successor.

“Having her there made it a little easier on me, but it wasn’t easy at all,” Hammett said. “You’ve devoted 20-plus years of coaching at different schools and sports. That becomes a very difficult decision to make. It was not easy. I’m emotional talking about it quite frankly. The program is at a point where it demanded more than I was able to give. That’s a hard reality to come to. But she helped flip the script coming out of that 2021 season with how I was feeling. I thought it would be a good opportunity.”

The two talked about it a lot, and he was eventually able to help her become the team’s next head coach to help leave the program in trustworthy hands.

“She has the energy, the passion and she has a stake in the program as well as a former player,” Hammett said. “You don’t always as a coach, and maybe it’s different in other sports, you don’t always have the opportunity to have an impact on who is hired to follow you, so I’ve been fortunate in that respect. I feel like someone is there who will have the same level of passion and care for the players and the program.”

And while he may no longer be running the program, you won’t have to look far to find Hammett in the future. Look around the stands during the next season, and you’ll likely still see him cheering on Chelsea athletics, especially the girls soccer team.