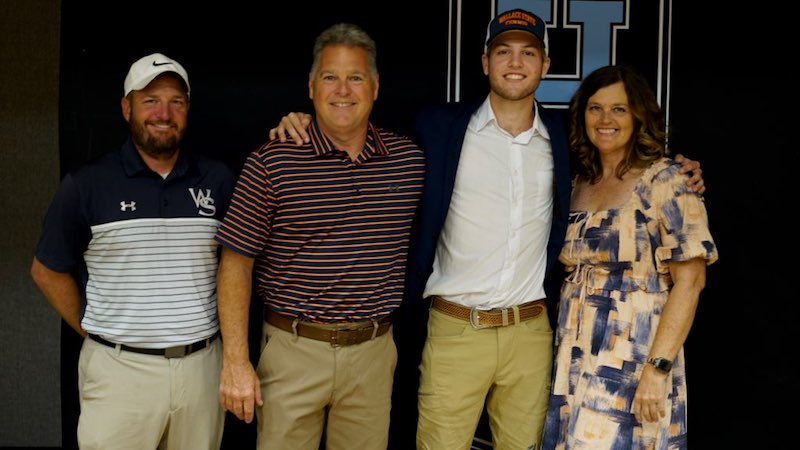 Helena tennis player Trey Lambert has signed a two-year tennis scholarship with Wallace State, where he will play the sport at a college level. Lambert has contributed to over 125 court wins for the Helena Huskies in his playing career. (Contributed/Jennifer Lambert)

HELENA – It was a very important day for Helena’s Trey Lambert on Thursday, May 12 as he took his next big step in life signing a two-year scholarship with Wallace State to play tennis.

Lambert was surrounded by family, friends and coaches at the Helena Sports Complex, where the signing took place, and he was all smiles as he put pen to paper.

This major accomplishment is the result of a rather impressive tennis résumé for someone of Lambert’s age. Lambert played on the high school tennis team as a seventh and eighth grader.   He won the Shelby County Tournament. He won 300 points playing doubles tournaments in the junior Boys’ 18 category of the United States Tennis Association.

Lambert also won sectionals his senior year in singles and doubles and contributed to the Helena team making it to State, where he made it to the semi-finals with his doubles partner Carson Wood. Overall, Lambert has contributed over 125 court wins for the Helena Huskies.

Lambert said he was immensely grateful toward Wallace State for choosing him to play tennis at their college.

“It’s very rewarding that hard work pays off,” he said.

His parents were beaming with pride at their son’s accomplishment.

“We we’re very overwhelmed that he could actually attend college on a tennis scholarship,” his mother Jennifer said. “We are thrilled to watch him play tennis at a college level. Trey has said ‘Go Huskies’ for many, many years, and now it’s time to say ‘Go Lions!’”

Lambert will start at Wallace State in August. After he fulfills his two-year commitment, he said he plans on attending a Division I college where he hopes to continue playing tennis.