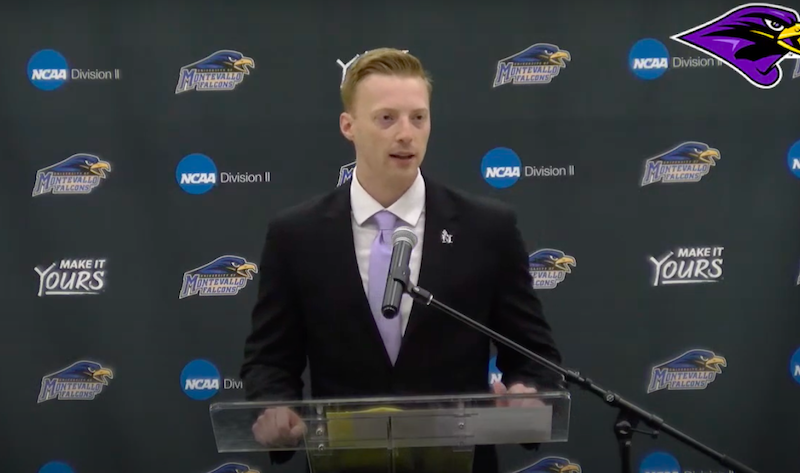 Anthony Komara talks at a press conference after being announced as the next head basketball coach of the University of Montevallo. (Reporter photo/Alec Etheredge)

MONTEVALLO – The University of Montevallo named a new head basketball coach for the first time in 20 years on Tuesday, June 7, and they didn’t have to go far to find their man.

Inside Trustmark Arena, UM Athletic Director Mark Richard took to the podium and announced University of Alabama Huntsville assistant coach Anthony Komara as the next leader of the Falcons.

“He has been a winner over the past nine years serving as the assistant and associate head coach at the University of Alabama Huntsville,” Richard said. “His goal is to graduate student athletes and equip them for life, have a great experience and win championships.”

Richard said there were 130 applicants, which was exciting for the program, while the candidates were narrowed down to 16 and then five. But three things stuck out for Richard when it came to him and the committee landing on Komara.

“In his interview, three things jumped out,” he said. “One was his passion for the sport, which exuded how much he cares about the game of basketball and the student athletes. He also wants student athletes on his team to not only know you can win, but when you lose, you still have the right people in place. And he wants to coach a team that is still playing basketball in March and excited to be playing in March.”

Komara will take over for former coach Danny Young, who spent the previous 19 seasons at the school and led the Falcons to nine 20-win seasons, a national title game appearance in 2012, 11 NCAA Tournament appearances, eight Sweet 16 appearances and three Elite Eight appearances. Young finished as the winningest coach in school history with a record of 372-209.

Now, Komara will look to take Montevallo back to the national stage after experiencing success of his own at UAH.

“It’s an honor to be here,” Komara said. “I’m humbled and excited. There are a lot of emotions, so I’ll try not to get too emotional up here. I’m just really thankful and honored for this privilege and opportunity, and I won’t take it lightly.”

It’s a dream come true for Komara, who said he had made it a goal for quite some time to become a head coach at this level of play, but he made it clear he wanted to do it at a place that fit him.

Throughout the hiring process, it became clear, Montevallo was that place.

“As we moved through the process and as I got to share my vision for the committee, we found that what they were looking for and what I wanted to bring were in total alignment,” Komara said. “I think that is why this is a great fit and why I belong here.”

Komara said he got to sit down with several of the current coaches in the athletic department during the interview process and listen to why they love Montevallo and how much they care for and love the student athletes.

“The more they talked and the more I listened, I really felt called to be here,” he said. “I felt this was the place I belonged. More importantly, the people in that room were really good people. You want to be around good people. As we got further in the process, that couldn’t have been clearer.”

Komara thanked former UAH head coach Lennie Acuff, who gave him his start in coaching fresh out of college, while he then thanked current UAH coach John Shulman, who gave Komara more responsibility the last three years after taking over as the new head coach.

He also announced that current UM assistant Byron Mincey will remain on the staff alongside him.

“The way I want to do it won’t be all about X’s and O’s, it’s going to be about bringing in great people, and that starts with the staff,” Komara said. “The most important thing when I got the job and I was looking at who I was going to hire was it had to be someone with an elite work ethic and uncompromising high character and truly cares about these young men as more than basketball players while also wanting to be at Montevallo.”

The more he asked around, the more people told him he had exactly who he was looking for right there in the room with him.

“The more I talked with him, the more it became clear he was the right man for the job,” Komara said of Mincey. “His character is incredible. He is a great man, and the first thing he said when we talked on the phone was that he wants to make this the best he can for the young men. At that moment, I knew he was the guy.”

Komara said together, they will aim to bring in high-character players to build the program, and when that happens, the winning will take care of itself.

“This men’s basketball program has a ton of history,” he said. “My goal is to get it back to that level. I want to get us back to competing on a national level and competing for conference championships year in and year out.”