‘Gertie’ to assist with beautification of Main Street 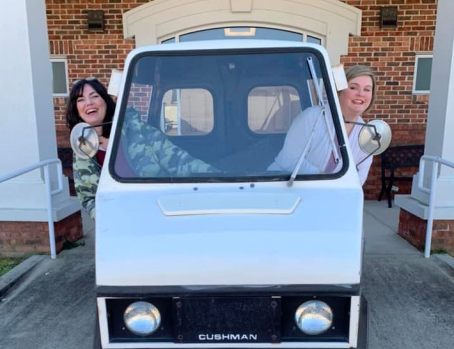 Columbiana Main Street will take advantage of a 1988 Cushman Truckster to help with tasks thanks to the refurbishment of the vehicle by students at CTEC, which is run by Shelby County Schools. (Contributed) 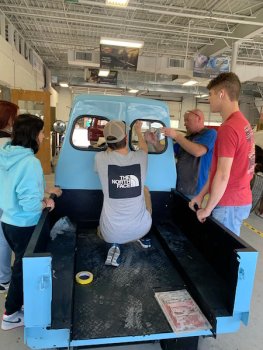 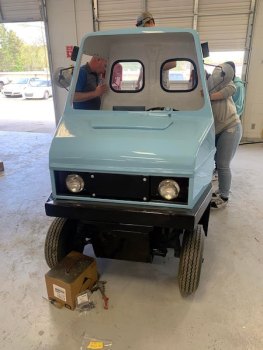 COLUMBIANA – The newest member of Columbiana Main Street is not a person, but has plenty of personality. Meet Gertie, the 1988 Cushman Truckster complete with a custom-installed water tank that will keep flowers alongside the city’s main thoroughfare beautiful and blooming.

The project is the baby of Columbiana Main Street’s design committee and CTEC students, with numerous other individuals helping out along the way.

The Cushman sports the Columbiana Main Street logo and is named for the late Gertie Jones, who owned and operated a floral shop on Main Street.

‘Gertie’ was the name residents chose in an online vote that was held on Facebook, and it seemed to fit perfectly considering the vehicle’s purpose.

“We needed a way to water (the flowers),” said Columbiana Main Street Director Sasha Johns. “There’s not really a spigot on Main Street that can reach all the baskets.”

Johns credited the husband of Columbiana Manager of Community Affairs and Senior Services Ali Payne with discovering the Cushman, and it was decided that a water tank and pump could be added to create a convenient way to water plants downtown.

“It came to me that would be a really good community project to do with one of the CTEC classes,” Johns said.

The Cushman scooter company began in 1903 in Lincoln, Nebraska and incorporated as Cushman Motor Works in 1913. The company made engines for farm equipment, lawn mowers, boats and pumps, and began making its Auto-Glide scooter in 1936 to boost engine sales during the Great Depression.

Cushman scooters were used by the U.S. Armed Forces throughout World War II as well as after the war.

Mark McCary, collision repair technology instructor at CTEC, said his students worked on the vehicle from late February through the first week of April, sanding the body, preparing fiberglass, mounting hardware and spraying the bed liner and floor.

The class even collaborated with Main Street on ideas for the vehicle’s design and modifications, and Gertie was featured at Columbiana’s Touch a Truck event in April.

“That was sort of its first unveil,” McCary said. “The kids really enjoyed the project. It was something that they invested in because they knew it was going back to the community and would be seen, so everybody was 110-percent invested in the project.”

Wooden panels were added to the side to give Gertie a more vintage look, and construction technology instructor Blake Ray planed the wood for the project. The students then sanded the panels and added a clear coat; students from both classes were involved in installing the panels.

The Main Street logo was added to the front, and the vehicle’s color scheme follows that of the logo—blue, green and tan. Scott Owen of Owen Arts donated the logo, and Kellis Turfgrass Management donated the water tank and pump. Other members of the community donated items as well.

“It was definitely unique and different,” McCary said. “They came right together and met the deadlines on getting it out the door. I think it was a good opportunity to partner with the local community along with the school; that way the kids give back also.”

Johns said that the name ‘Gertie’ was first suggested by Kim Foster, who coincidentally did not know about Gertie Jones.

“She just liked the name,” Johns explained. “She did not know there was a local historical person named Gertie Jones.”

Jones was known for her flowers as well as her hospitality, so it should come as no surprise that she overwhelmingly won the vote for the vehicle’s namesake.

Johns hinted that in the coming months, Columbiana Main Street might be looking for an Eagle Scout to take on the project of building a garage to serve as a permanent home for Gertie.

“We realize she needs a long-term home,” Johns said.