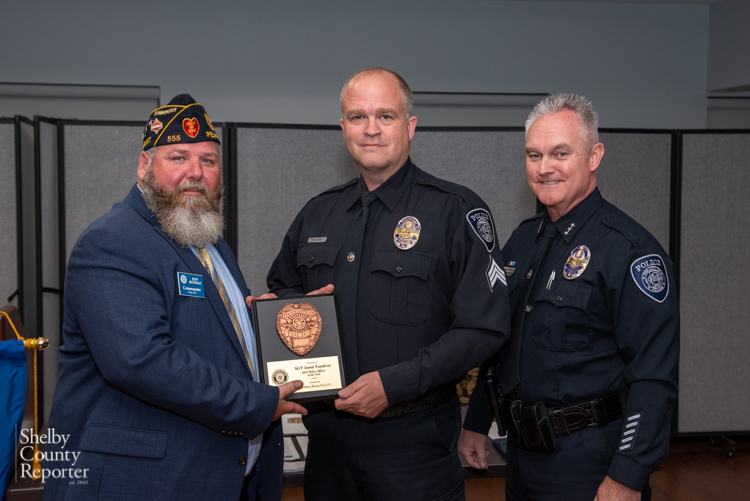 PELHAM – On Thursday evening, June 2, Pelham Police Department Sgt. Jason Vandiver was honored with the 2022 Officer of the Year Award.

The award presentation took place at the Pelham Senior Center at the beginning of the meeting of the American Legion Matthew Blount Post 555. The organization, which is dedicated to spreading awareness and support of veterans, holds the awards ceremony every year to honor first responders who exemplify true dedication in serving the community.

Police Chief Pat Cheatwood began by thanking those present for their work in defending their country and saying it was an honor to be there. He continued that there has been a significant lapse in individuals who want to serve in law enforcement.

“It’s tough to find people these days that really care about their community and they want to serve them to the best of their ability,” he said. “That’s the type of employees that we look for, and it’s getting harder and harder to find these individuals.”

Cheatwood called Vandiver up to the front of the room and expressed that Vandiver was not only a coworker, but a dear friend as well. Vandiver’s family was also present for the honor, and Cheatwood acknowledged them in his speech.

“I’ve known this family for 13 or 14 years, and not only are we coworkers, but his family was at my house for Memorial Day,” Cheatwood said. “I can tell you this man is a great police officer, but he’s also a great dad and a great husband.”

Vandiver’s credits show a life-long commitment to law enforcement and his patriotism for his country. He served in the U.S. Army for eight years as a specialist and served in law enforcement for the past 20 years, 15 of which were with the Pelham Police Department. He as also been declared an Eagle Scout and has served as a troop leader for Boy Scouts of America.

“Sergeant Vandiver is a true public servant in every aspect,” Cheatwood said. “He serves people on and off duty. He will help anyone at any time, and I have seen it firsthand. He is always willing to listen, help, direct and comfort anyone in need. He always gives his most treasured commodity: his time. He has led several small groups through his church including men’s groups, parenting groups, marriage groups, several of those I’ve been a part of.”

Cheatwood continued that Vandiver has served almost every role in the department from patrol officer, desk officer, evidence technician and detective all prior to being promoted to sergeant. But his dedication to the force has not stopped there. Vandiver has always demonstrated a devotion to helping those around him and to solving any issues that may be present. He has even been known to stay later than other administration staff to make sure there are no loose ends.

“His dedication to the job and his responsibilities should be an example for everyone who follows him. Sergeant Vandiver is exceptional in making sure tasks and projects are completed. Having follow up conversations and being able to have answers to questions are his strengths.”

Cheatwood said Vandiver has spent the past two years upgrading the department’s technology including license plate readers and safety cameras throughout the city, and these advances have led to several cases being solved quickly and efficiently.

“The work ethic, service, care, dedication, commitment and vision that Sergeant Vandiver brings to our department are all reasons that I feel he should be the recipient of this year’s Officer of the Year Award,” Cheatwood said. “People like him make the work place enjoyable, productive and efficient. Because of Sergeant Vandiver, the men and women of our department will continue to achieve our mission of being progressive and to fight against crime, serve in a professional manner and to be dedicated to the citizens we serve.”