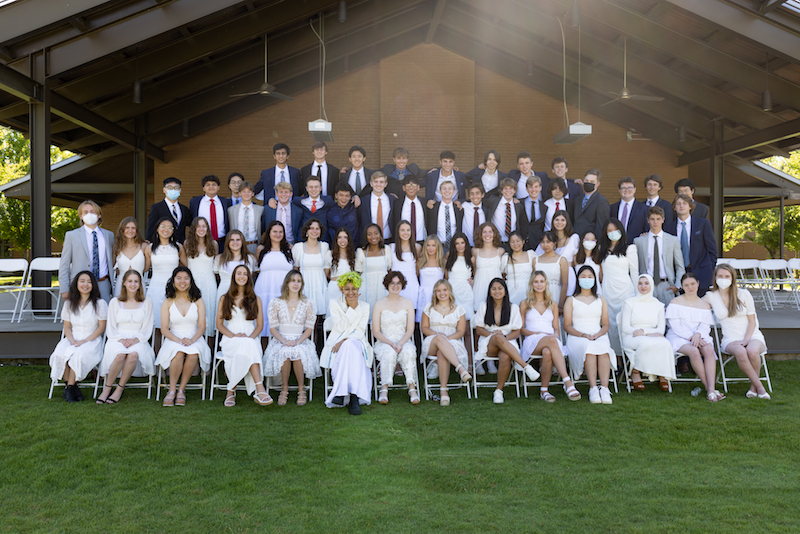 The students of Indian Springs School's 2022 graduating class held their graduation on the McLean Lawn of the school on Friday morning, May 27. (Contributed)

PELHAM – The sun shone bright on the campus of Indian Springs School on Friday, May 27 as the 2022 seniors filed onto the McLean Lawn for their graduation ceremony.

It was the school’s 68th commencement, though as the students were all smiles filing into their seats, there were several individuals who were not able to attend due to unfortunate circumstances.

“I had hoped that this graduation would be free of any mention of the words COVID or pandemic,” said Scott Schamberger, the head of Indian Springs School. “Unfortunately, that is not the case, and we have had some members of the community test positive recently. This was not our plan nor does it seem fair, but it does serve as a reminder that sometimes things do not go according to plan.”

Schamberger praised the members of the class of 2022 for their hard work and dedication during times of uncertainty and their courageousness in the face of life’s obstacles.

“Few, if any accomplishments are individual successes,” he said. “They are instead shared by those who have given so generously of themselves to make these individual accomplishments possible. Accomplishments made even greater by loved ones who challenged us to think bigger, think better and think more boldly than we would have ever thought possible.”

He then posed to the seniors to ask themselves what they want their legacy to be when they leave Indian Springs, and go forth and live their life to the fullest in making that legacy a reality.

“Life is a team sport, and you cannot submit your legacy without the help of others,” he said.  “You have to hold others accountable with the small details. Cutting corners in life will not allow you to achieve greatness.”

Schamberger then revealed that each student would be given a copy of David Foster Wallace’s book “This is Water.” Each book will be inscribed with a special message to individual students from a teacher who has had a large impact on them.

Senior Emma Peng took to the podium to speak on behalf of her classmate and class president Frankie Shen, who was absent for the ceremony.

Peng recited a speech as prepared by Shen that spoke of his culture shock moving to Birmingham from Chicago. Peng, eloquently speaking Shen’s words, talked about becoming acquainted with the large campus and being introduced to a lifestyle where teachers became friends, students were encouraged to explore the outdoors and, she read jokingly, “discovering something called Waffle House.”

“Through all of these things, I not only learned to enjoy things in my present moment, but to also look ahead in life and celebrate things,” Peng read. “I used to imagine everything in life being so different, then things in the past four years were actually so different that I cannot believe they actually happened. In retrospect, the class of 2022’s story is bizarre, adventurous, sometimes painful and leading to confusion, but I believe we have the legacy of overcoming those things.”

The Indian Springs choir then performed a rendition of the hymn “Homeward Bound” before the school’s valedictorian “mayor” Andrew Schwebel made his speech.

Schwebel told the crowd being a student of Indian Springs taught him that opening up about your emotions and what you’re feeling inside allows you to form tighter bonds and interpersonal connections with those around you.

“I don’t think there are many schools in the whole world that are like Indian Springs that teach you to think outside the box and to rethink social norms if you think there is something that can be gained from it,” he said. “The truth is, this is the last time we’re all going to be together in one place, and we’re going out into the real world, which is a little less forgiving. Attending Indian Springs, we really are more prepared than like 95 percent of our peers who go out into this world, and that’s really an unfair state of affairs because that gives us a lot of power, and we have to figure out how to use that power.”

The class’s second mayor, Joseph Katz, was also absent from the ceremony. Katz’s classmate, Bruce Lanier, spoke on his behalf.

“What Joseph has done for this community as a student, a peer and a mayor, you can’t compare it to much else,” he said.

Lanier’s speech discussed the many things the students of Indian Springs would miss about each other, poking fun at his classmates idiosyncrasies and mentioning various inside jokes. He wrapped up the speech by encouraging his classmates to go out into the world and hold onto their Indian Springs experiences.

“Learning through living has a lot to do with making mistakes in a forgiving environment, but it is also about discovering the new aspects of ourselves in an inclusive setting,” he said. “As Andrew so eloquently put it, ‘rethinking social norms when there is something to be gained from it,’ even if all one stands to gain is a new perspective, a fond memory or a good laugh.”