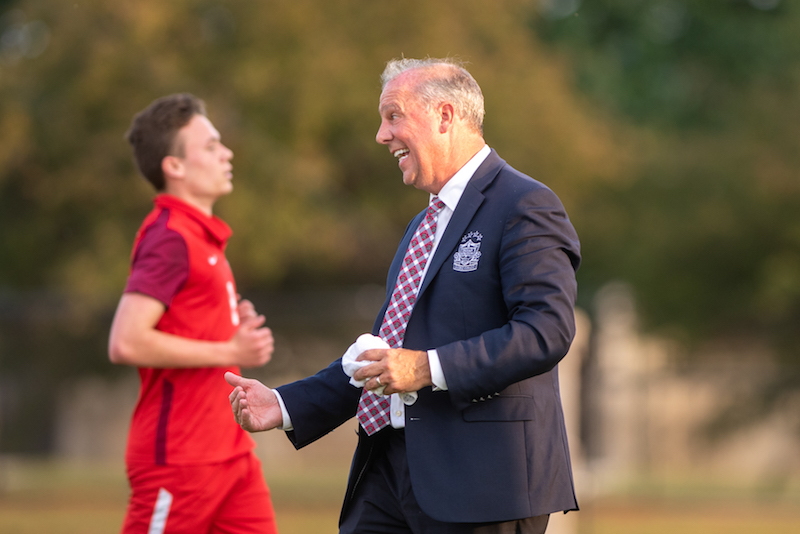 Entering the 2022 soccer season fresh off a Class 4A-5A State Championship the season before, Indian Springs head soccer coach Rik Tozzi had two challenges ahead of him—stay healthy and keep his team humble.

With the majority of the team back from the team’s run to the title the year before, including 13 seniors, Tozzi knew the expectation was to win again, but the hurdle of doing so was one of the most difficult in sports.

On Friday, May 13, Indian Springs proved it could leap that hurdle when the team repeated as state champions in a hard-fought 1-0 victory against Russellville one night after a thrilling penalty-kick victory against then No. 1 Montgomery Academy.

With those two wins, the second consecutive title and the track record Springs was able to put together during the 2022 season against one of the state’s toughest schedules, Tozzi did more than enough to earn this year’s Shelby County Boys Soccer Coach of the Year honor.

“The fact that these guys ground out two games like that when we didn’t have legs a lot of places, as a coach, you can’t ask for more than that,” Tozzi said of his team’s effort in the Final Four. “Wins like that are almost more gratifying than if we come out and look like a professional team, but they fought through it to win, and I couldn’t ask for anything more.”

It closed out a season in which Indian Springs finished 18-2-5 overall against some of the state’s best teams from every classification, including matchups against most No. 1 teams.

Springs finished the season scoring 134 goals and giving up just 15 goals with 18 shutouts, including eight in a row and 12 of 13 games at one point this season.

They finished with an overall record of 21-2-5 this season, while the two state championship teams the last two years combined for a record of 45-4-6.

That combined with getting his team to play in the moment throughout the 2022 season showcases Tozzi’s ability to lead his team in the biggest moments, earning him this year’s Coach of the Year honor.

This year’s championship marked the fifth for Tozzi in his tenure at Indian Springs and the second in the 4A-5A classification.

Tozzi, however, knows the success wouldn’t have been possible the last two years without the players he had along for the special ride.

“I’m losing 13 seniors. I didn’t even know my school had 13 seniors, frankly,” Tozzi said with a laugh. “I’m losing my son and a number of guys he grew up playing with. It will probably hit me a little bit. I mean, I honestly think this group could have won three in a row if COVID hadn’t struck. That’s how special this group has been.”

Now attention turns to the possibility of a repeat, but Indian Springs will have to do so with several of the top players graduating and making a jump up to Class 6A.

Tozzi and the team, however, will continue to have high expectations.