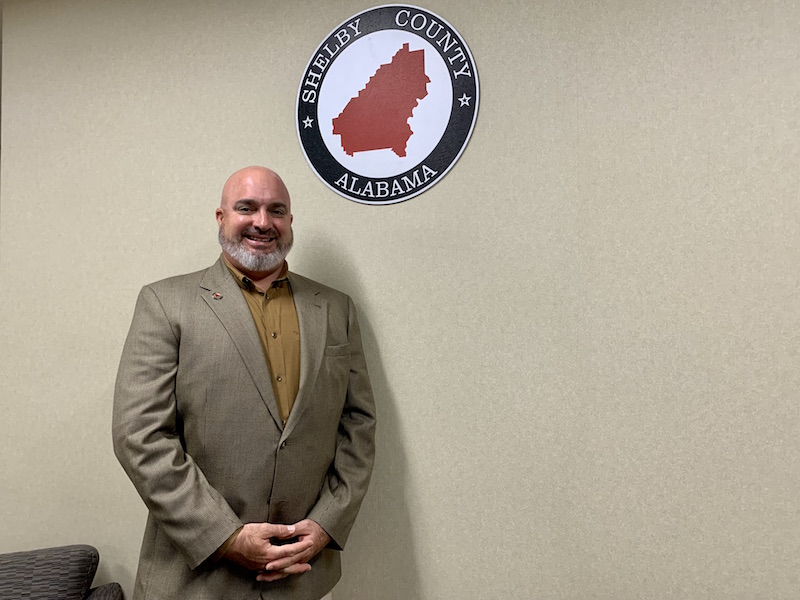 “Mike does a great job, and he knows a ton of people,” Scroggins added. “We’re blessed to have him as part of the staff.”

Asdel served in the U.S. Air Force for 21 years and worked for the U.S. Department of Veterans Affairs.

“My background is law enforcement in the Air Force and safety and disaster preparedness, and I retired and went to the VA hospital in Birmingham,” Asdel said. “I was responsible for that hospital (and was) disaster preparedness coordinator for all of our clinics in North Alabama. I had about 10 facilities I was responsible for and all the veterans in Central to North Alabama whenever a disaster struck.”

Asdel said he was hired as deputy director of the Shelby County EMA on March 16 and officially became EMA director on June 10.

“It’s an honor to be here,” Asdel said. “I was glad to be invited to the table of Shelby County. I’m here to serve and not to be served. Thank you for the opportunity.”

Regarding the probate records project, the Commission voted to award the bid to the only responsive bidder, Granicus LLC, for $282,173.

Scroggins said the lowest bidder for the project failed to meet several of the project requirements.

“The scope of this project is something that I’m really excited about for Shelby County,” Shelby County Probate Judge Allison Boyd said. “It’s going to take our records back to record 1, which is 1819, all the way up to 1972, which is where we currently have digital records for. Not only is it a scanning project, but it is to where they will be indexed and searchable along with any other records. It would be just the same as if it was filed yesterday, which is seamless integration.”

• Approved a pavement rehabilitation project for the Shelby County Airport.

• Approved a tax collection resolution that allows for the county’s receipt of local taxes on the day they are received rather than when they are postmarked.