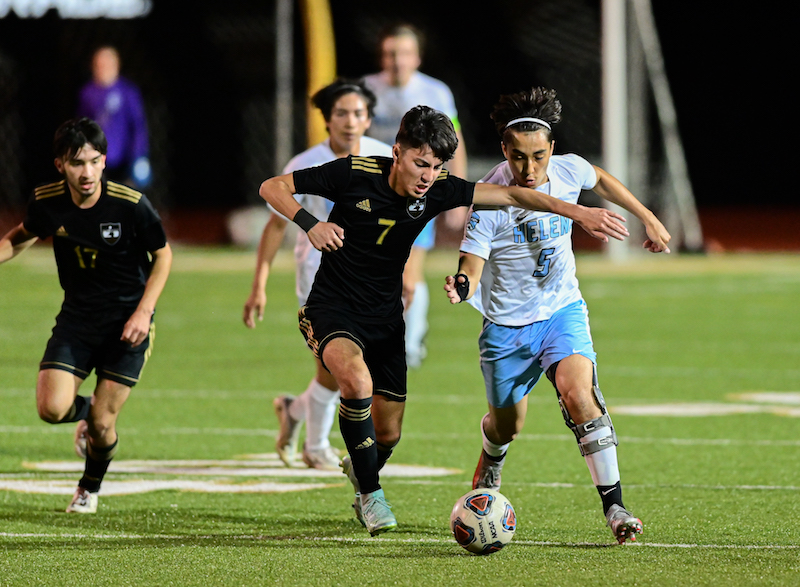 The top players from the 2022 soccer season earned a spot on this year's All-County boys soccer team. (File)

With three teams playing for state championships out of a possible four championship games and one winning a state title, the 2022 soccer season was business as usual for Shelby County teams.

Indian Springs took home the Class 4A-5A State Championship for the second year in a row, while Oak Mountain and Pelham finished runner-up in the 7A and 6A classifications, respectively.

Those three were just part of a special storyline for boys soccer teams this past year, as many spent the majority of the season in the top 10 or in contention for a playoff spot.

Now, the top players from another historic soccer season across the county are being honored on the 2022 edition of the All-County Team featuring a first and second team, as well as a talented group of honorable mention players.

Forward: Jackson Nabors, senior, Indian Springs. Nabors followed up his 52-goal, 23-assist Player of the Year performance in the county last year with an impressive county-leading 39 goals this season in addition to 14 assists. He finished his career with 105 goals and 48 assists, winning the 2021 Gatorade Player of the Year as well.

Forward: Nate Joiner, sophomore, Oak Mountain. Joiner was one of the county’s top offensive threats this season with 25 goals to lead Oak Mountain. He also posted four assists and was key in helping the Eagles return to the Class 7A State Championship game.

Forward: James Solorio, junior, Helena. A team captain for the Huskies, Solorio scored 21 goals and 10 assists, giving some of the best teams and defenses in the state problems to help Helena reach the quarterfinals of the playoffs once again.

Midfield: Nathan Tozzi, senior, Indian Springs. This year’s Player of the Year in the county, the Indian Springs offense flowed through Tozzi in the midfield most games. He finished second to Nabors by one goal in the county with 38 goals this season and led the county with 20 assists to help lead Springs to a second-consecutive title. He is now headed to join the Birmingham Legion before playing in college.

Midfield: Josh Owens, junior, Thompson. A member of this year’s All-State and All-Metro teams as voted on by the coaches, Owens was a leader for Thompson’s first playoff team since 2011.

Midfield: Matthias Leib, junior, Briarwood. In 17 games, this year, Leib totaled 17 goals and seven assists, scoring seven of those 17 goals against teams ranked inside the top 10 of the 6A classification to lead the Lions as a junior.

Midfield: Kevin Garcia, junior, Pelham. Garcia was the engine for Pelham’s offense this season, playing each midfield position throughout the season. He finished the year with 13 goals and six assists, but more importantly, he was the key offensive piece to helping the Panthers get to the state championship game.

Defender: Alejandro Hernandez, junior, Pelham. One of the top three players in the county this year regardless of position, Hernandez was strongly in the running for Player of the Year thanks to his defensive effort. He finished the season with seven goals and two assists offensively, but most important, he was the leader of a defense that posted 14 shutouts, including eight in a row, gave up one goal or less in all but three games and gave up two goals or less in all but one game.

Defender: Garret Murphy, junior, Oak Mountain. Someone who could be anywhere on the field at any time, Murphy not only scored six goals and one assist, but he was one of the strongest players at contesting opposing playmakers. His presence helped the Eagles post 14 shutouts this season and give up two goals or less in every game.

Defender: Gus Colvin, junior, Indian Springs. Easily one of the state’s best defenders, Colvin was the leader of a back line that posted 18 shutouts, gave up two goals or less in every game and one goal or less in all but five of the team’s 28 games. In addition to that, he totaled six goals and 13 assists.

Defender: Luke Miller, eighth grade, Chelsea. Still in middle school, Miller already holds a school record after totaling 62 interceptions for the Hornets this season. A defender and midfielder, he led the team in three different stats and set himself up for a bright future.

Goalkeeper: Sims Tosh, senior, Indian Springs. The top keeper in the county this season, Tosh put on a jaw-dropping performance in a 1-0 win against Russellville to clinch a second consecutive state championship and was big in a 3-2 penalty-kick victory the night before. He totaled 70 saves this season for an 82.4 save percentage, while he had 18 clean sheets and allowed just 15 total goals in 28 games.

Forward: Luke Richardson, senior, Westminster at Oak Mountain. Richardson finished second for the Knights this season with 24 goals, while he also added one assists after missing the first two weeks of the season.

Forward: Caleb Suarez, senior, Thompson. Another key piece for Thompson, Suarez helped propel the team’s offense as a leading forward during the 2022 season.

Forward: Cade Shannon, senior, Helena. With a relentless effort, Shannon was able to total 10 goals and 10 assists for Helena this season, helping lead the Huskies to another special season against a challenging schedule.

Midfield: Kaleb Bass, sophomore, Chelsea. The leader for Chelsea during the 2022 season, Bass scored nine goals and nine assists as an attacking midfielder and team captain.

Midfield: Geo Hernandez, junior, Montevallo. Hernandez was a key contributor and leader for the Bulldogs this season. As a junior, he scored 22 goals and pitched in 14 assists.

Midfield: Om Shrestha, sophomore, Oak Mountain. Shrestha quietly went about his business as one of the top midfielders in the county this season, holding together Oak mountain’s midfield. In addition to that, he scored three goals and had one assist as a young playmaker.

Defender: Corbitt Grundhoefer, senior, Oak Mountain. A senior leader that helped Oak Mountain get back into contention for a championship this season, Grundhoefer not only scored 11 goals and had three assists this year, but he swapped between forward and defender depending on the team’s need. He excelled in both for the Eagles.

Defender: Joshua Bramblett, junior, Indian Springs. Not only was Bramblett another key defender, taking on the best wing player most games, but he totaled 10 goals and 10 assists as an important contributor to this year’s state championship team.

Defender: Mark Valladares, senior, Pelham. Throughout the season, Valladares split between center back and right back, helping play a part in Pelham’s 14 shutouts this season as the second-best true defender on the team. He also scored four goals and had four assists.

Goalkeeper: KJ Godwin, senior, Pelham. A battle-tested keeper, Godwin was more than deserving of a spot this year on a team that relied on defense and keeping the other team from scoring. He broke Seth Torman’s goals against average this season en route to 14 clean sheets, only allowing 13 goals and winning twice in penalty kicks. In 28 games, he allowed one or less in all but three matchups.