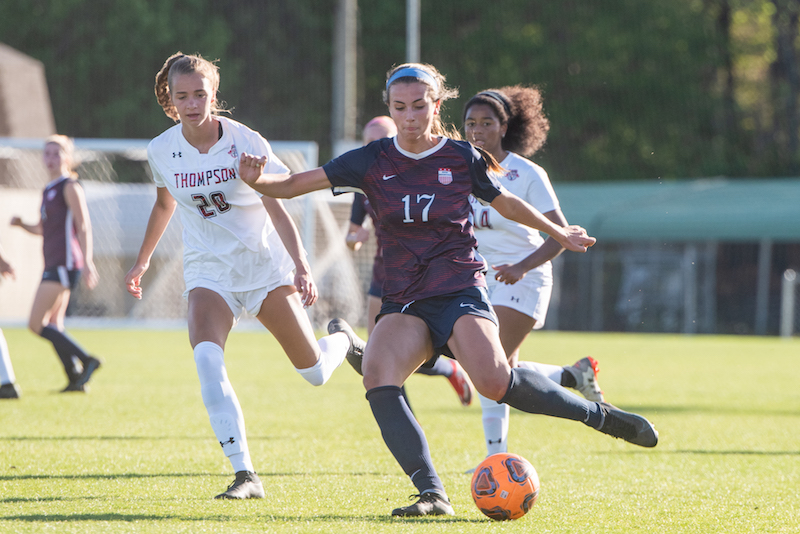 With two state champions, three Final Four teams and multiple playoff teams, the 2022 girls soccer season in Shelby County was another for the history books.

Spain Park and Indian Springs capped off dominant seasons as state champs, while Westminster at Oak Mountain made the Final Four and many others spent time in the top 10 of their respective classification.

Now, it’s time to reflect on the special season that was by honoring the top players from the season on this year’s All-County girls soccer team. The team featured a first and second team in addition to honorable mention players, all of whom helped create a county of competitive soccer teams.

Forward: Emily White, junior, Westminster at Oak Mountain. The third-best goal scorer in the county this season, White totaled 40 goals and had eight assists to help lead Westminster to the Final Four.

Forward: Bailee Washington, senior, Helena. It was another special season for Washington, who scored 31 goals and posted 18 assists for the Huskies this year. She finished her career with 79 goals and 62 assists in five years.

Forward: RK Hulsey, senior, Helena. Hulsey was the perfect complement to Washington thanks to a team-high 35 goals this season. She also finished the season with 10 assists and finished her five years with 88 goals and 30 assists.

Forward: Lane Hope, senior, Oak Mountain. With 20 goals and 17 assists, Hope was a key leader for Oak Mountain, who spent much of the year as the top-ranked team in Class 7A.

Midfield: Sydney Soehn, senior, Spain Park. With her senior leadership, Soehn was the glue to the midfield for Spain Park’s State Championship team in 2022. She finished the season with four goals and five assists and was a team captain.

Midfield: Kierson McDonald, junior, Oak Mountain. McDonald finished the season with 35 goals as the offensive leader for the Eagles this season. Not only that, but she finished the year with 23 assists.

Midfield: Norah Roller, junior, Indian Springs. Roller was hands down one of the top players in the state this season, finishing the year with a county-high 47 goals, while she added 12 assists. In the Final Four, she posted a hat trick in both the semifinals and state championship game to give Springs the state title.

Midfield: Tatum Ahlemeyer, sophomore, Spain Park. The clear offensive leader for Spain Park against one of the state’s toughest schedules, Ahlemeyer scored 28 goals and had eight assists. With that, she led the Jaguars to the title and was named the Class 7A State Tournament MVP as well as the All-Metro Player of the Year.

Midfield: Leila Mendonca, junior, Montevallo. The second-best goal scorer in Shelby County this year, Mendonca totaled 42 goals in just 18 games. In addition to that, she chipped in 17 assists as one of the county’s best players this season.

Defender: Maddie McNulty, senior, Spain Park. The leader of a defense that gave up more than two goals just once and held 13 of 22 opponents to one goal or less, McNulty was crucial in Spain Park’s run to the title. In addition to her defensive presence, McNulty added four assists and was a team captain.

Defender: Aubrey Gaut, senior, Oak Mountain. In 15 games, Gaut conceded no goals for the Oak Mountain Eagles. She was the team’s leader on defense, while she also scored seven goals and totaled three assists.

Defender: Olivia Honeycutt, senior, Indian Springs. The top defender for the Class 4A-5A State Champions, Honeycut was part of a defense that posted 12 shutouts this season and only gave up 24 goals.

Defender: Georgia Cousins, junior, Thompson. A leader for the Warriors all over the field, Cousins is a four-year starter at Thompson and finished her junior year with 10 goals and 14 assists in addition to her strong defensive play.

Goalkeeper: Kate Murray, junior, Oak Mountain. Murray was a winner this year in goal for the Eagles and only conceded five goals. She posted 17 clean sheets and was part of a strong Oak Mountain team that gave up one goal or less in all but two of 23 games and two goals or less in every game.

Forward: Jenny Grant, sophomore, Westminster at Oak Mountain. Grant finished second for the Knights but was one of the best when it came to scoring goals this season. She totaled 32 goals for Westminster, while she led the Final Four team with 14 assists.

Forward: Taylor Pilcher, senior, Pelham. Pilcher was a trustworthy and consistent player for the Panthers thanks to 13 goals and three assists during the 2022 season. In her career as a five-year starter, she scored 56 goals and had 25 assists.

Forward: Dia Montiel-Duenas, freshman, Thompson. A promising young player for Thompson, Montiel-Duenas led the Warriors with 19 goals this season and finished with 13 assists against a challenging schedule.

Forward: Emily Wester, eighth grade, Pelham. Another young talent, Wester led Pelham with 15 goals and six assists as an eighth grader. She had five game-winning goals this season as well.

Midfield: LC Smith, junior, Westminster at Oak Mountain. During her junior season, Smith was able to score 16 goals to finish third on the team and 13 assists to finish second on the team.

Midfield: Miah Rosener, sophomore, Helena. Rosener wasn’t to be forgotten about with two other elite talents on Helena’s team. She left her own mark by scoring 12 goals and finishing second on the team with 17 assists.

Midfield: Avery Burleson, senior, Chelsea. Against one of the state’s most difficult schedules, Burleson was able to score five goals and totaled five assists during her final year. She was the team’s captain and leader.

Midfield: Natalie Doerfler, junior, Calera. The Calera Eagles challenged Helena and Pelham closely for a playoff spot this year and Doerfler was a key reason why. She finished her junior season with 15 goals and six assists.

Midfield: Shadie Shrestha, senior, Indian Springs. A multi-purpose player, Shrestha was a strong defender in the midfield, but she also put together 10 goals and eight assists as a key senior leader on this year’s state-championship team.

Defender: Bradford Latta, junior, Briarwood. The team captain for the Lions, Latta went up against a schedule featuring several top-five teams and allowed just one goal, while she was part of a team that posted six shutouts.

Defender: Alyssa Wynn, senior, Pelham. Easily Pelham’s top defender this season, Wynn closed out a special career by helping the Panthers reach the playoffs yet again. In addition to her strong defensive play, she scored two goals and put together three assists.

Defender: Raylie Neeley, senior, Oak Mountain. In addition to Gaut, Neeley was another leader on the backline for the Eagles. She allowed one goal this season and was key in 15 shutouts.

Goalkeeper: Lillian Gourley, junior, Spain Park. Gourley isn’t just earning a spot on this year’s All-County team because of her presence all year, but also because of her dominance in the playoffs. She gave up just one combined goal in the postseason and was big in helping the Jaguars pick up wins of 2-1 and 4-0 in the Final Four. The Jags posted 10 shutouts this season and gave up one goal or less in all but six of 24 games.