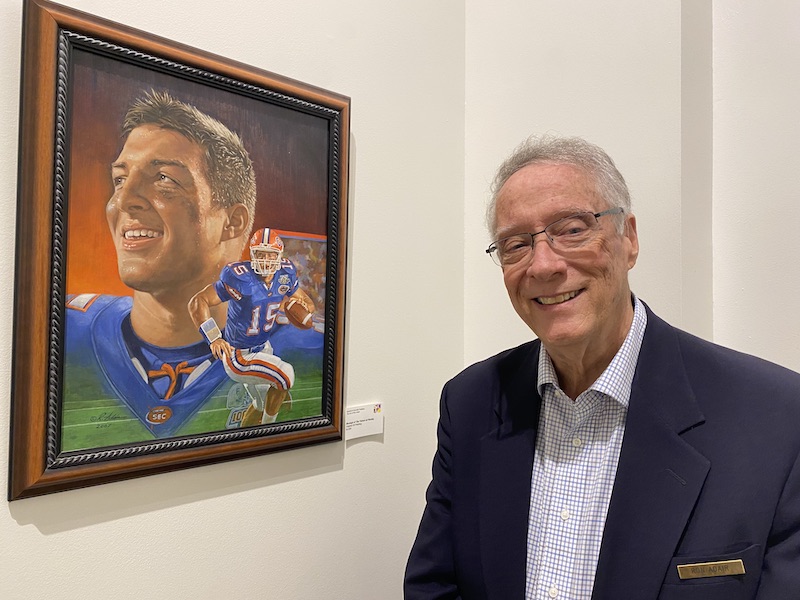 HELENA – Thursday, June 2 was a very special day for Helena’s Ron Adair. Adair’s vast collection of art work hung on the walls of the Shelby County Arts Council on display for the public to view.

Adair’s work consists of paintings and drawings of famous and beloved athletes and even a few celebrities such as actor John Wayne and American novelist Margaret Mitchell. His paintings range in medium, usually consisting of either oil, colored pencils or regular graphite pencils.

Each piece has an immense attention to detail. Adair perfectly captures, for example, the lines on Ronald Reagan’s face or the twinkle in Peyton Manning’s eyes. The drawings are so carefully crafted, one would assume at first glance that it’s a photograph and not a drawing.

He’s been an artist since he was five years old. He and his twin brother would paint and draw together and give each other feedback. By the time he got to high school, he knew being an artist was the path he was meant to be on.

He attended Washington University in St. Louis to hone his craft in their fine arts school. After graduating in 1970, he went to work for a publishing company where his illustrations were distributed across the United States in magazines and other media. After some time there, Adair moved on to freelancing, which is what he’s been doing ever since.

“I’ve had some marvelous projects I’ve been involved in,” he said. “Some are small and quaint, others are more high profile. I’ve done a few stamps for the government. My twin brother and I are the only brothers in the history of the United States to have both done U.S. stamp designs.”

His focus on sports has been a lifelong endeavor, but it wasn’t until 1982 when Upper Deck, a massive trading card company, came up with the idea to use illustrated images as opposed to photographs to make the cards stand out more that Adair found this could really be something. Upper Deck found five illustrators across the country, Adair and his brother included, to create these special cards. Adair said in a four or five year timespan, he created close to 150 illustrations of baseball, football and hockey players, most of which are in a binder at the Shelby County Arts Council.

“I’m just thrilled to be able to do something that I love, and I continue to try and grow as an artist,” Adair said. “I have never made a perfect piece of art work, but the challenge of doing excellent work is always there, and when you give it your best shot you can sit back and say, ‘I did my best.’”

At his show, Adair unveiled a painting he’s been working on for quite some time now: a portrait of the famous baseball player Hank Aaron. The portrait is up for auction, and members of the public are able to place their bids until July 2. Adair’s work will remain on display at the Council until Thursday, June 30.

To bid on Adair’s portrait of Hank Aaron, visit Shelbycountyartscouncil.com/product/exclusive-hank-aaron-commemorative-portrait/.