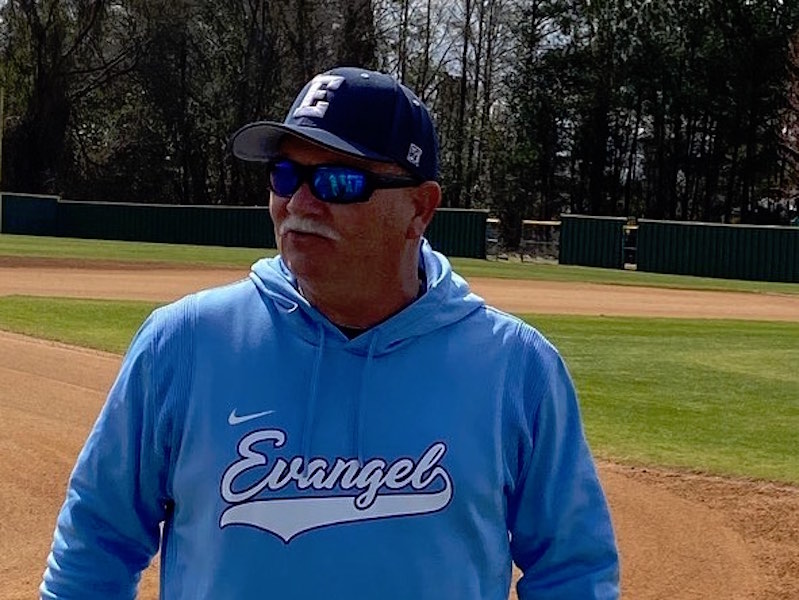 Sitting at a park watching little league baseball games, it hit him—he had been coaching for a long time.

In addition to that, however, one other thought quickly passed through the mind of Tim Smith, who has now been coaching baseball for 19 years between Cornerstone and Evangel Christian schools—the great kids he has been around.

As he looked around at the different coaches leading the little league teams, he realized six of them in the park that night were former players of his.

It’s those moments that make him appreciative of the years of coaching, which reached a milestone this year when Evangel won 11-0 against Wiregrass in the semifinals of the ACSC baseball tournament, giving Smith his 300th win as a head coach.

“I’ve been very blessed with some great baseball players,” he said. “That makes it a lot of fun. Anybody who knows me knows I love baseball. It has been a heck of a ride between the two schools I’ve been at. I’ts been a lot of fun.”

Of course, the Lightning went on to win the state championship a day later in an 11-1 victory against rival Ezekiel for win 301, but Smith remained adamant that the number of wins didn’t mean anything, it was all about the kids who have touched him.

“It’s nothing I’ve done,” he said. “God has blessed this old guy beyond belief with great kids, coaches and relationships. The camaraderie of the team is by far what I love the most about coaching the game. I still talk with quite a few of them. To me, that’s what it’s all about—the relationships that you build and what we try to pour into them while they’re with us.”

When Smith started coaching the baseball team at Cornerstone, he didn’t have a field and was worried about just winning a game.

That worry, however, started to dissipate over time, as he built the program into a state champion in 2012 before going to Evangel Christian School.

At Evangel, he has now won four ACSC State Championships after bringing home this year’s title.

“When I got here, they already had it,” Smith said. “I like to tell people, ‘I just haven’t messed it up so far.’”

He said the key to the success has not only been the great kids that have come through the programs but the stability and foundation of each with his assistant coaches being key along the way.

As the school’s football coach and the athletic director of a growing athletic department at ECS, Smith doesn’t have to coach the baseball team, but he has a passion for the sport that he can’t give up.

“They all know I love baseball. When I can’t hit infield and outfield anymore is when I quit, because they know how much I love that,” he said with a laugh. “I love seeing the kids grow. Even this year’s team, we started out slow, but to watch when they really clicked, that was fun. I knew with about three weeks left in the season, we were going to be tough to beat. They were battle tested.”

In addition to the players and coaches, Smith said there was one more person responsible for the team’s success every year—his wife Angie.

Now, Smith has a football season to prepare for, but he said he is already looking forward to getting back out on the diamond and competing to see what his 2023 team will be able to accomplish.