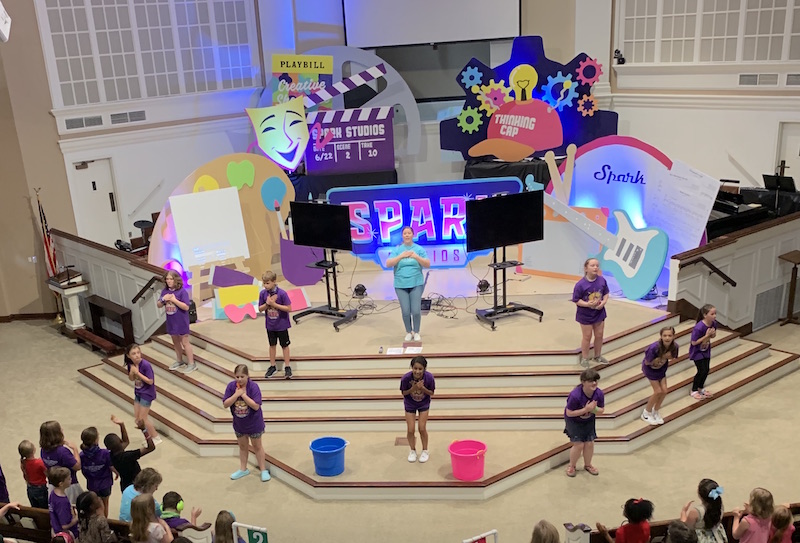 Students and teachers performed several songs each day during this year’s Vacation Bible School at First Baptist Church of Alabaster, which was held June 6-10. (For the Reporter/Emily Reed)

“We felt that we finally bounced back after COVID affected our VBS for the last two years,” said preschool and children’s minister Amber Bennefield. “The sanctuary was full of kids and volunteers, and it was a joy to see their smiling faces again. We also had 37 children make decisions to follow Jesus, and raised over $2,300 for our missions offering.”

This year’s theme was “Spark Studios,” which invited children ages K4 through sixth grade to spark their imagination and kick creativity into high gear.

They learned that God’s creativity didn’t stop in Genesis, and the “Master Artist” is working to redeem, reclaim and transform them.

Bennefield said Vacation Bible School is always a special time for children during the summer months because children thrive on relationships and connecting.

“I think this is a huge part of why they love VBS,” Bennefield said. “Our volunteers are excited to see them each day, know their names and continue to connect with them after VBS is over. It is so fun to look out and see grown-ups doing the motions in worship rally with their classes, not afraid of looking silly, just doing whatever it takes to connect with their class.”

He added that the goal for VBS at First Baptist Alabaster is to create a remarkable experience for the children who come.

“We want them to be wowed by the decorations, and have a blast making new friends, eating all the snacks, playing silly games at rec, and singing and dancing at worship rally,” Bennefield said. “Most importantly, we want them to leave knowing who Jesus is, how much He loves them and what He did for them on the cross.”

Roughly 150 volunteers worked throughout the week to make sure the event was a success. This included adults and students who devoted their time.

There were also individuals who couldn’t volunteer during the week of VBS who worked on things such as decorations, prep for registration and more the weeks leading up to the event.