Questions remain about plans for Chelsea schools ahead of special election 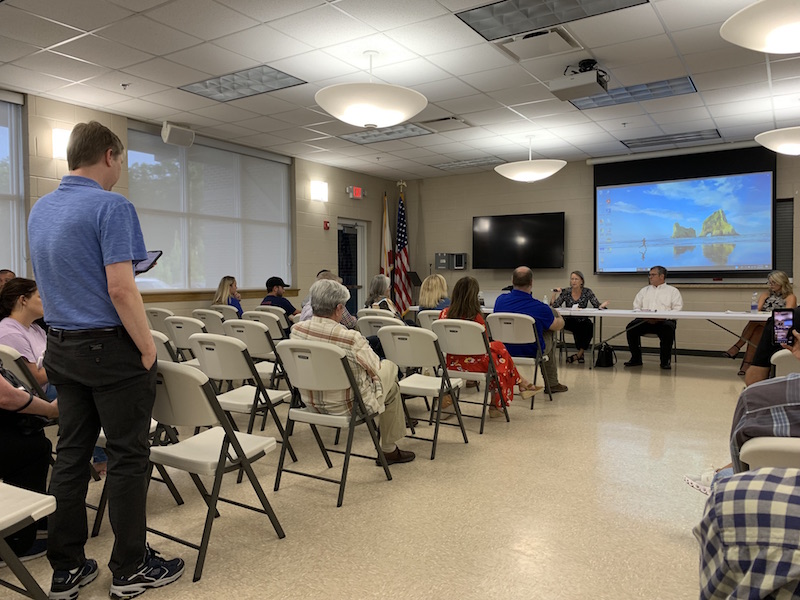 Residents share questions and comments about proposed plans for schools in Chelsea at a community forum on Thursday, June 9. (Reporter Photo/Emily Sparacino)

CHELSEA – As the date of Chelsea’s property tax vote draws closer, residents are still voicing their opinions about the possibility of the city separating from Shelby County Schools and forming an independent school system.

Dozens of people attended a community forum at the Chelsea Community Center on the night of Thursday, June 9 to ask questions, share opinions and hear from city leaders regarding the future of schools in Chelsea.

To start the forum, City Councilman Scott Weygand presented an overview of the plans if, in the special election July 12, the majority of Chelsea’s residents were to vote in favor of the city levying a 12.5-mill property tax to fund the formation of a city school system and facility improvements.

Weygand said the budget laid out in the study with 2019 revenue and expenses shows the city school system would be feasible.

“In the feasibility study, Criterion suggested 11 mills of property tax based on 2019 numbers,” Weygand said. “The July 12 vote is for 12.5 mills based on updated numbers from 2021. What that means to us is that millage can go further and can do more.”

Chelsea currently does not have a city property tax.

A home’s value is determined by the Shelby County Property Tax Commissioner’s Office, and in terms of millage, one mill is equal to one-tenth of one cent on a property’s assessed value.

Weygand said the institution of a 12.5-mill city property tax would fund the state-required one-month operating reserve of roughly $2.1 million in less than a year, and after that, the city would channel the funds into major construction projects and other education enhancements.

As a part of the proposal, non-Chelsea residents would be expected to pay an equivalent fee to the 12.5-mill tax, if it passes, to the Chelsea Board of Education if their students wanted to attend Chelsea schools.

“The opportunity is in front of us now. It’s about us as a community being able to rally behind our students to simply do better,” Councilwoman Tiffany Bittner said. “Shelby County Board of Education has said they do not have a plan to make improvements to our schools that are needed. The other side says there’s a better way. The truth is, there’s not another way right now. This is our one opportunity to have local control of funding through a separate Chelsea city school board that stands on its own.”

In April, Councilmen Cody Sumners and Casey Morris introduced an alternative proposal for the schools that does not involve an additional property tax and aims to allow the city to partner with the Shelby County Board of Education to address the immediate needs of the schools in Chelsea.

The proposal calls for the city to leverage the current 1-cent education sales tax in the bond market for improvements and renovations at the schools in the Chelsea city limits.

Under their plan, the schools would still belong to the Shelby County Board of Education, and they would still make regularly-scheduled upgrades; all additional funds from the city of Chelsea bonds would be used for additional upgrades and renovations to the current schools to address concerns and needs.

In addition, a citizen board would be established to work with local school administrators to determine needs and priorities for the schools, and then prioritize projects for the schools in Chelsea.

Like the members of the City Council, residents have remained divided on the school discussion.

Some of the questions and comments shared at the community forum related to:

• Whether school resource officers are included in the proposed budget for a Chelsea city school system.

• Whether paraprofessionals and crucial services for students with special needs would be prioritized in the proposed budget for a Chelsea city school system.

• Whether the student-teacher ratio would be lower if Chelsea forms its own school system.

• Whether teacher salaries would be higher under a city school system.

• Whether a Chelsea city school system would improve student outcomes and education.

• Why money generated by the 1-cent sales tax is not being used on immediate needs at the schools in Chelsea.

• Concerns about Chelsea continuing to meet the needs of its first responders and other city services if it forms a city school system.

Chelsea Mayor Tony Picklesimer said the proposed budget for a city school system does not depend on students outside of the Chelsea city limits paying tuition to attend schools in Chelsea.

“We are including the 1-cent sales tax in the revenue needed for the new school system in order to keep our millage low and create more surplus to do positive things with,” Picklesimer said. “That 1 cent would become committed to the city school system.”

Picklesimer said SROs will continue to be covered in the budget, and the payroll budget presented in the feasibility study allots more money for every employee at the start.

He said the city has about $3.6 million in the education fund and has been thinking about the possibility of forming a school system since early 2021.

McPherson said paraprofessionals are included as “instruction assistants” in the proposed budget, and that services for students with special needs are protected by law.

Regarding student-teacher ratios, McPherson said lowering the number for different grades would be Chelsea’s decision if the city moves forward with the school system.

Picklesimer said Chelsea will continue to fund city services with sales tax only.

Chelsea resident Amber Polk, who was elected to the Shelby County Board of Education in May, said the unmet needs at Chelsea schools were a big reason she ran for a seat on the board.

“It’s not the city’s responsibility to maintain the school buildings, and that is why I ran,” Polk said. “I saw the mess that we have going on right now. The disconnect is we were not being represented; a lot of this county has not been represented.”

Polk said she didn’t attend the forum to debate the issue, but to listen to what residents had to say.

“I’m truly just wanting to be here to hear both sides represented,” Polk said. “I want to know what all the parents feel. You’re validated in your concerns. You are absolutely right; the ball was dropped, and I feel like it is what precipitated all of this anger and all of this frustration.”

The special election regarding a property tax in Chelsea will be held Tuesday, July 12 from 7 a.m. to 7 p.m. at Chelsea City Hall.

For more information on the special election, visit Cityofchelsea.com and click on the “Special Election (July 12) Voting Information” box.