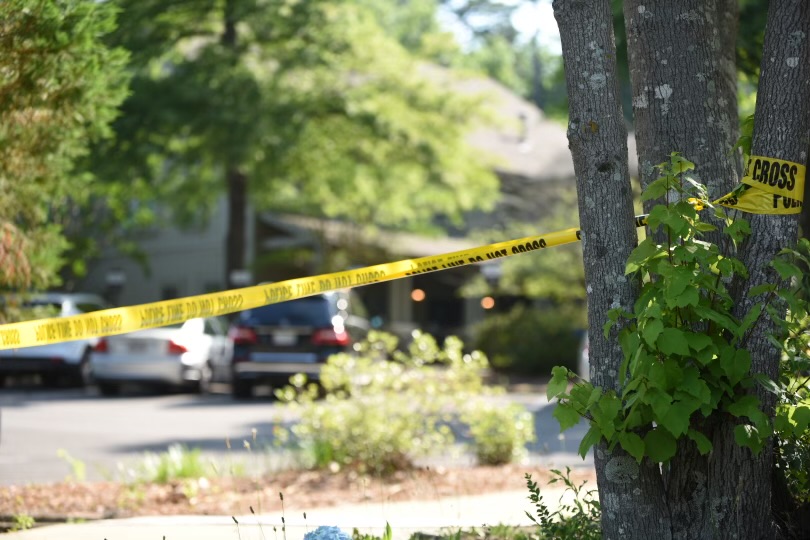 Local churches are coming together in prayer for Saint Stephen's following a shooting that killed two on Thursday night, while members of the church continue to ask for prayers this morning. (Reporter photo/Keith McCoy)

According to Vestavia Hills Police Department Capt. Shane Ware, a “lone suspect” entered the building and opened fire on the small gathering at the church, shooting three people in the process.

At 6:22 p.m., the Vestavia Hills Police and Fire departments were dispatched to the scene.

Originally, one person was confirmed dead following the shooting, while two others were taken to UAB Hospital in Birmingham. Later on Thursday night, Ware confirmed that a second person had died from their injuries, while one victim was still being treated for an unknown injury as of Friday morning, June 17.

“The Vestavia Hills Police Department would like to express our prayers for the families of the victims of this tragic event and for everyone in our community and greater community that is affected by this tragedy,” Ware said.

Names of the victims and suspect have not been released as of 8 a.m. on Friday morning.

“Dear friends, dear family, dear all the many people who love Saint Stephen’s and all those who are part of our much larger community, I’m reaching out with love and prayer to ask for your support tonight for the coming weeks, months and years,” said Rector Rev. John Burruss, who is currently trying to get back home from Athens, Greece as part of a church pilgrimage. “I’m deeply moved by the radical support of love from many people reaching out from all over the country, our clergy and first responders who are gathered with members at Saint Stephens. In the coming days and hours, we’ll have announcements about updates of ways to pray and gather. That’s what we do as people of faith, we come together in the midst of life and death.”

Burruss then turned to his book of common prayer as the emotions started to come through.

“When I don’t have words to say, I will often turn to one of my sources of comfort—my book of common prayer. I offer this prayer for those that we love,” Burruss said through tears. “Almighty God, we entrust all that are dear to us in your never-failing care and love for this life and the life to come, knowing that you are doing better things than we can desire or pray for, Jesus Christ, our Lord. I ask for your continued prayers and your support. Together we will hold each other in the tinder love in our savior Jesus Christ, Amen.”

On Friday morning, the church continued asking for prayers, as the tragedy has impacted the entire church family.

“As we begin this new day, we are waking up forever changed,” Saint Stephen’s shared on Facebook. “As I write this, two very beloved members of our Saint Stephen’s community have died in the most senseless and tragic circumstances, a shooting in our own church building. Another remains hospitalized. Still, others who were present are now carrying the invisible, lasting wounds of trauma. All who knew them and who are at all connected with our church are impacted in innumerable ways.”

Churches throughout Shelby County have also been sharing in prayer following the unthinkable.

“Dear friends, the unthinkable has happened in our own diocese and community,” shared The Episcopal Church of the Holy Spirit in Alabaster. “Please hold this parish and the people affected in your prayers.”

Asbury United Methodist Church, one of the largest in the county, shared their thoughts as well.

“In Romans, Paul encourages us to weep with those who weep,” the church said. “Tonight, Asbury weeps with our sisters and brothers at St. Stephen’s Episcopal Church in Vestavia. Be assured that in the days to come, you are loved and not alone.”

Saint Mark the Evangelist Catholic Church, which is located off of Alabama 119 in Shelby County near the U.S. 280 intersection, prayed for peace for all affected by the violence.

“With sadness and solidarity, we walk in love and prayer with our Christian brothers and sisters at St Stephen’s Episcopal Church,” Bishop Steven Raica said. “On behalf of all in the Catholic Diocese of Birmingham, I offer sincere condolences and closeness to the families of the deceased victims, prayers for the swift recovery of the injured as well as healing and peace for all affected by this act of violence. We pray that the angels and saints of God come to the aid of the deceased, to receive and present their souls to the mercy of God. May Christ grant these souls eternal rest and peace.”

“We gather now to offer prayer, as we do, to pray for those who have been injured, to pray for their families, their loved ones and for the community of Saint Stephen’s Episcopal Church,” Curry said.

The Episcopal Church in Alabama said the tragedy was senseless and one that will be hard to understand, but that they aren’t alone.

“Tonight, what felt impossible became a reality,” they shared. “We do not know and will never understand why this person chose this path.

We are grieving across the diocese and the state of Alabama. We know that we are not alone. This evening, we gathered as a community to pray. We have received calls and emails from across the country and around the world, and we are grateful for your love.”

On Friday morning, St. Luke’s Episcopal in Mountain Brook will hold a prayer service at 10 a.m.

As for the members of Saint Stephen’s, they’re asking for continued prayers during a difficult time.

A press conference with the Vestavia Hills Police Department is scheduled for 9:30 a.m. on Friday morning with the latest update on the tragedy.