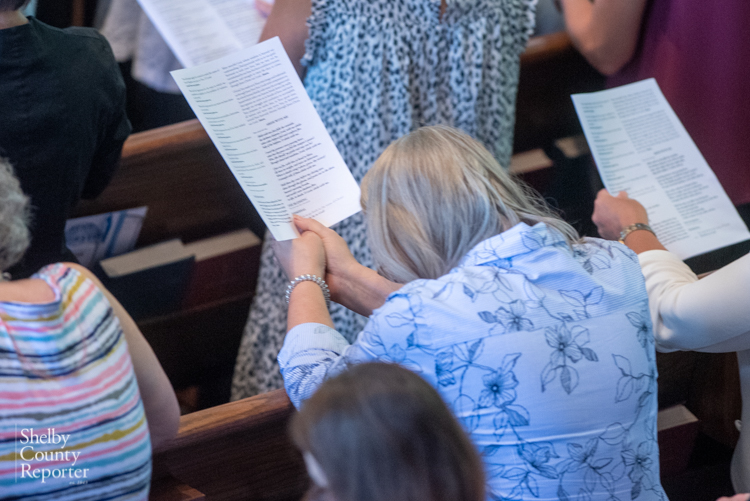 The Pelham community is grieving the loss of one of its residents, Sarah (Sharon) Yeager, in the June 16 shooting at Saint Stephen’s Episcopal Church in Vestavia Hills. (Reporter Photo/Keith McCoy)

PELHAM – The Pelham community is mourning the loss of one of its residents in a Vestavia Hills church shooting that claimed the lives of three people.

Sarah Yeager, 75, was identified as one of the victims in the shooting, which happened at Saint Stephen’s Episcopal Church shortly after 6 p.m. on Thursday, June 16.

“Like all of you, we are grieving alongside St. Stephen’s Episcopal Church in Cahaba Heights,” read a statement from the city of Pelham on Friday, June 17. “The crime that happened Thursday evening in that place of worship is unfathomable and senseless. One of the victims, Mrs. Sarah (Sharon) Yeager, was one of our own.”

Yeager was married to the late David Yeager, who was the son of Pelham’s first-ever mayor, Paul Yeager Sr.

“Her family’s roots run deep in Pelham,” the city’s statement read. “Please join us in praying for everyone impacted, especially the families of those who tragically lost their lives.”

The other two shooting victims were identified as Walter Rainey, 84, of Irondale, and an 84-year-old woman from Hoover whose name was not released per the family’s request for privacy.

As of about 1:20 p.m. Friday, June 17, authorities confirmed all three victims had died.

The shooting was reported shortly after 6 p.m. at the church, which is located in the Cahaba Heights community.

“The church was hosting a small group meeting, referred to as a Boomers Pot Luck dinner,” Vestavia Hills Police Department Capt. Shane Ware said. “Our investigation, while ongoing, has revealed that an occasional attendee of the church that I will only identify as a white male aged 71 was at the dinner. At some point he produced a concealed handgun and began shooting, striking the three victims.”

According to Ware, another person at the event subdued the suspect and held him down until law enforcement arrived.

The suspect will remain in custody at the Vestavia Hills Police Department while warrants for capital murder are issued by the Jefferson County District Attorney’s office.

A prayer vigil for all impacted by the tragedy was held at Saint Luke’s Episcopal Church in Mountain Brook on the morning of June 17.