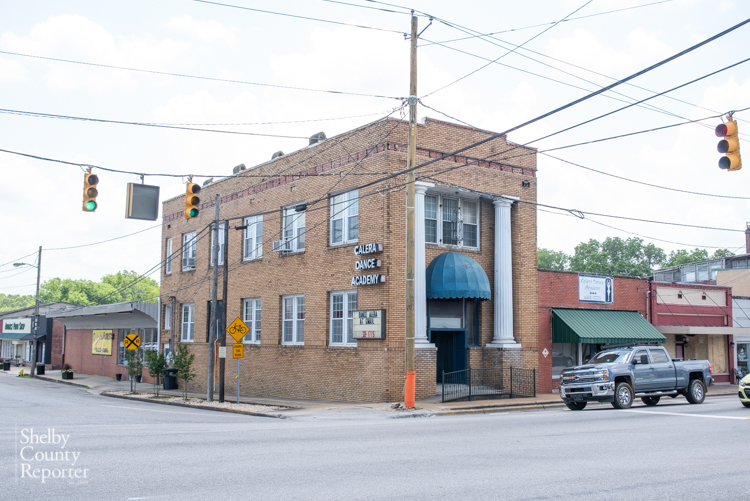 Central State Bank has bought two buildings on Main Street to help with their growth and the revitalization of the downtown area. (Reporter photo/Keith McCoy)

CALERA – When he walked into local business Linda’s Florist on his 25th work anniversary, Central State Bank CEO Mitt Schroeder didn’t know the dream that was about to unfold in front of him.

Looking for more space, he and a few colleagues went to the old Central State Bank building at the corner of Main Street and U.S. 31 with the hopes of expanding.

A dream of Schroeder’s for a while, they were buying the building, but during their visit, they realized more space was needed for their growing staff.

That led to a visit next door to Linda’s Florist.

“That day, we literally went in there with the intentions to determine if we wanted to buy the bank building,” Schroeder said. “In that same visit, we realized we needed more space.”

Knowing that, he knew there was a portion of the building that Linda’s Florist owner Linda Barrett wasn’t using.

“I walked into Linda’s building and asked if I could buy the portion of the building on the 31 side,” Schroeder said. “She said, ‘Yeah honey, you can, but would you have any interest in the entire building?’ I said, ‘Absolutely!’ That’s how that came about.

That day was ironically enough his 25th work anniversary with Central State Bank—a locally-owned bank that had been in his family since the 1940s.

And it just so happened everything came together on that day. Barrett was looking to retire and was able to sell her building to another locally-owned business, while the bank was also able to buy the building that housed Calera Dance Academy, who was looking to expand to a bigger facility.

Now, not only will the bank be able to house more of its employees in the city of Calera, but it allows a sentimental ownership of the old bank building and an opportunity for the company to give back to the city by helping with the revitalization of Main Street.

Schroeder’s grandfather started at the bank in 1945 and eventually took over controlling interest in 1947. At that time, there was $3 million in assets.

Now, according to Schroeder, there is more than $500 million.

“We hung around the $300-350 million range for a number of years, but the growth over the last two years has been pretty significant,” he said.

In need of the space, he not only was looking to purchase the old bank building at the corner of Main Street because of the amount of growth that took place there for close to 40 years, but because of the sentimental value to the family.

His mom, the late Deegee Schroeder, lived in the upstairs portion of the building for the first several years of her life, eventually working there in the family business.

That’s when her life of service began.

“My mom, when she was at the peak of her work life and peak of her contribution, the community was always so critical to her,” Mitt said. “She wanted us to always think about what to do to make the community stronger and the people around us stronger. This building, we want it to be an anchor if you will, of the new downtown revitalization for the community. A way to try and give back to the people who have meant so much to our family.”

The name of the new building will be the Deegee Schroeder building in honor of her dedication to the bank and the city of Calera.

“I always wanted that bank building because of that family history,” Mitt said. “We wanted to create our office space, yet create kind of a social area upstairs as well. It meant more knowing that our mom lived her first seven years of her life there. When you lose someone who has meant so much to you and so many people, you don’t want that spirit to die. You want to find a way to keep it alive, and doing this will help that.”

When Deegee passed away on Nov. 5, 2021, the community rallied around the family in support, almost as if their loved one had died.

“Over the last five years of my mom’s life, she didn’t have the energy to do that as much,” Mitt said. “But when she passed, it was incredible to see the impact she had on so many lives. They came to us and shared tears with their sadness. We really saw the impact on people we never knew she even knew that well. They were there for us like they had lost someone.”

Mitt said it is impossible for him and those at the bank to give back enough to the community for everything they have done for the family over the last 70-plus years, but this was a way for them to at least show that appreciation.

Not too long after, Calera Main Street started drawing up plans for an entertainment district in downtown Calera.

With a proposed revitalization of the Calera Courtyard to feature a possible green space, stage, playground, pavilion, splash pad and more, the bank wanted to be a part of that transition.

“We were so encouraged to see our city leaders invest in the downtown revitalization, we felt the least we could do is our part,” Mitt said.

The plans are to keep the charm of the old Main Street buildings in their refurbishments, while completely renovating the inside with new plumbing, electrical and equipment for a modern workspace with an old-school feel.

They also plan to completely renovate the upstairs portion of the old bank building, where his mom used to live as a kid, and make it a social gathering area that will overlook the proposed new entertainment district in the courtyard.

“We want the community to be very proud of this,” he said. “When they built that building in 1920, everybody in Calera was proud of that thing. We want to bring that pride back to it. We appreciate so much that this community has done for us that we want people to share in it to feel like it’s a part of them as well.”

The goal is to start the project in August or September of this year and for it to take 12-18 months to complete.

“We’re really going to try and do our best to save and make all the old look really good, while incorporating the ability to function it and be used into today’s environment,” Mitt said.

He added that with the growth of the city, this is a chance to add to the hometown feel of Calera.

“Even though we have all of these new people, it’s like they’re making that core bigger,” he said. “It’s a good thing, and we want to never allow that to die. We never want to be a community that just doesn’t have the pride that we all have right now and have had for, gosh, my whole lifetime.”