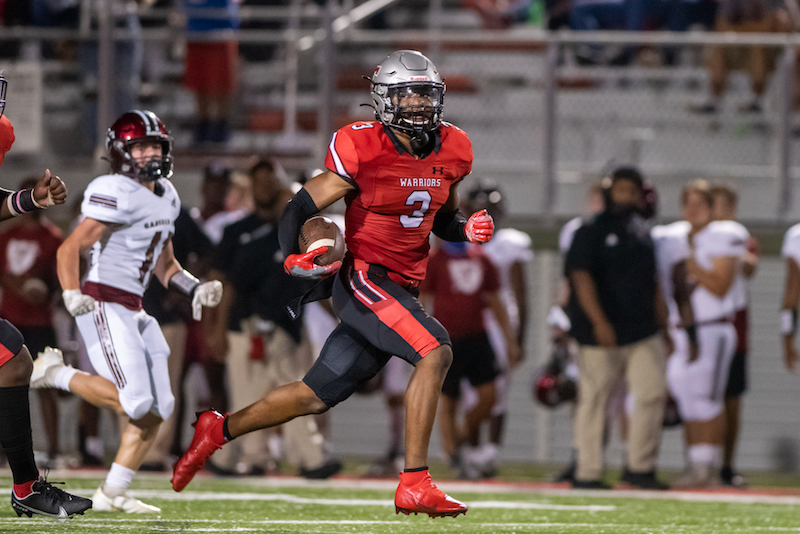 The 2021-2022 school year went by in a flash, and while the next year is on the near horizon, we can’t fully shift focus until the top athletes from this past sports-calendar year are honored.

A year that featured several team and individual state champions, many of the state’s top athletes and even some of the best in the country, it was another historic season.

Now, the best of the best from the year are honored on this year’s All-Sports Team, which features an elite group of the county’s 20 best athletes from the 2021-2022 season on a first and second team. 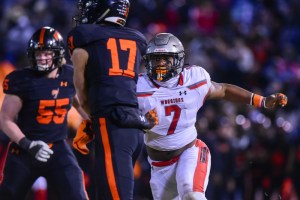 Jeremiah Alexander, football, Thompson. One of the best football players in the country this past season, Alexander closed out a special career with 54 solo tackles, 29 assisted tackles, 28 tackles for loss and more than 20 sacks before enrolling at the University of Alabama in January. 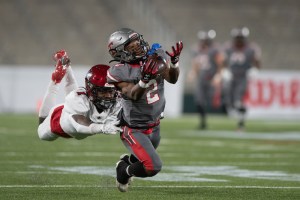 Ryan Peppins, football, Thompson. The state’s Mr. Football winner, Peppins led the county and state with 1,564 receiving yards and 23 touchdowns on 80 receptions this past season, including 204 yards in the state championship game to earn the MVP of Thompson’s third title in a row. 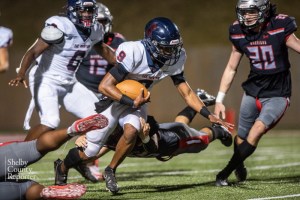 Evan Smith, two-sport star, Oak Mountain. The Player of the Year in Shelby County for football, Smith totaled 1,110 rushing yards and 1,184 passing yards with a combined 28 touchdowns, while he also played on defense at times. Smith also started for the basketball team and battled through injuries to help play a part in getting the Eagles back to the Elite Eight. 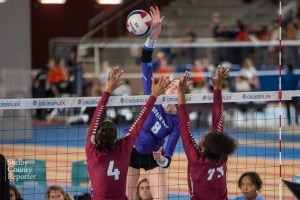 Audrey Rothman, volleyball, Spain Park. Not only was Rothman the top player in Shelby County during her senior season, but she was the state’s best volleyball player and one of the best in the country. She totaled 709 kills, 249 digs, 71 blocks and 35 assists to help the Jags win their first state championship in school history. 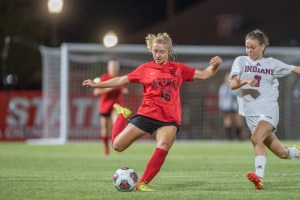 Norah Roller, soccer, Indian Springs. Many coaches commented on how stellar of a player Roller was this season. She led Indian Springs to their first 4A-5A State Championship thanks to 47 goals and 12 assists, including hat tricks in both the semifinals and state championship. 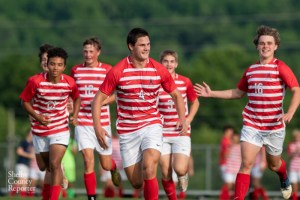 Garrett Murphy, two-sport star, Oak Mountain. Murphy found himself on two All-County teams this season, earning first-team nods for both football and soccer. In football, he totaled 80 solo tackles and 39 assisted tackles, while he posted 16 tackles for loss, two sacks and two interceptions. He was also key in helping lead the soccer team to the state championship game as part of a defense that posted 14 shutouts and gave up one goal or less in all but three games, while he scored six goals. 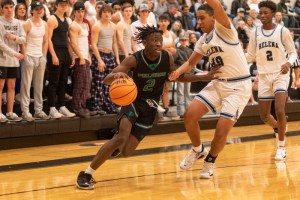 Michael Jones, basketball, Pelham. The county’s top boys basketball player, Jones led the county in scoring this past season with 23.7 points per game. He also finished with an average of 3.9 rebounds and 3.8 assists per game and was one of the county’s top-two scorers in each of his final three years. 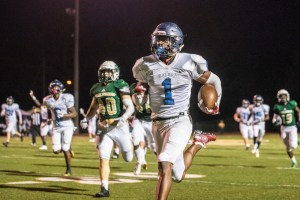 Kobe Prentice, football, Calera. With a first-year quarterback taking snaps, Prentice didn’t just step up, he put together one of the state’s best seasons at receiver. He totaled 1,231 yards and 18 touchdowns on 69 receptions to finish just behind Peppins. All it took was seeing him showcase his speed and shiftiness in person to realize he was one of the state’s best athletes this past season. 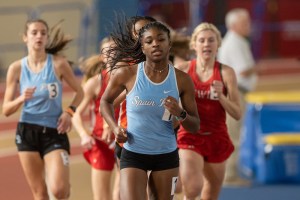 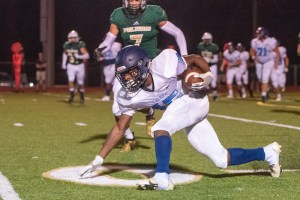 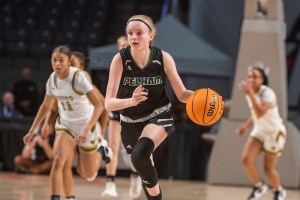 Laci Gogan, basketball, Pelham. For the second year in a row, Gogan was named the county’s girls basketball player of the year. She averaged 16 points, 2.5 rebounds and 2.4 assists per game, while she posted 58 steals and 23 blocks to lead the Panthers to their first-ever Final Four. 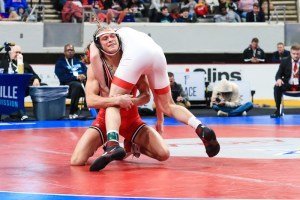 James Latona, wrestling, Thompson. During his final season with the Warriors, Latona not only added his third-consecutive state championship to help Thompson reclaim the team title, but he also picked up an NHSCA National Championship. 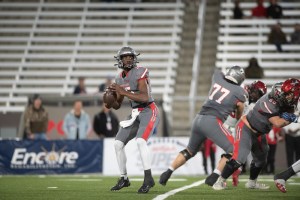 Conner Harrell, football, Thompson. Harrell was big for the Thompson Warriors during his senior season, fighting through an injury to his throwing hand late in the season and another in the state championship game to still lead the Warriors to their third title in a row. Despite the injuries, he still racked up 3,126 passing yards, 405 rushing yards and a combined 52 touchdowns, 47 of which came through the air. 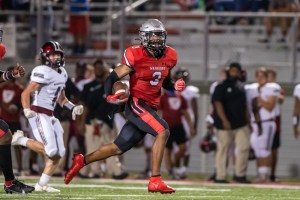 Tony Mitchell, football, Thompson. Defenses stayed as far away from Mitchell as they could this past season, yet he still totaled eight pass breakups, two interceptions, 28 solo tackles, 18 assisted tackles and four tackles for loss. His athleticism gives him the ability to play all over the field defensively, and he is one of the country’s most sought-after recruits ahead of the 2022 football season. 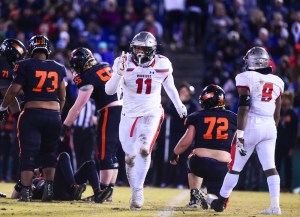 Peter Woods, football, Thompson. Right alongside Mitchell is Woods, who totaled 51 solo tackles, 41 assisted tackles, 28.5 tackles for loss and more than 20 sacks during his junior season. He is also one of the top national recruits ahead of the 2022 season as a defensive lineman. 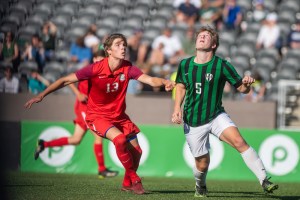 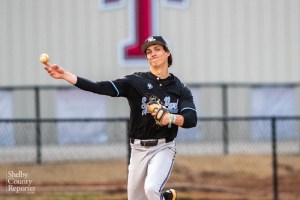 Cole Edwards, baseball, Spain Park. Against one of the state’s toughest schedules, Edwards put together a batting average of .421 during his junior season. The Auburn baseball commit totaled 45 hits, 32 RBIs, 29 runs scored and 21 stolen bases for the Jaguars. 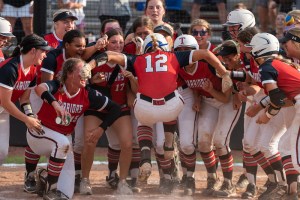 Dailynn Motes, softball, Thompson. Motes was crucial this season in helping Thompson win its third softball state championship in school history. She led the county with 72 hits out of the leadoff spot and had the sixth-best batting average at .503 against some of the state’s stiffest competition. In addition to that, she led the county in runs scored with 55 and stolen bases with 35, while she totaled 28 RBIs, 12 doubles, five triples and two home runs. 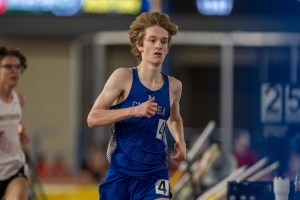 Miles Brush, runner, Chelsea. During his senior year, Brush won the Class 6A cross country state title, while he finished on the podium in two different track and field events, fourth in another and eighth in another. 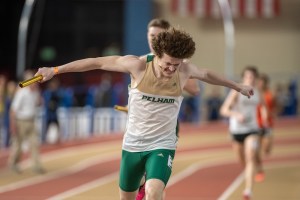 Avery Childress, two-sport star, Pelham. A lead defender for Pelham’s basketball team, Childress not only helped lead the Panthers to the Sweet 16, but he was a force in track and field as well. He finished second in the 400-meter dash at both the indoor and outdoor state championship and was a leader in the team’s 4X400-meter relay team that won a state championship.