HOOVER – Local author Phil Fishman has written and self-published multiple books over the years, but the longtime Shelby County resident claims the most recent book is his most important work to date.

Fishman’s historic fiction novel “The Game” involves a flashback to Nov. 9, 1938 in Nazi Germany, known as Kristallnacht, or the Night of Broken Glass, a violent night that some consider the beginning of the Holocaust. 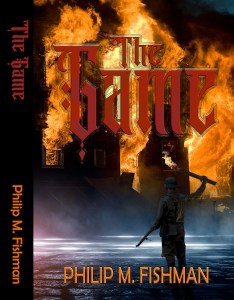 Shelby County resident Phil Fishman’s latest book, “The Game,” is a work of historic fiction that involves a flashback to the violent night in Germany in 1938 known as Kristallnacht. (Contributed)

Fishman, 83, weaves pieces of history with a fictional story about a young man who comes to New York from his home in Boston in 1960 and crosses paths with a woman who thinks she might be his mother.

“The whole point of this book is to try to keep the memory alive of the Holocaust,” Fishman said. “It’s a bit of a mystery novel as well as a historic novel because there are little pieces of evidence that are thrown in.”

Fishman wanted to write the novel to reinforce that the Holocaust took place, a reality some people deny, he said.

“That really upsets me,” Fishman said. “This is just one of a lot of books to try to let folks know that, no, it was not a hoax. It happened. There were 6 million Jews that were murdered.”

Fishman’s Jewish heritage also prompted him to pen the novel. All four of his grandparents came from countries in Europe, including Ukraine, Belarus and Poland.

Fishman is holding a book signing for “The Game” at The Crossings at Riverchase on Saturday, June 25 from 2-4 p.m.

The event will include readings and refreshments.

“The Game” is available on Amazon at Amazon.com/dp/B0B1RY1Y6Z.

Fishman’s other book titles include “Teacher’s Gotta Dance,” “Secession: A Republic Reborn,” “Step Into The Fifth Dimension,” “A Really Inconvenient Truth: The Case Against the Theory of Anthropogenic Global Warming” and “Aren’t the Emperor’s New Clothes Grand.”