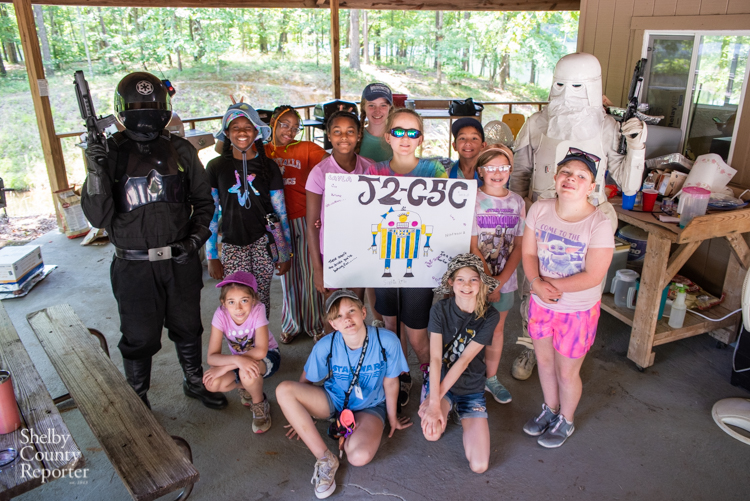 The Kanawahala Program Center in Chelsea served as the campsite for a week-long space-themed summer camp for Girl Scouts from Shelby and Chilton County. (Reporter Photo/Keith McCoy)

CHELSEA – Throughout the week of June 13-17, several Shelby and Chilton County girls participated in a fun-filled Star Wars and space themed summer camp at the Kanawahala Program Center in Chelsea.

The summer camp is an annual event that has a different theme each year. The camp was primarily for Girl Scouts, though non-scouts were also able to participate. The Girl Scouts service unit consists of Shelby County girls from Pelham, Helena, Alabaster and Calera.

Throughout the week, the girls took part in fun outdoor activities such as hiking, swimming, archery and canoeing in addition to fun space-themed crafts, all planned by troop leaders and volunteers.

April Griffin, the service unit 280 manager, said they chose Star Wars and space to give the girls a hands-on learning experience.

This year, there were roughly 40 children who participated in the camp. The camp’s units were divided up into age brackets: the Daisies were kindergarten through first grade, the Brownies were second through third grade, Juniors were fourth and fifth grade, and then Cadets, which are program aids in sixth through eighth grade who assisted the unit leaders and motivated the girls.

In addition to learning about space, the girls were also given the opportunity to learn about other scout activities such as outdoor cooking. The girls were taught to cook using a box oven, a solar oven, a Yeti cup and also a Dutch oven.

On Thursday, they had a Star Wars day where the center’s outside area was decorated like Dex’s Diner from Star Wars with cantina music playing and a special visit from Star Wars characters. On Friday, the different units presented skits to their parents with help from the program aids.

Griffin said programs like the Girl Scouts and these summer camps are vital in building young girls’ self-esteem and introducing them to new things.

“It helps to develop the kids’ mindset and helps keep them out of trouble,” Griffin said. “It also helps them develop their own sense of what they want to be as an adult and as a leader. It helps their self-esteem because they are exposed to things they would not normally get to see and shows them what they’re capable of.”