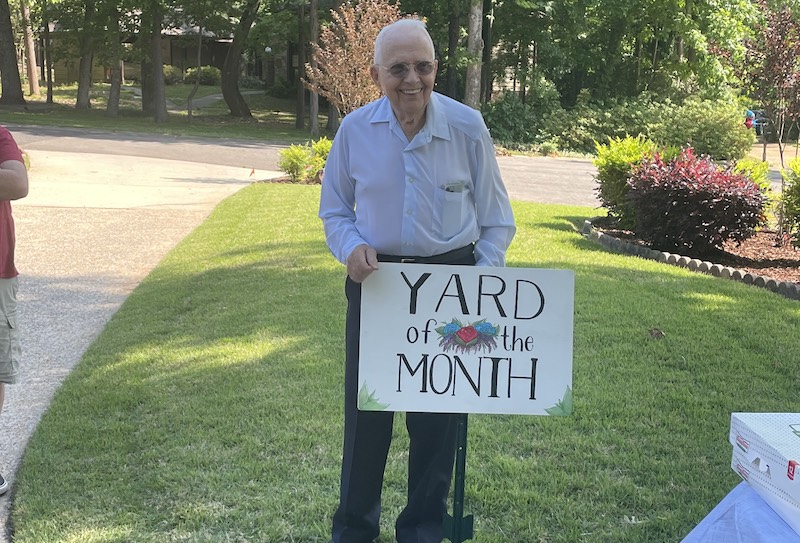 Edward Curtis Brasher was awarded the Yard of the Month award by his neighbors, Mayor Gary Waters and City Council President Maurice Mercer for his 90th birthday in early May. (Contributed/June Fletcher)

PELHAM – Members of a small Pelham neighborhood decided to honor a member of their community with a special recognition on his 90th birthday. In early May, members of the Chandalar neighborhood honored Mr. Edward Curtis Brasher with a Yard of the Month award to thank him for his commitment to his lawn and keeping the neighborhood beautiful.

“He is a real character,” June Fletcher, Brasher’s neighbor, said laughing. “He comes across to some people as rough around the edges, but he’s got a heart of gold and he just pours everything into that yard.”

Fletcher said she and her other neighbors admire Brasher a great deal and honoring him with the award was something they thoroughly enjoyed being part of.

“We’re really close knit in this community here,” she said.

Brasher has lived in the neighborhood for more than 30 years and was one of the first to live in the cul-de-sac. He had retired from the military where he served as a Lt Colonel of the Air Force. After finding Chandalar, Brasher decided he wanted to make this his permanent home. His neighbors say he is out in his yard every day to make sure everything looks as it should and that nothing is out of place.

According to Fletcher, Brasher had his children plan the 90th birthday party according to his instructions. When his oldest son reached out to Fletcher and her husband for help, they were happy to oblige.

Brasher was given the award by the city many times in his years living in Chandalar, but the award was discontinued a long time ago. So, Brasher’s neighbors had to do some work to get the award. They went to Mayor Gary Waters and to City Council President Maurice Mercer to make the award a reality.

Standing on his lawn with a large smile on his face, Brasher was presented the award by his neighbors and special guests Waters and Mercer.

“We don’t have any people like him who are getting out there every single day to work in their yard to make it a beautiful place,” Fletcher said. “That’s what we were celebrating: him being out there and making it what it is and showing people what they can do with their own yards.”