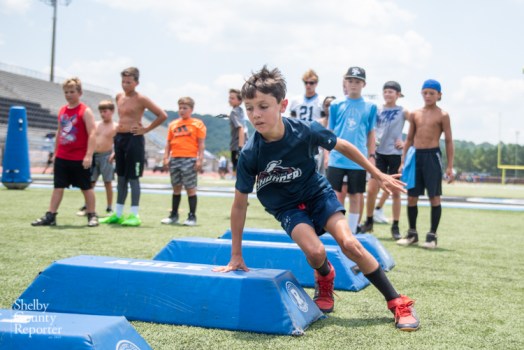 Tim Vakakes put on his first youth camp as the Spain Park head football coach, placing an emphasis on growing the community support for the program. (Reporter photo/Keith McCoy) 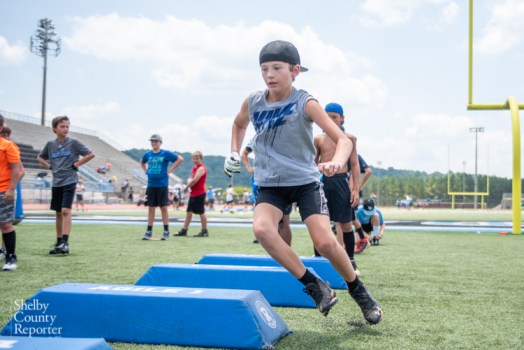 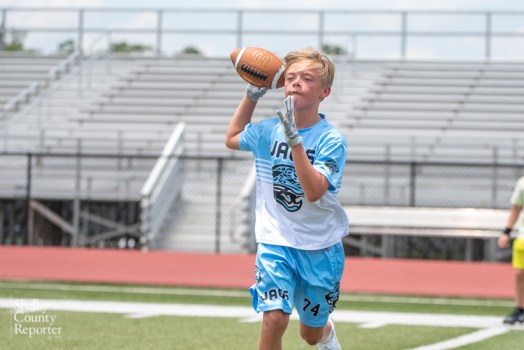 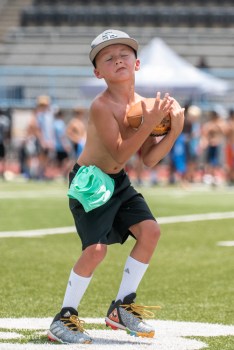 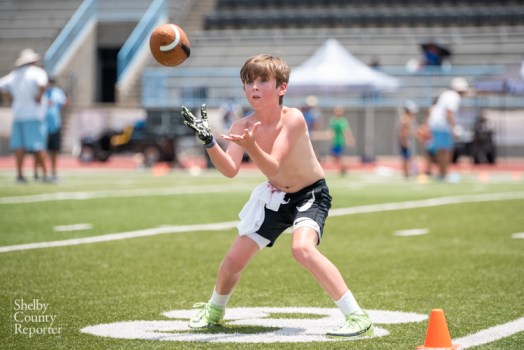 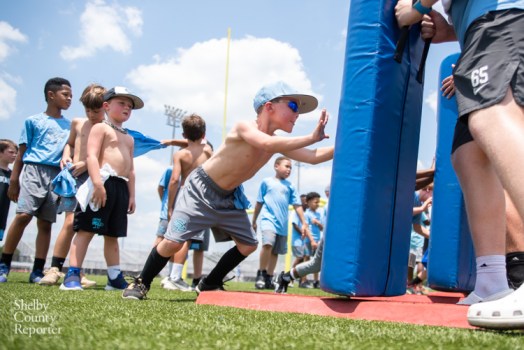 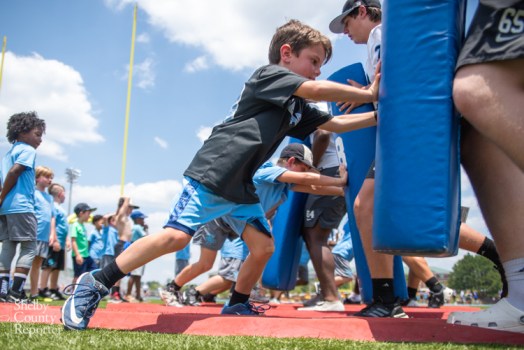 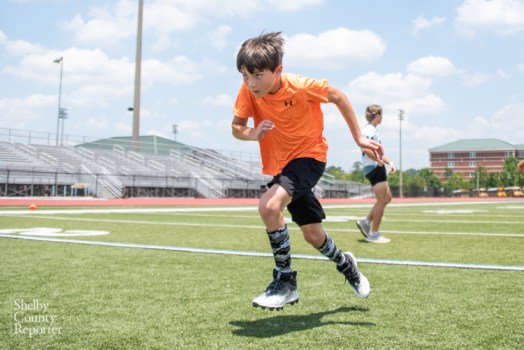 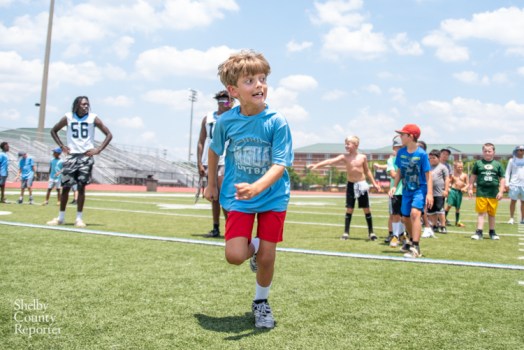 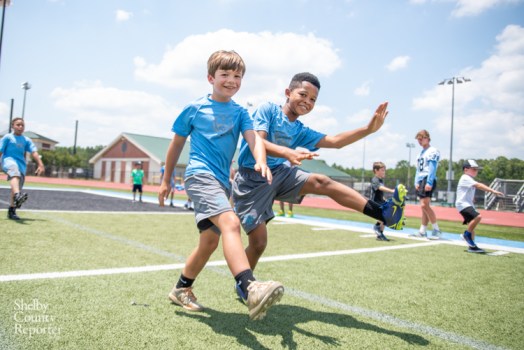 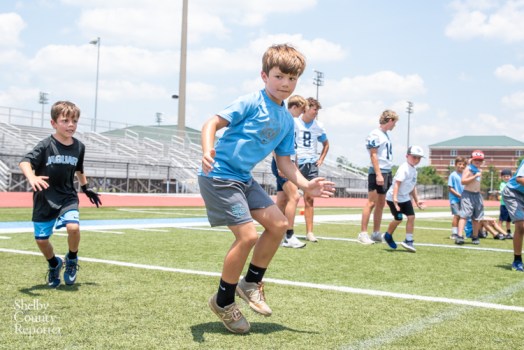 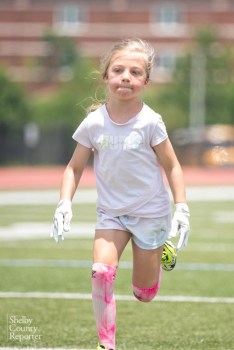 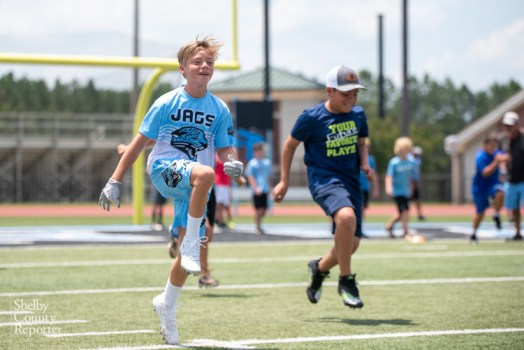 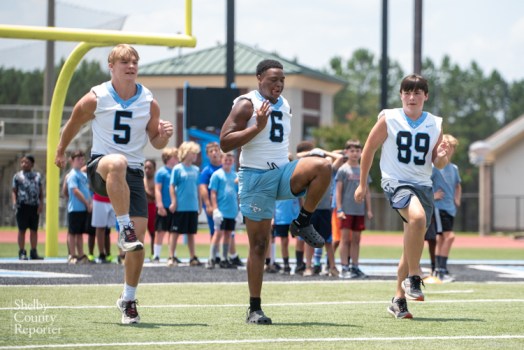 HOOVER – Sitting in his office with his computer open to Twitter and his phone open to Facebook, Spain Park head coach Tim Vakakes becomes silent with an intense look of focus.

“Hold on,” he said. “We just got our photos from camp and I’m going to send them out real quick.”

That was the first time in a five-minute span that he had to take a second to share a social media post.

It’s a part of the excitement he is trying to build around the Spain Park football program heading into his first season as the team’s head football coach after spending the last nine years leading Jackson-Olin.

“Last year, there was a couple of grades that didn’t have enough kids, now, they’re overflowing with kids,” he said. “It’s pretty cool. We have a bunch of kids coming up.”

That’s a point of emphasis for Vakakes right now. He said getting the younger kids and the community involved in what is happening with the football program at every level is the foundation to building a successful program.

So, during this year’s youth football camp June 20-21 at Spain Park High School, Vakakes fully capitalized on the opportunity to build excitement.

The camp not only featured two days of drills and learning the game, but two days of fun from the campers, coaches and players in attendance.

There was even a punt, pass and kick competition that saw the attendees compete in different facets of the game to showcase what they learned. At the end, six different campers received certificates for their effort and got a picture with the head coach himself, which was, of course, put out in a recap of the event on social media.

“That’s the future of the program,” he said. “At JO, we had a camp every year and it was just a lot of fun getting the kids out there. It’s important for the kids, the little ones, to get out there and enjoy it and kind of let it be their home.”

Vakakes said the camp helps the kids find a love for the game, and even used one of his current players as an example.

The player, who will be a junior this year, told Vakakes that he remembered coming to the camp as a kid. He told his coach that the camp really helped him realize he wanted to play tackle football.

“That’s the goal,” Vakakes said. “They’re not learning a lot of offense or defense, that’s not what it’s about. It’s all about them having fun and finding a love for the game in their community.”

In addition to the young campers in attendance, Vakakes said the camp almost had more of an impact on his players that it did the kids, which is something he was excited to see as their new leader.

The impact on the younger kids in the community and his own players is just part of an initiative to take Spain Park football to the top in one of the most difficult regions in the country, and Vakakes knows the amount of work that will take from himself, the school’s administration, the players and those who live in the community.

The word community was one he used a lot, and it’s something he focused on from day one, getting out and meeting people from different neighborhoods.

“It’s important to get the whole community to where they are excited about it,” Vakakes said. “I wanted to come to them. We had a little meet and greet here with them, but I said, “I want to get out in the community, I want to get out.’ So our booster club guys got it set up to where we went out to Greystone, Riverchase, you know, just try to get out and see as many of the communities as we could.”

With two months until the season kicks off, he’s glad to see the support surrounding him, joking that everybody loves him now because he hasn’t lost a game yet.

Spain Park will kick off the season on Friday, Aug. 19 with an in-county battle against Calera.