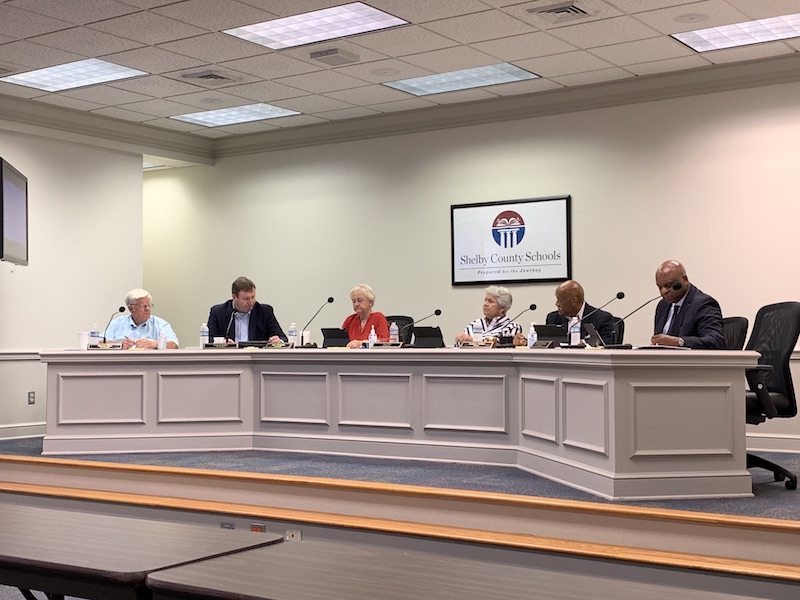 On Thursday, June 23, the Shelby County Board of Education approved a declaration of emergency for repairs needed in Chelsea High School’s football stadium press box, along with a $7.7 million bid for classroom additions and roof repairs at Calera High School. (Reporter Photo/Emily Sparacino)

COLUMBIANA – The Shelby County Board of Education approved a declaration of emergency for Chelsea High School’s football stadium press box at a meeting on Thursday, June 23 at the Central Office.

The emergency declaration lists the findings of a structural assessment of the press box that revealed extensive water damage and rot.

“There are some structural safety concerns that require immediate attention,” Assistant Superintendent of Operations David Calhoun said. “The emergency declaration will allow us to move quickly to address these concerns.”

According to the declaration, the Chelsea Quarterback Club president notified the construction maintenance supervisor from the Shelby County School System’s Facilities and Maintenance Department earlier this month of a significant concern regarding the floor of the press box.

“According to subsequent findings by the construction supervisor of water damage across much of the rear wall, and upon further examination of the press box, it was apparent that some structural damage existed,” the declaration read. “A 15-foot section of water damaged wall was removed to expose existing wall studs, wood floor joists and plywood floor sheathing, and during the past week, an architect, a contractor and a structural engineer engaged by the Board of Education have completed a structural assessment of the press box.”

Finishes will be removed from all of the rear walls and portions of the side walls to observe the wall studs and top and bottom plates; in addition, floor joists will have bottom finishes and insulation removed for review of structural damage.

“This further assessment and review will provide the direction needed to repair the damages to the facility so that it will be safely operational as soon as possible and not adversely impact the health, safety and welfare of those using the facilities during the upcoming school year,” the declaration read. “There are serious concerns about securing the necessary materials to make these repairs in a timely manner and, therefore, there is a need to take action as quickly as possible in responding to this emergency.”

Calhoun said although the full scope of repairs is unknown pending the completion of the structural assessment, the district’s intent is to have the press box repaired and ready for use when the upcoming football season begins.

In other business, the board approved a bid from Kyser Construction for a classroom addition project at Calera High School.

At a previous meeting in May, the board had approved a recommendation to reject the sole bid received for the project because the nearly $7.9 million bid exceeded the district’s budget for the project.

“Once again, we had just one contractor that submitted a price, but thankfully this second time around, the price that came in is much more appealing to us,” Calhoun said. “We have money in our budget to address these two most immediate needs at Calera High School.”