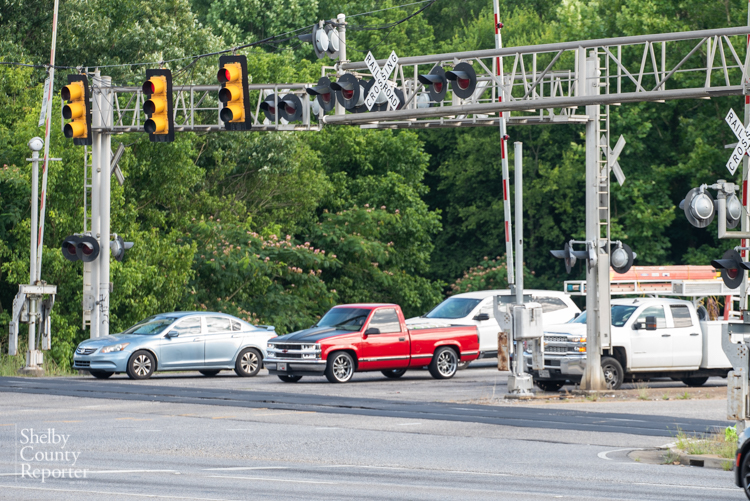 Crews with CSX have completed repairs at a railroad crossing at the intersection of Alabama 119 and U.S. 31 in Alabaster. (Reporter Photo/Keith McCoy)

Repairs were completed Wednesday, June 22 by CSX at the rail crossing intersection of Alabama 119 and U.S. 31.

The highly traveled intersection was closed for much of the day as crews with CSX worked to repair much-needed issues at the crossing.

“The last patch CSX performed on the crossing in December 2021 was in poor condition and didn’t align with the road surface,” said city Public Information Officer Neal Wagner. “This patch will help to remedy that, and should lead to a much smoother experience when crossing this high-traffic intersection.”

The work was projected to take about eight hours for the repairs, and vehicles were detoured from the area while the work was being completed.

Drivers were encouraged to use Second Place Northwest/First Street near the Alabaster Police Department or Fulton Springs Road to access Alabama 119 while the crossing was closed.

City officials received word from CSX that the work would begin on the roadway last week. Initially, the work was projected to begin on Tuesday, June 21, but was postponed until the next day.

The intersection of Alabama 119 and U.S. 31 is considered one of the busiest parts of the city, with more than half of the residents in the city driving over the crossing each day.

Wagner said city officials began contacting CSX and ALDOT shortly after it became clear the previous repair work didn’t fix the rough crossing, since the crossing is on a state highway and in CSX right-of-way.

“We appreciate both agencies for responding to our calls for action on this crossing,” Wagner said.