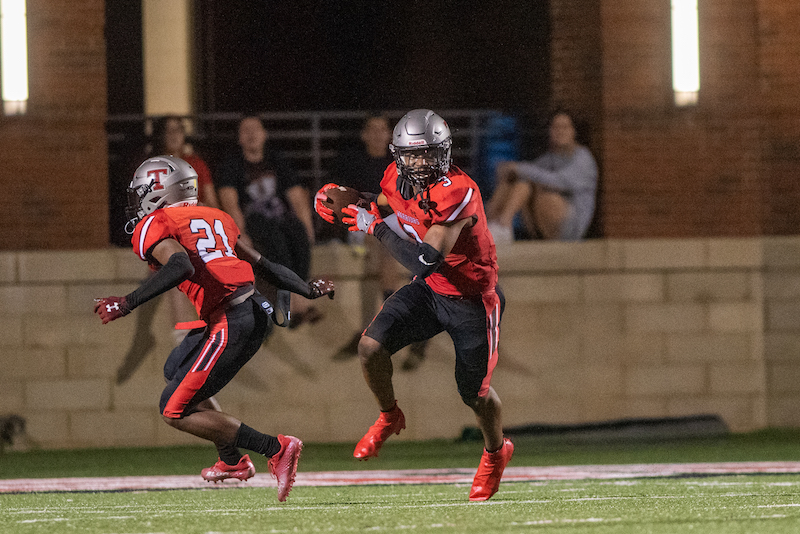 Thompson defensive back Tony Mitchell, one of the best players in the country, committed to the University of Alabama on Sunday, June 26. (File)

After months of visiting several of the top universities in the country, the 5-star defensive back from Thompson High School announced he would join the Alabama Crimson Tide in an Instagram post on Sunday night.

Mitchell, who has been a starter and won a state championship every year with Warriors since his freshman year, announced his decision with a graphic on social media that included the zip-mouth emoji with #rolltide next to it.

The second-ranked player in the state and a top-30 player in the country, Mitchell has been as high as a top-10 recruit over the last three years and is coming off a season in which defenses stayed away from him due to his ability.

During his junior season, Mitchell had eight pass breakups and two interceptions in the secondary with most teams avoiding his side of the field.

In addition to that, he totaled more than 40 tackles, including four tackles from loss.

That followed a sophomore season in which he totaled four interceptions, 75 tackles, eight tackles for loss and two defensive touchdowns. As a freshman, he put his name on the map as a starter for the Warriors who totaled 67 tackles, five tackles for loss, an interception and a fumble recovery.

While his lockdown presence in the secondary has been impressive the past three years, perhaps the most impressive stat is his ability to tackle in open space and also wreak havoc in the backfield when needed.

It’s something that led to him playing more than just corner at times, taking on more of a nickel position due to his size and tackling ability.

Mitchell chose Alabama over Auburn, Texas A&M and Georgia and was pursued by most major college football programs in the country.

He is now the second highly-touted Thompson player Nick Saban and the Crimson Tide have been able to keep in the state the last two years, as Mitchell will now join Jeremiah Alexander at Alabama, who joined the team in the spring.

Peter Woods, who is also a 5-star recruit from Thompson, is also strongly considering the Crimson Tide and is expected to announce his decision on Friday, July 8.