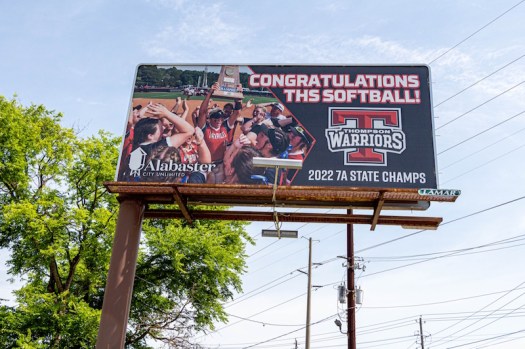 Three state championship teams from Thompson High School are being celebrated by the city of Alabaster with billboards honoring their wins. (Contributed) 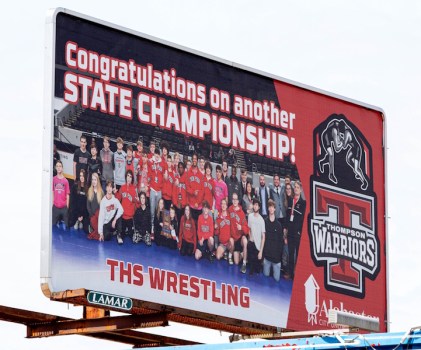 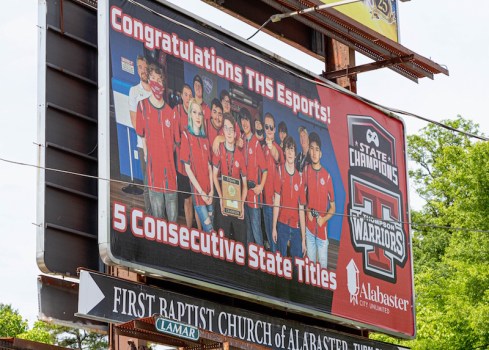 ALABASTER – Motorists driving along U.S. 31 in Alabaster might notice some new billboards recognizing the accomplishments of several sports teams from Thompson High School.

“The city has run billboards for the THS state champion teams the past few years, and fortunately, that list seems to keep growing each year,” said City Public Information Officer Neal Wagner. “We purchased a billboard for the state champion football team last December and wanted to honor the winter/spring state champions in a similar manner.”

The three billboards feature the softball, wrestling and esports teams for their success during the 2021-2022 school year.

“We are thankful to the city council for allowing us to place individual billboards along Highway 31 honoring the esports, wrestling and softball teams for their 2021/2022 state titles,” Wagner said. “We try to place those billboards in high-traffic areas because we want everyone to know how incredibly proud we are of our Warriors.”

The wrestling team got back in the winner’s circle this season after just losing out last year, while the softball team won its first championship since 1999 and the esports program continued a winning tradition that began with its start a few years ago.

The billboards will remain up for two months and were existing Lamar Advertising-owned billboards.

“We want to give a big thanks to Lamar Advertising for working with us on designing the billboards and finding the best locations for them,” Wagner said.

If more state championships happen in the upcoming school year, Wagner said the city will likely consider doing something similar to honor the teams.