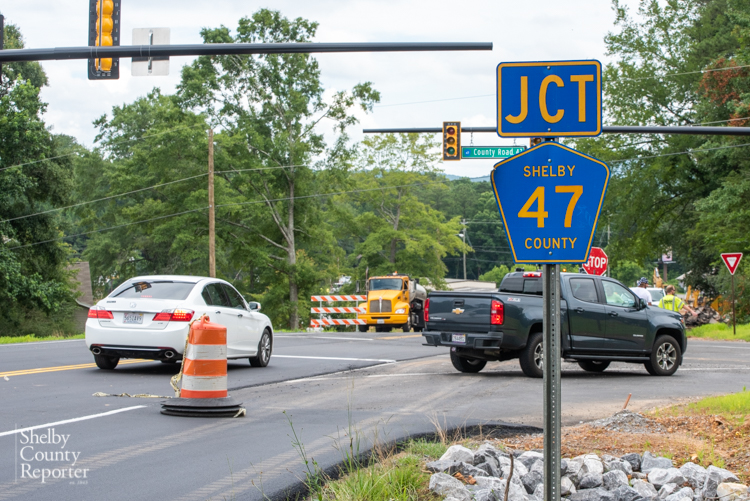 CHELSEA – One of Chelsea’s busiest roads will reopen on the morning of Friday, July 1, as crews finish an intersection realignment project.

“We’re finishing the paving, temporary striping and installing some signs,” Shelby County Engineer Randy Cole said on Thursday, June 30. “Although the project is substantially complete, there will be some grassing, some dress-up work on the shoulders, some permanent striping and some maintenance of erosion control measures that will be ongoing, but the good thing is we will be open to traffic tomorrow morning.”

The news comes just ahead of Chelsea’s annual July Fourth event, ChelseaFest and the Big Kaboom, which is set for Saturday, July 2.

“We’re pleased to be able to get it open before the Chelsea fireworks display,” Cole said.

The road’s reopening is also happening before Chelsea’s special election regarding a city property tax on Tuesday, July 12 at Chelsea City Hall.

Prior to the most recent closure, a section of Shelby County 47, also known as Chelsea Road, was closed from Shelby County 39 to Liberty Road for more than a month starting in March.

The primary goal of the 47-39 intersection realignment project was to alleviate traffic congestion near the railroad crossing and ultimately make the stretch of road safer for motorists.

Cole said he is glad to see the project coming to a close after various delays during the construction process.

“We had numerous delays on this project due to difficulties coordinating with the railroad, utility relocation, both water and sewer, telephone lines and power lines,” he said. “Then, we had some inclement weather. We’ve encountered a number of challenges on this project, but we have been able to move through and are pleased the project is nearing completion. It’s a much-needed safety enhancement.”