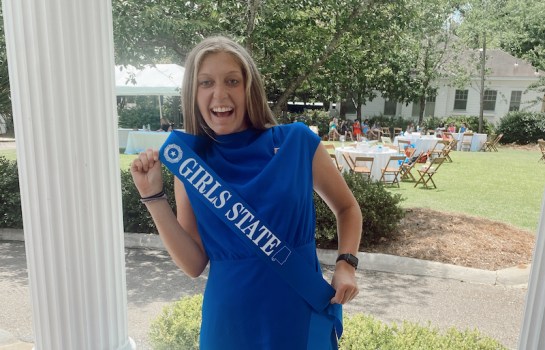 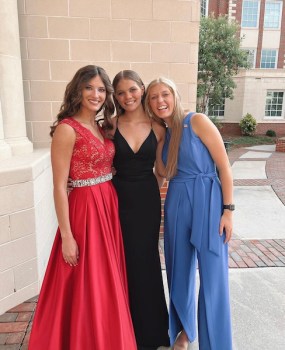 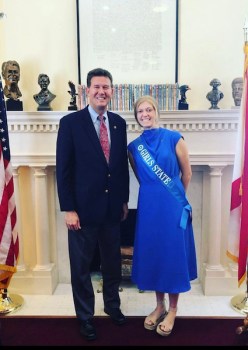 Alabama Girls State delegate LC Smith is pictured with Alabama Secretary of State John Merrill. After winning mock elections for Secretary of State, Smith had the opportunity to meet Merrill when the group traveled to Montgomery for a tour of the Capitol. (Contributed)

Laura Cavan “LC” Smith has felt the adrenaline rush that comes with winning an election for a state government office, and she is still in high school.

On June 6-10, Smith gathered with nearly 300 other students on the campus of Troy University for a variety of activities designed to give delegates a deeper understanding of the democratic process and how the government works at the state and national levels.

The rising senior from Shelby County campaigned for and won both the primary and general mock elections for Secretary of State.

“When I won the primaries, my city – the city of Lurleen – we were sitting together on the front row, and we were all holding hands,” Smith said. “When my name was called out, they were screaming for me. It was the best feeling I have ever felt.”

Smith said she worked hard to create a memorable campaign for Secretary of State.

When the group activities were finished each day, Smith would go back to her room and work on her speeches, which she delivered on stage in front of all of the other delegates.

“It was stressful, but it was such good practice to have to write my speech out the night before and try to memorize it,” Smith said. “It was also a great way to make new friends and meet new people.”

One of her favorite parts of campaigning was talking to people one-on-one and getting to know them better.

“I really like talking to people, and I love going up to new people,” she said. “I put myself out there.”

When she won the general election, Smith’s friends cheered loudly for her.

“The way the others lifted me up made me feel amazing,” she said.

Smith and her chosen chief of state met with Alabama Secretary of State John Merrill during the group’s trip to Montgomery to tour Alabama’s Capitol.

“Just to be able to meet him and (listen to him) tell us what he did and see where he worked, that was a great experience,” Smith said.

Smith and her fellow Girls State delegates also heard from national and state speakers and leaders throughout the week, including Gov. Kay Ivey, a former Girls State Lieutenant Governor.

Smith said one of the most moving speeches came from retired U.S. Air Force Maj. Heather “Lucky” Penney, one of two fighter pilots chosen to intercept United Airlines Flight 93 as it was headed to the U.S. Capitol on Sept. 11, 2001.

Before Penney and her commanding officer, Col. Marc “Sass” Sasseville, could get to the plane, however, the heroic passengers and crew on Flight 93 fought back against the hijackers, and the plane crashed into a field in Pennsylvania.

“It hit me and a lot of the other girls hard,” Smith said of Penney’s speech.

In addition, Smith said the delegates participated in several legislative sessions, learning how bills are passed and discussing political topics in the governmental setting.

Smith said her experience at Girls State gave her a better understanding of how government works and how it feels to be a college student living on campus.

At Westminster, Smith is a member of the National Honor Society, Westminster Ambassadors, Drama Club and the basketball and soccer teams.

Although she has not solidified her post-high school plans yet, Smith said Girls State gave her friendships and memories that will stay with her for a long time.

“The biggest highlight was definitely the girls I met there,” Smith said. “The relationships we managed to build in just a week were amazing. They were the nicest girls, and they were so smart and all very excited to be there.”