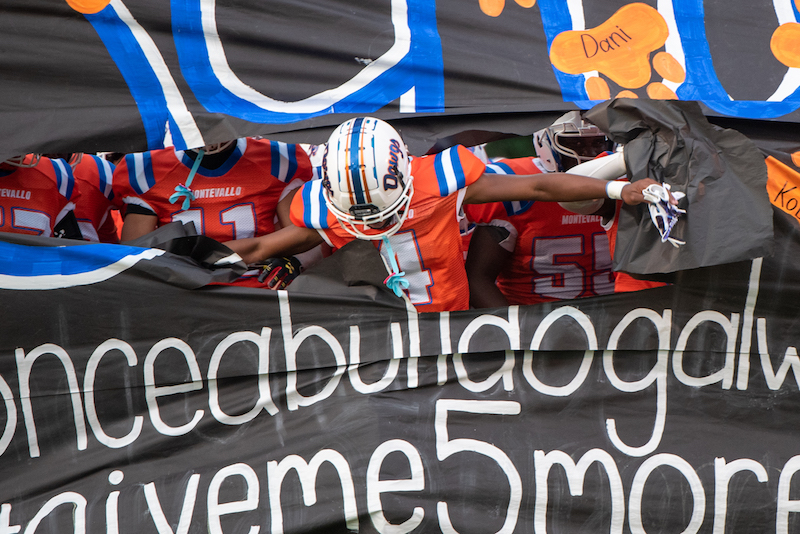 The Montevallo Bulldogs will face some challenging tests on their 2022 football schedule, but it’s one that provides opportunity for a fifth consecutive playoff berth. (File)

Last year’s senior class became just the third in school history to lead Montevallo to the playoffs in all four years at the school.

Now, heading into the 2022 football season, the Bulldogs are hopeful a second class in a row will achieve that, as the class of 2023 is ready for the challenges ahead.

A first-round playoff loss, however, has this year’s team hungry with a physical defense ready to continue on the strides it took last year.

Perhaps one of the biggest benefit to the Bulldogs heading into the season will be the schedule.

Not only will their region feature several new head coaches, but the two powerhouse teams—Bibb County and American Christian—will come on the back half of region play rather than up front.

That allows the Bulldogs to try and build up some confidence heading into those games, as they hope to compete for a region title and home-field advantage in the first round of the playoffs.

The last two years, Montevallo has lost both of those games but gone on to win the final six games of the season.

In 2022, they’ll have to play with that same motivation of “must-win” each week through the first half of the season to have hopes of a playoff spot or top-two seed.

They’ll also have to have a short memory and a quick shift in focus every week with their idle week being the first week of the season, which means 10 consecutive games from there.

The Bulldogs will, however, get the benefit of playing their first three games at home this season.

They’ll open on Aug. 26 with rival Shelby County in a non-region battle against a Class 5A team.

Last year’s game between the two was tightly contested, but the Bulldogs pulled away for a 41-24 victory. They have now won three of the last four games between the two teams with Shelby County winning 20-18 in 2020.

Montevallo will then remain home on Friday, Sept. 2 and Friday, Sept. 9 for back-to-back region games against Hale County and Dallas County.

Hale County is making the jump up from Class 3A after going 5-6 a season ago and falling 20-7 in the first round of the playoffs.

Dallas County will be a familiar region foe, as the two teams have met the last four years in a row with Montevallo winning all four, including a 49-14 game a season ago.

The Bulldogs will then hit the road on Friday, Sept. 16 for their first road game of the season, and it will come against another familiar region foe—West Blocton.

Montevallo won a tightly-contested 37-36 game a season ago, which was key in earning the Bulldogs a playoff spot.

The two have met every year since 2012 with the Bulldogs winning the last nine in a row. The last two games, however, have both been decided by one point, making that a key region game near the midway point of the season.

Following that week, Montevallo will remain on the road for the second of three consecutive road games when they travel to Jemison on Friday, Sept. 23.

The Panthers will be coming off a 1-9 season a year ago, but they’ll have the advantage of being a classification higher in Class 5A.

Montevallo will then tackle a third straight road game with a trip to new region opponent Sipsey Valley on Friday, Sept. 30.

The Bears are coming off a 3-7 season and haven’t won more than four games since 2012, but they’re back down to the 4A level after spending the last two years in Class 5A, which should now level the playing field for them.

Then starts a tricky stretch for the Bulldogs. They’ll return home on Friday, Oct. 7, but it will be against Bibb County, who is always a tough test.

Montevallo has lost to Bibb County 35-13 and 37-7 the last two years, while the Bulldogs have lost six of the last seven in the series and are 11-31 against the Choctaws all-time.

The final road test of the season will be a week later against Holt, who the Bulldogs beat 54-6 a season ago and have won three in a row against.

Then, they’ll close out region play on Friday, Oct. 21 against the usual favorite to win the region championship.

Montevallo won the matchup 14-7 in 2016, but American Christian has won the last five in a row and has scored 34 or more in each one of those wins, including 51 or more in four of the five.

The final game of the regular season for the Bulldogs will come on Friday, Oct. 28 against Tarrant.

Last season, Tarrant finished 0-8 and gave up 49 or more points in every game, while the Wildcats were shutout five times and scored eight or less in the other three games.

Montevallo will look to pick up one last win in the regular season finale with the hopes of a playoff matchup a week later.