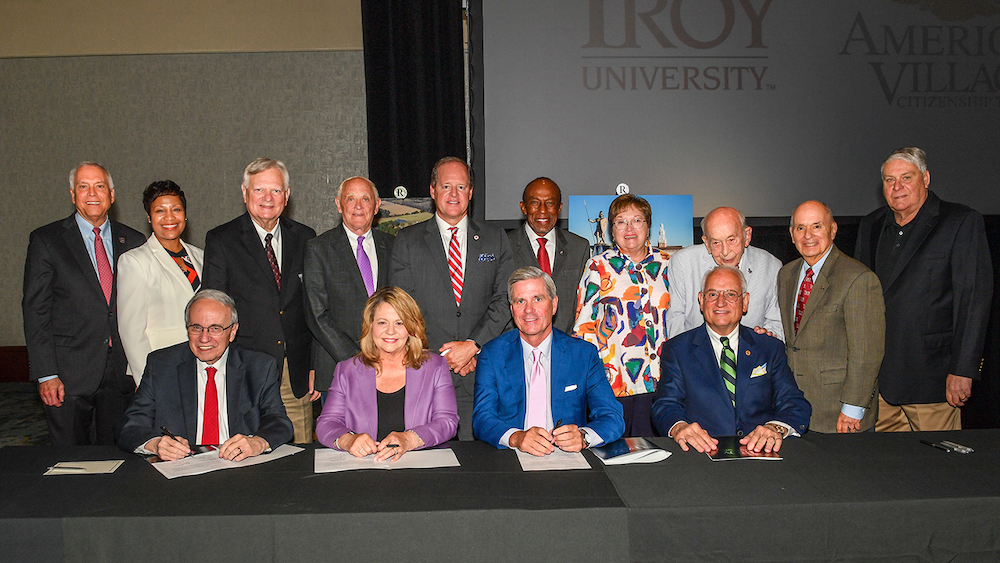 Officials from Troy University and the American Village sign a Memorandum of Understanding for the establishment and delivery of programming that will aid students and teachers in establishing increased knowledge and understanding of the country's founding and history, form of government and the responsibilities required of good citizenship. (Contributed)

Troy University and the American Village Citizenship Trust are teaming up to help Alabama youth increase their knowledge and understanding of U.S. history, the function of government and the role of the citizen in the governmental process.

A memorandum of understanding was signed by the two institutions in Montgomery on Thursday, creating a Young Leaders Program designed to educate students regarding the founding and history of the United States; the structure of federal, state, and local government; and the elements of good citizenship and statesmanship. The program will target high school junior and seniors and will be administered by TROY’s Institute for Civic and Global Leadership. Participants will receive three-hour credit for TROY’s Leadership 1100 course by passing a challenge examination.

A Civics Education Micro-credential will be developed for teachers who teach middle or high school civics, American national government, U.S. history and/or those responsible for preparing students to take the civics examination for high school graduation.

As a part of the agreement, American Village and TROY will develop and market a test and supporting curriculum to assist Alabama public schools in satisfying state-level civics and government requirements for high school graduation. In addition, online and hybrid curriculum delivery options will be facilitated through ACCESS (Alabama Connecting Classrooms, Educators, and Students Statewide).

The agreement also calls for the creation of supplemental U.S. history curriculum materials, also supported through ACCESS, and will create an American Village-Troy University Partnership Advisory Board.

All of those efforts will work together to help increase understanding and awareness of the principles that have made America a great nation, Dr. Hawkins said.

“We have a long way to go before the average person in this country understands the very basics and fundamentals that are required to function in a free and democratic society,” Hawkins said. “We are very proud at Troy University to partner with the America Village to help Alabamians understand in a much deeper way their responsibilities in civics and in the knowledge of history and the understanding of what we have to do to move forward, together as a nation.”

“We are deeply grateful to Dr. Hawkins, to the Board of Trustees and to Troy University for its leadership,” Walker said. “We think that these times require that we work smartly and that usually involves partnerships. We believe that this is a natural partnership and one that we can continue to build on in the future. We believe that this is an opportunity for the state of Alabama to take the lead in our country in increasing American history literacy and increasing civil participation and that is our goal.”

American Village Board Chair Carol Brown said she believes the core elements of the partnership will have a tremendous impact for the state of Alabama, as well as for both institutions.

“We are excited about this new partnership with Troy University that has been years in the making,” Brown said. “We hope its core components — youth leadership, civics and history centered on the founding of this great country — will also open other doors to educational institutions seeking similar opportunities. We look forward to working with TROY in finalizing the details of this new venture.”