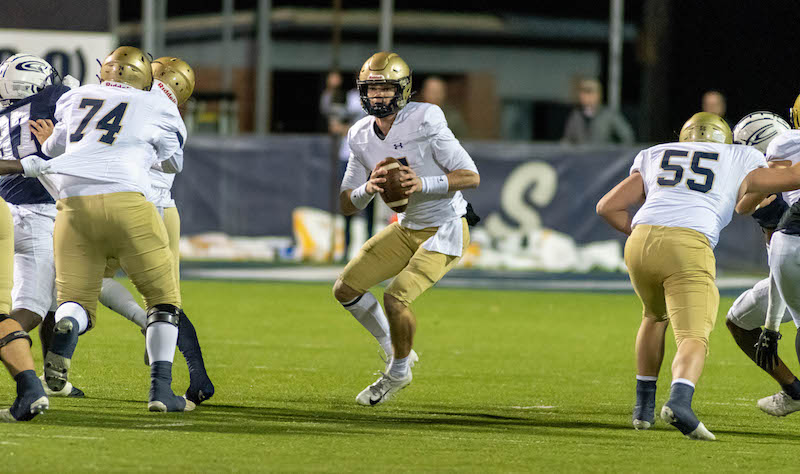 The Briarwood Lions will face one of the toughest schedules in Class 6A this season with seven playoff teams, one state champion and three 7A teams in non-region play on the schedule. (File)

The Lions, who have finished second in the region standings each of the last two years competing against the likes of Mountain Brook, Homewood and Chelsea, will now move from Region 5 to Region 3 to compete against a region schedule that features four playoff teams from last year.

Heading into year four under head coach Matthew Forester, the Lions have won at least eight games in each season of his tenure, including 10 or more twice.

That, combined with one of the country’s highest-rated quarterbacks in Christopher Vizzina back for his fourth year as a starter has the Lions hopeful for a big season in 2022.

There will, however, be several key pieces to replace on this year’s team, and the schedule will feature several new challenges.

The schedule won’t just feature a challenging schedule, but the Lions will take on five other teams from Shelby County, seven playoff teams, one state champion and three 7A teams in non-region play.

It’s an extremely challenging schedule that will start with a bang to open the season on Friday, Aug. 19.

Briarwood will take the short trip up to Clay-Chalkville, who is entering the season off a 15-0 state championship season in 2021.

The playoff trek for the Cougars also included a 56-21 win against the Lions in the second round, while they have won at least 10 games and been to at least the third round of the playoffs each year since 2017.

It will be one of two challenging tests to open the season for the Lions, as they’ll host 7A Spain Park a week later on Friday, Aug. 26.

This year, Tim Vakakes has taken over the Spain Park program and hopes to rebuild it to the recent glory days of competing for state championships.

That instantly makes this game intriguing before the two enter region play.

Briarwood will then open region play on Friday, Sept. 2 with a home battle against Chilton County, who finished last season with a 3-7 record.

The Lions are 6-1 all-time against the Tigers, but the two haven’t met in nine years.

The Panthers have finished in the top two of the region standings the last two years, including a region title in 2020, but they’ll be under a new head coach this year with Mike Vickery taking the reins from Tom Causey.

Following a bye week on Oct. 16, Briarwood will return to action in a non-region road game against Oak Mountain.

The Lions will make the short 2.9-mile trek down Alabama 119 for this 280-area rivalry battle that should create plenty of entertainment in a game with no region implications.

Oak Mountain loses star quarterback Evan Smith going into the season, but the Eagles have won the last two in the series 35-0 and 42-12. The Lions, however, won 42-13 and 34-0 in the first two meetings.

On Friday, Sept. 30, the Lions will take on Helena, before then hosting Calera on Friday, Oct. 7.

Similar to Briarwood, the Huskies have finished inside the top two of the region standings each of the last three years, but Helena has won the region championship twice in that span.

They’ll be the defending champs looking for another title this season and could present the biggest challenge on Briarwood’s region schedule, making this an intriguing showdown to close out September.

A week later, the Lions welcome the Eagles, who are fresh off their best season at the 6A level last year under first-year head coach Jason Hamlin.

Now, Calera is more experienced and they’ll be in the second year under Hamlin, making that a more challenging opponent in 2022 than it would have been a few years ago.

Briarwood will follow those two home games with two straight on the road to finish the region slate.

The Lions will travel to Benjamin Russell on Friday, Oct. 14 to take on a Wildcats’ team that was 3-7 last year and 1-5 in region play.

Following that must-win game, Briarwood will close region play on Friday, Oct. 21 with a battle against rival Homewood.

The last two years, this game has determined home-field advantage in the playoffs with Briarwood winning 28-6 in 2020 and 21-18 in a thriller last year.

It wouldn’t be surprising at all to see the same implications in the final game of region play this year either.

The regular-season finale will feature another difficult challenge for the Lions, as they’ll welcome 7A Fairhope to town.

The Pirates finished 9-2 last year to claim a region championship and have won eight and nine games each of the last two seasons.