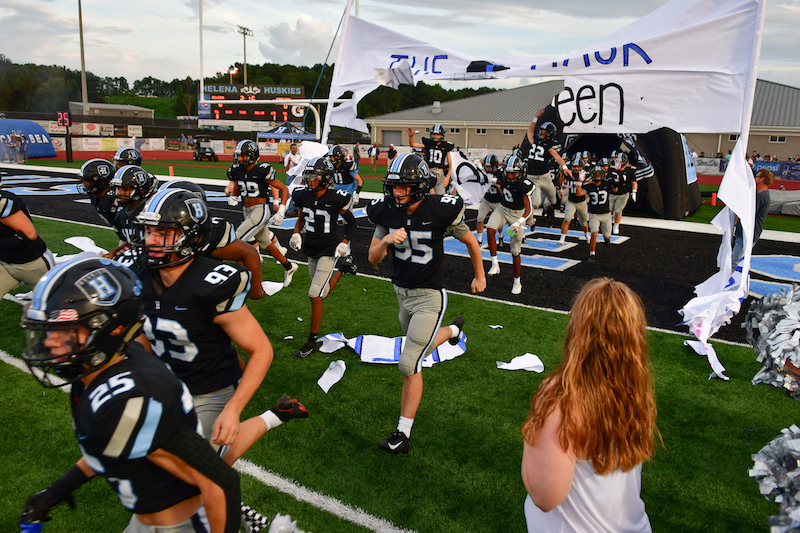 The Helena Huskies will enter the season hoping to conquer new opponents on this year’s schedule as they look for their third region championship in the last four years. (File)

Fresh off winning their second region title in the last three years, the Helena Huskies will hope for similar success during the 2022 season.

Heading into year five under head coach Richie Busby, the Huskies have gone 29-15 over the last four years, including 9-2 during both region-championship seasons.

This year, however, the schedule will change slightly with new region opponents sprinkled throughout the schedule, including Briarwood and Homewood.

Those two alone will make winning another region championship difficult enough, but the Huskies will also have other challenges in region play with games against Pelham, Calera and others, while they’ll play two teams from Class 7A in non-region action as well as a difficult 6A opponent.

Needless to say, finishing inside the top two of the region standings for the third year in a row and winning a second consecutive region title won’t come easy.

Helena will open the season against former region foe Chelsea in the AHSAA Kickoff Classic on Thursday, Aug. 18 at the Cramton Bowl in Montgomery.

The two teams have met every season since Helena’s football program started and the last five games have all been decided by 13 points or less.

Helena has won three of the last four, but this will be the first against the 7A version of Chelsea, which offers the Huskies a great opportunity for a momentum boost right out of the gate on a big stage.

The Huskies will follow that with a good opportunity to gain even more confidence a week later on Friday, Aug. 26 against Buckhorn. A 6A opponent, Buckhorn finished 5-5 last season with all five losses coming in the final eight weeks of the season following a 3-0 and 5-2 start.

It will mark the first meeting between the two teams.

Helena will then open region play at home on Friday, Sept. 2 with a battle against Homewood.

It’s as important of a first game to region play as you can get with both entering the season with high hopes of a region title. A loss, however, would put one behind the eight ball with opponents such as Briarwood, Calera and Pelham still ahead.

The Huskies will then travel to Chilton County for a matchup with the Tigers on Friday, Sept. 9. Helena won last year’s game 48-40 but felt as if it was a lackluster performance.

This year, the Huskies can’t sleepwalk through that game despite a 4-0 record all-time against the Tigers.

Helena will return home on Friday, Sept. 16 for a crucial rivalry showdown with rival Pelham.

A game that has determined the last two region champions, Pelham got a forfeit win during the COVID year to win the region title, while Helena won last year’s game to claim the region title.

The two teams have both finished inside the top two of the region standings each of the last two years and both know that places even more emphasis on this rivalry battle of two schools that used to be one.

Last year’s game also added even more fuel to the fire after the Huskies walked away with a thrilling late 37-34 victory that determined the region title.

Helena will take a break from region play against Jackson-Olin at home on Friday, Sept. 23.

The game, however, will feature a challenge. The Mustangs will be led by a new head coach, but they are fresh off a 9-3 season that saw them make the second round of the playoffs.

Luckily for the Huskies, the two games will be separated by a bye week at possibly the best time of the season.

On Friday, Sept. 30, Helena will travel to Briarwood for a new challenge against the Lions, who have made the second round of the playoffs each year since 2014.

They have also finished second in a very challenging region each of the last two years in their return to the 6A classification.

There is a very real possibility this game could decide the region champion this season if both teams play up to their potential and standard.

Following the bye week on Oct. 7, Helena will head to Calera on Friday, Oct. 14 for a battle against a continually improving Eagles’ team.

Helena holds a 5-1 record against Calera, winning the last five games in a row between the two.

Last year, however, took a special comeback late in the game for the Huskies to pull off a 31-21 victory.

Calera shouldn’t have much of a drop-off this season and neither should Helena, which should create for a fun county battle in the second-to-last region game of the season.

The Huskies will close out region play on their home field on Friday, Oct. 21 with a matchup against Benjamin Russell, who they have beaten a combined 80-14 the last two years.

It marks the first meeting between the two since 2017 with the Rebels winning the only two matchups 14-0 and 34-12.