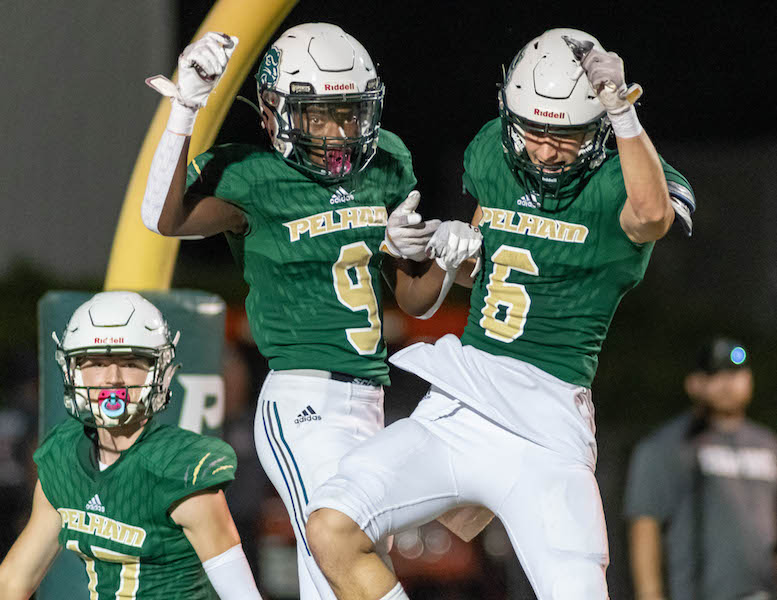 The Pelham Panthers will face a challenging schedule in 2022 that features seven teams who made the playoffs during the 2021 season. (File)

Following seven years under Tom Causey, the Pelham Panthers will enter a new era when the 2022 football season kicks off with Mike Vickery now taking the reins.

Causey led Pelham to their best season since 2006 in 2020 with a region title and eight wins, while he finished his tenure with back-to-back winning seasons.

The Panthers, however, still haven’t made the second round of the playoffs since going to the third round in 2006.

This year, they’ll hope to find that type of success under Vickery, but it won’t come easily with a challenging schedule ahead that includes seven playoff teams from last year, three 7A teams in non-region play and a challenging region featuring five total teams that made the postseason a year ago.

The schedule as a whole will feature six other teams from Shelby County as well, including three in region play.

The Vickery era will get underway on Friday, Aug. 19 at home against Jackson-Olin in the Panthers’ only non-region game against a team not in Class 7A.

That said, it won’t be an easy one. The Mustangs will be under a new head coach after Tim Vakakes left for Spain Park, but they are off a 9-3 season last year that saw them advance to the second round of the playoffs.

Following that difficult opener, Pelham will hit the road for the first time for a rivalry battle against the Oak Mountain Eagles on Friday, Aug. 26.

It marks the fifth consecutive year the two teams have met, but the Eagles have won the last three in a row.

Oak Mountain will be replacing Evan Smith, last year’s Player of the Year in Shelby County, but they’ll also have plenty of talent back at the 7A level, especially on the defensive side of the football, which should create another tough test early in the season for Pelham.

Following an early-season bye week a week later, the Panthers will return to action on Friday, Sept. 9 for their first region game of the season in a home matchup with county foe Briarwood.

It’s the second of five consecutive games against teams from Shelby County, while it will come against a Briarwood team that has made the second round of the playoffs every year since 2014.

Since jumping back to 6A in 2020, the Lions haven’t won a region title, but they have finished second both years and now look to be a contender yet again for a top-two finish in a slightly different region.

This is a game early in region play that could have major implications for a possible region title or home-field advantage in the first round of the playoffs.

It’s an important game for the Panthers, who will hit the road the following three weeks, including a big battle on Friday, Sept. 16.

That’s when they’ll head a few miles up the road to take on rival Helena.

One of these two teams has won the region title the last three years with the Huskies winning in 2019 and 2021 and Pelham winning in 2020.

Last year, Helena won a thrilling 37-34 battle that went down to the wire and ultimately decided which of the two won the region title.

It wouldn’t be surprising if this year’s game had just as much importance placed on it, as both teams will be laser-focused going into the rivalry battle.

Pelham will get a break from region play a week later on Friday, Sept. 23 with another in-county battle against Chelsea.

A former region foe of the Panthers, the Hornets are now in Class 7A following this year’s reclassification.

The two teams have played each year since 2016 and have split the six matchups for a 3-3 record against each other.

This year’s won’t have any region implications with it, but the Panthers fell 31-28 last year in a tough game and will be looking for redemption, while it will mark a battle of two first-year head coaches with Todd Cassity taking over at Chelsea.

Vickery and Cassity will both be looking to keep confidence high during the region break for a final push in difficult regions.

Pelham will close out the stretch of road games on Friday, Sept. 30 with a matchup against Calera.

The Panthers have won three of the last four between the two teams, including a 34-30 game last year, but the Eagles are fresh off their first playoff berth at the 6A level and took major strides in 2020 under first-year head coach Jason Hamlin.

This could be one of the more compelling games on the schedule for the two, especially at the midway mark of region play. Who knows, it could ultimately decide if one makes the playoffs or not.

Following the battle with the Eagles, Pelham will have its most important stretch of the season the next three weeks.

It will, however, start on short rest when the Panthers return home on Oct. 6 for a Thursday-night battle with Benjamin Russell.

A week later will come a rivalry battle in region play against the Homewood Patriots on Friday, Oct. 14.

The Panthers finally got the monkey off their back a year ago against the Patriots. Following seven straight losses dating back to 2014, including four by seven points or less, Pelham was able pick up a 10-7 victory last season.

This year, however, there will be added importance as the two are now area opponents again for the first time since 2019. Another home game for the Panthers, this is part of that important stretch of needed games late in the season.

Pelham will then close region play on Friday, Oct. 21with another must-win game on the road against Chilton County.

The Panthers will then finish off the season with one last in-county matchup against 7A Spain Park.

The game will take place on Thursday, Oct. 27 and will feature two first-year head coaches hoping to be preparing for a playoff game a week later.