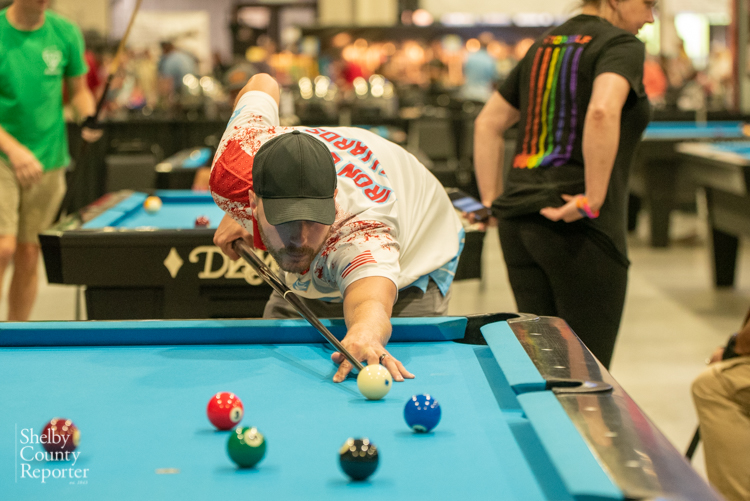 The Pelham Civic Complex hosted the 8ball and 9ball competitions of the Birmingham APA World Qualifiers tournaments the weekends of June 11 and June 18. (Reporter Photo/Keith McCoy)

PELHAM – The Pelham Civic Complex served as the location of the Birmingham APA (American Pool players Association) World Qualifiers billiards tournament for the weekends of June 11 and June 18.

The weekend of June 25 held the semi-finals and finals for 8ball and 9ball teams out at Iron City Billiards in Roebuck. Six teams per category were chosen as the winners, and the winning teams will represent the organization at a competition in Las Vegas in August for the chance to win up to $25,000.

Amber and Michael Glass are the directors of the organization, and Amber said the organization is the world’s largest amateur pool league, as stated in the Guinness Book of World Records, with over 250,000 players. They also have tournaments for kids to teach them how to play the sport.

“A lot of people think of a pool hall and think of what it was like back in the day, and it’s really not like that anymore,” she said. “It’s a lot more family-friendly, and we try to get everyone involved because it really is a great time.”

Billiards has accomplished a major milestone this year as it will be featured as an event during the World Games, a first for the sport. Though it’s not affiliated with the APA organization, Amber said the feat is a huge deal for the organization and the sport.

“This is a huge deal,” Amber said. “We actually had a World Games representative come to our captain meeting to try and recruit volunteers to work the event because they have so much knowledge about the sport. So, we will have some of our APA players volunteering there. Everyone is so excited.”

For more information about the APA, visit Poolplayers.com.