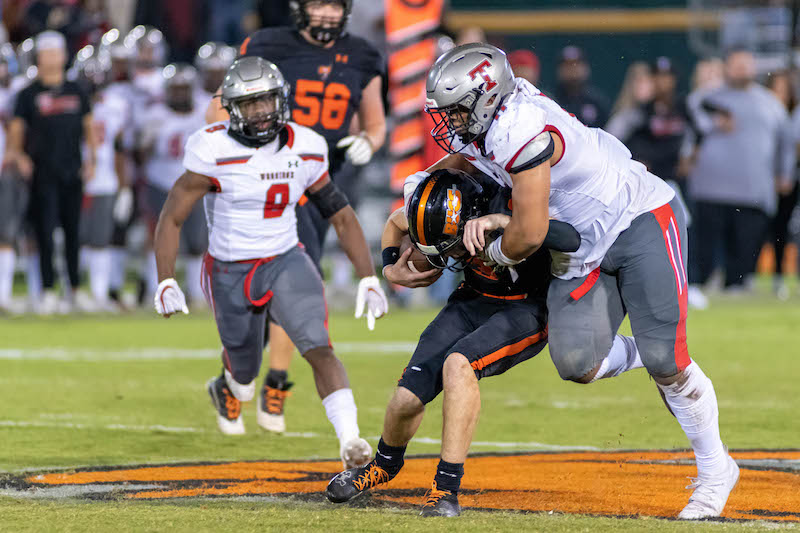 ALABASTER – Since he was young, his parents invested in him, and since his eighth grade year, he committed himself.

On Friday, July 8, that all paid off for Thompson defensive lineman Peter Woods when he announced his commitment to Clemson University to play college football.

The 5-star recruit, who is ranked 23rd in the country by 247Sports and has been a top 25 recruit for the past four years, chose Dabo Swinney and the Tigers over Alabama, Florida and Jackson State University.

“I believe in coach Swinney’s ability to feed into players mentally, spiritually and physically,” Woods said during his commitment at Thompson High School on Friday night. “And coach (Nick) Eason coming in from Auburn. Our relationship carried on and that was a good relationship I had. He had been there before. He has lived where I want to live and coached where I want to be.” 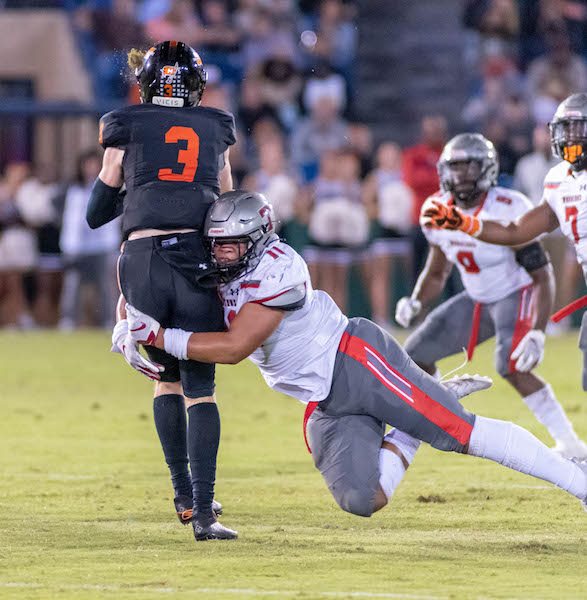 Standing a 6-foot-4, 275 pounds, Woods has been on the scene since his eighth grade season.

That year, coach Woodrow Briggs told the varsity coaching staff he could make a difference at the varsity level. Trusting the words of the team’s defensive line coach, head coach Mark Freeman and defensive coordinator Shawn DeFoor made the decision to bring him up at the end of the season.

Sure enough, he played in the state championship as an eighth grader.

He has since started in three consecutive state championship win for the Warriors and shown the ability to be one of the country’s best players.

As a freshman, he totaled 56 tackles, 15 tackles for loss and seven sacks against a physical and tough schedule that was one of the toughest in the country.

Injured during his sophomore season, he still made it back for the state championship game and finished the season with eight tackles for loss and four sacks.

He followed that up last season with a jaw-dropping season that featured 51 solo tackles, 40 assisted tackles, 28.5 tackles for loss and 11 sacks.

The success took work for Woods, but was like second nature for him as someone who had played the game since he could basically walk.

“I knew I always had the potential, because I was blessed with the size and the IQ of knowing what to do when coached and how to be coachable,” he said. “I knew if I put those together with my talent, it was possible.”

Now, he’ll play for one of the top college football programs in the country where he’ll join fellow Shelby County player Christopher Vizzina. The Briarwood quarterback is considered one of the best in the country and committed to the Tigers earlier this year.

It’s a recruiting class that is shaping up to be one of the top in the country for Swinney and Clemson, as 15 class of 2023 4-star players and now a 5-star are committed to the program.

“It’s a blessing to be here,” Woods said. “To have all my family and friends out here. I know it’s a blessing just to be here and something so many don’t get the opportunity to have.”

Woods said he felt the time was right to announce his commitment so that he could fully shift to his teammates at Thompson in the coming weeks as he prepares to help the Warriors chase down a fourth state championship in a row, which would give him one all four years of high school.