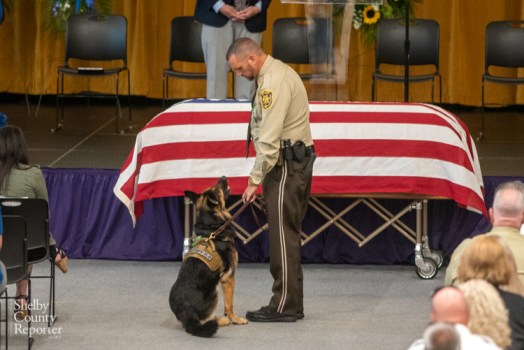 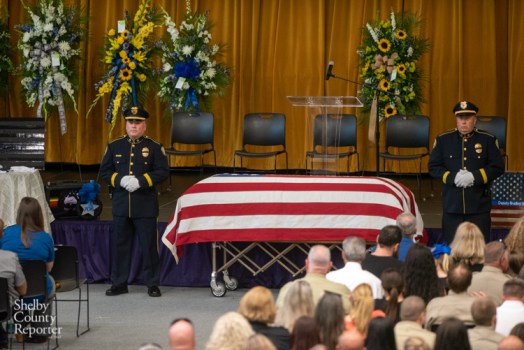 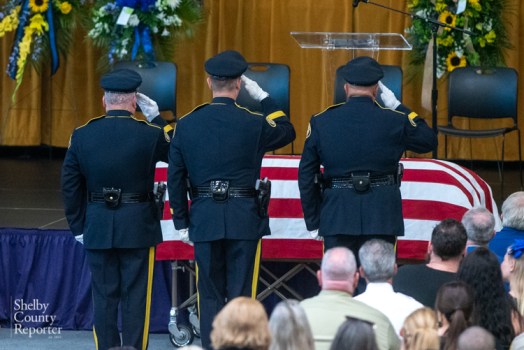 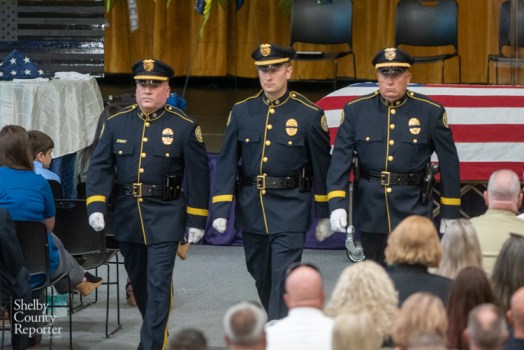 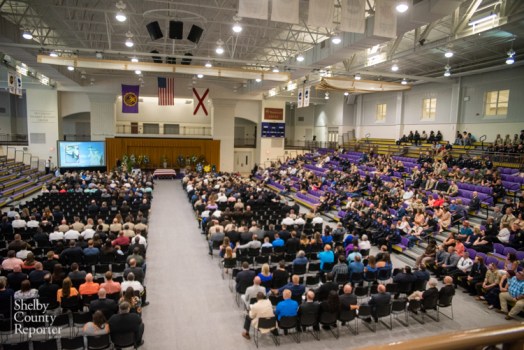 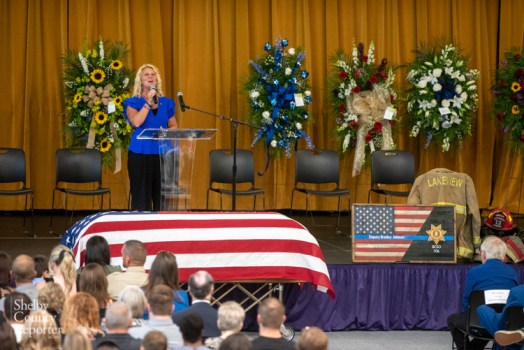 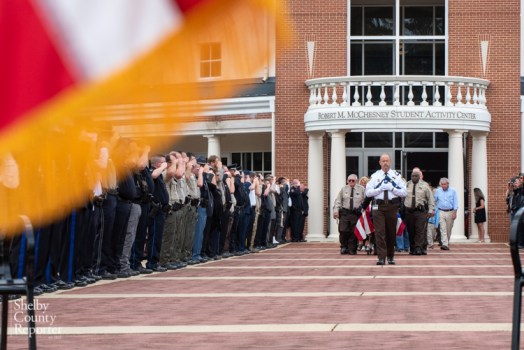 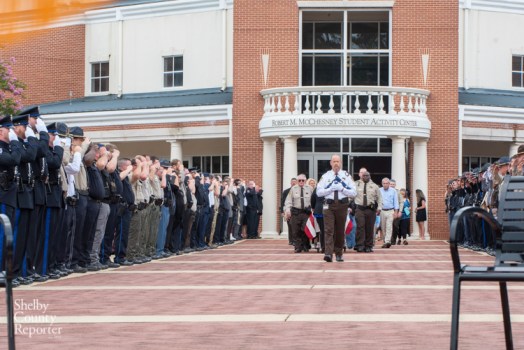 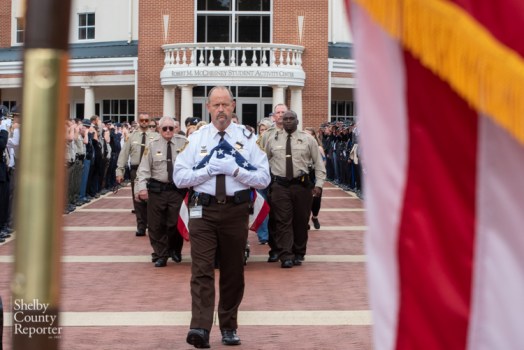 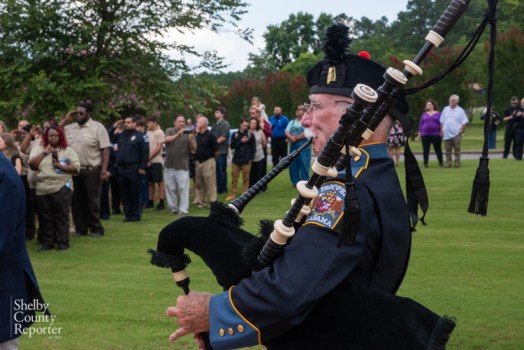 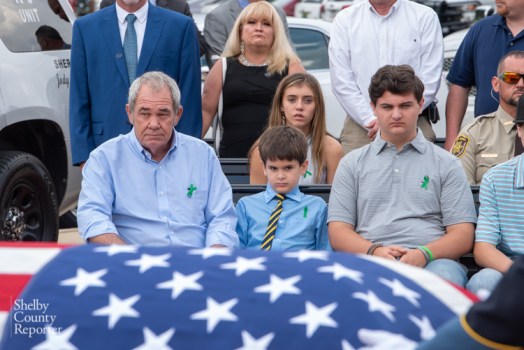 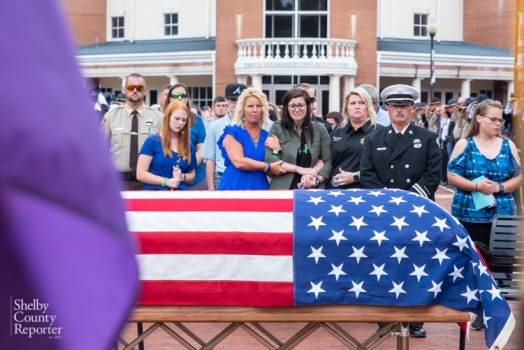 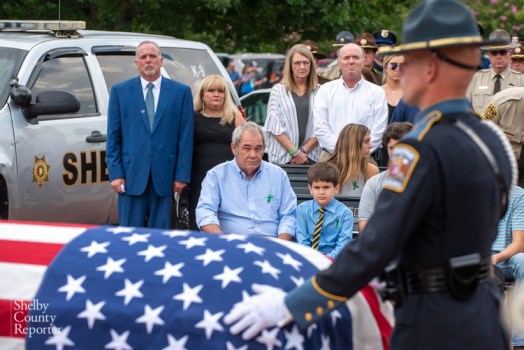 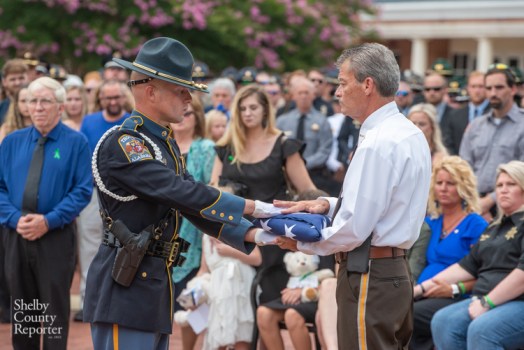 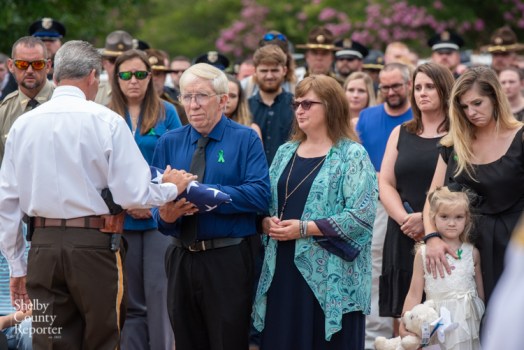 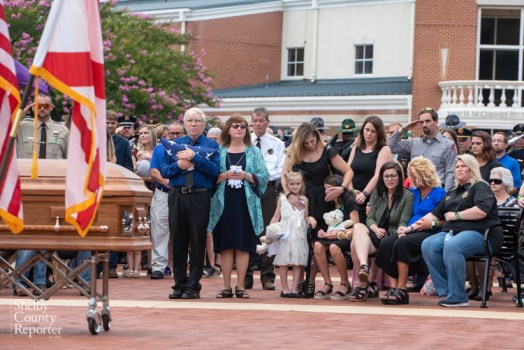 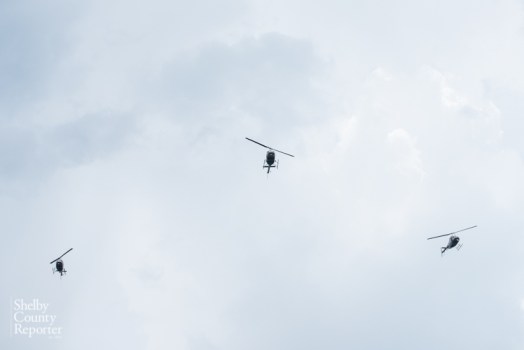 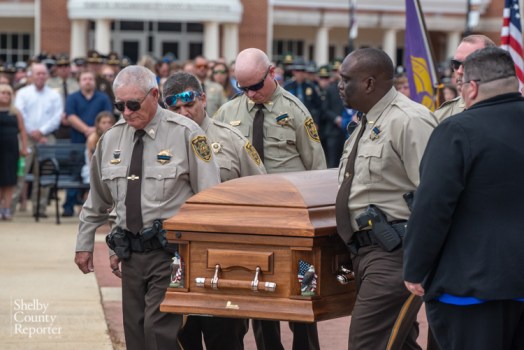 MONTEVALLO – For anyone who did not know Bibb County Sheriff’s Office K9 Deputy Bradley Johnson personally, listening to his family members, colleagues and friends speak at his memorial service at the University of Montevallo’s Student Activity Center on Friday, July 8 was like an overdue introduction.

The word “hero” emerged countless times in the moving tributes to Johnson, 32, who died the day after he and another deputy were shot while pursuing a suspect on Wednesday, June 29.

“As his family, we could not be more proud of him,” Bibb County Sheriff Jody Wade said. “To speak for Brad’s law enforcement and first responder family, we would like to thank his family for Brad. We thank you for Brad; the service he gave, the life he lived and the legacy he leaves behind. It’s been said that a coward dies a thousand deaths, a hero but one. Brad Johnson was a hero.”

In a letter read during the service, Officer Chris Poole, the other deputy who was shot with Johnson, reflected on their friendship and memories they had made together, from fishing trips to seeing their kids play with each other to serving as officers together.

Johnson, Poole wrote, taught him much about law enforcement and life in general.

Poole directed part of the letter to the suspect who shot him and Johnson, emphasizing his resolve to keep doing his job despite the lingering question of why it happened.

“You may think you took two law enforcement officers off the force, but you didn’t,” Poole wrote. “You made one stronger here on earth after I recover, and one a deputy in heaven. Can you imagine the strength of us, the strength we’ll have now?

“I’m sorry, Brad, that you left this earthly world, and I wonder if this job is even worth it anymore, but I know exactly what you would say: ‘Keep on fighting the fight against the bad guys,’” Poole continued. “I know there are still people out there who still need us. Until we meet again, I’ll fight this fight and run the race until one day I get to see you again.”

Bibb County Sheriff’s Office Lt. Ned Underwood described Johnson as a “prankster” who enjoyed a good laugh, but also as someone who ran head-first into dangerous situations if he thought he could help someone.

“I had the pleasure and privilege of being his FTO from the start of his career, and one of hardest things I had to get out of him was getting Bradley to understand we don’t run into fires,” Underwood said. “Bradley had a heart of a servant, and in every way, he wanted to serve his fellow man. Every tool that he had, he took it on the job with him every day.”

Underwood told a story about when the air conditioner at his house stopped working, and Johnson showed up with a new thermostat to install for him, declining Underwood’s offer to pay him back.

“He said, ‘I can’t take your money. I couldn’t have my LT out here sweating,’” Underwood said of Johnson. “He always made it personal. He always showed the utmost respect, and I always loved him for it.”

“Life is short,” Steven said. “We never know what the next fate will turn our way. Hold your loved ones close because you never know when it will be their last time to see you.”

He also thanked everyone for their support following Bradley’s death.

“Because Bradley had etched his life in so many people, I would have never imagined my little boy being able to touch so many lives,” Steven said. “Hold your brothers up each and every day in prayer. They need it now more than ever.”

In another written piece shared during the service, Bradley’s brother, Jacob, wrote about their childhood and the many things his older brother taught him.

“In my life, he was and always will be my hero, as well as everyone else,” Jacob wrote. “My brother was always the guy to call if you needed anything, and he was a great listener. He truly cared about everyone.”

Pastor Mike Woods said Bradley had a heart to help people and embodied the characteristics of a hero, such as courage.

“He was a great encourager,” Woods said. “He seemed to make it a mission that if you’re having a bad day, he’s going to do something about it. He was a man of empathy. He had the ability to step into someone’s shoes, the ability to set aside his own perspective and try to see things through their eyes.”

The Honor Network President and Founder Chris Heisler explained the significance of the United States Honor Flag at Bradley’s service.

“This small, folded, single American flag has honored thousands of fallen police officers, firefighters and soldiers all over the nation and around the world,” Heisler said. “Whenever it’s handled, we use brand-new custom gloves to handle that flag, and when we’re done working a particular mission, we give those gloves over to the family members. We’re happy to bring this flag here with the commitment to his family and to his brothers in brown and blue that this flag will continue to move on to honor those who have made the ultimate sacrifice.”

According to his obituary, Bradley became a first responder at the age of 17, when he began volunteering with Lakeview Fire Protection District.

He eventually reached the rank of lieutenant and leader of the Young Explorer Program.

He then volunteered with West Blocton Volunteer Fire Department, where he held the rank of captain.

He began volunteering as a reserve officer in Woodstock Police Department, but was hired as a full-time Bibb County Sheriff’s Office deputy in August 2014.

He attended the Northwest Regional Police Academy, where he graduated in December 2014.

In April 2017, he was appointed K9 handler and completed a 200-hour K9 Handler certification course, where he was partnered with K9 Bodie.

Since 2017, he and Bodie have completed more than 240 hours of additional training and certification.

He was also a member of Cahaba FOP Lodge #44 and held rank as sergeant-at-arms.

As an organ donor, Bradley’s final act of heroism is continuing to save others’ lives in his death.