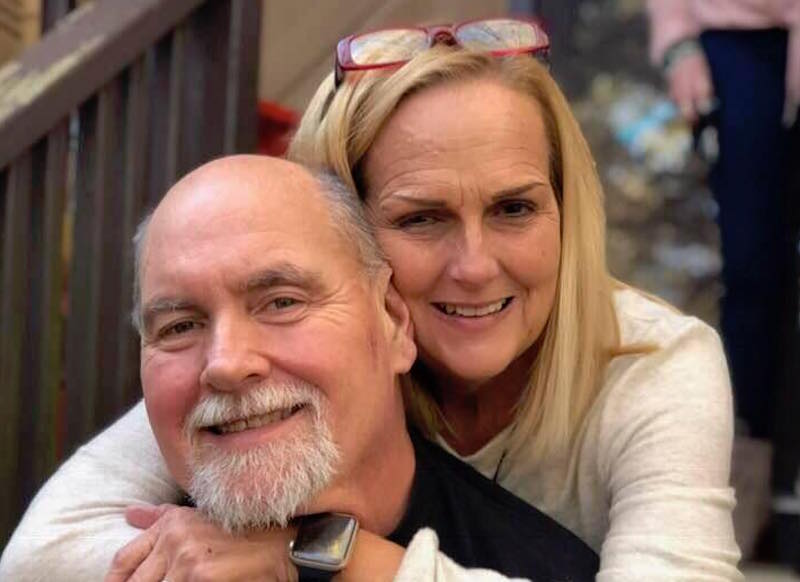 Frankie Crim, above with her husband Paul, passed away on Monday, July 11. She was a passionate Thompson football fan and photographer, while she cared deeply about the city of Alabaster. (Contributed)

Standing in line for snacks and refreshments at the annual Christmas Village at the BJCC in downtown Birmingham, I heard a boisterous “Alec!” only to turn around to see the friendly face of Frankie Crim.

Just a few weeks after the Thompson Warriors had won their third consecutive state championship, she was still glowing with excitement from the game, yet neither of us could avoid looking ahead to the 2022 football season.

Now, the season will have a different feel.

Crim, a graduate of Thompson High School and longtime photographer on the sidelines at each football game, passed away on Monday, July 11.

You’d be hard pressed to find someone who cared more about Thompson football than her, and that says a lot considering the passion surrounding the program in the midst of their best stretch in school history.

Not only did she enjoy supporting the Warriors and being up close to the action each week, but she froze time for so many athletes.

On Monday night and Tuesday morning, those athletes flooded social media sharing just how much of a personal impact she had on them.

Posts came from last year’s Mr. Football winner Ryan Peppins, Noah Tanner, head coach Mark Freeman, parents of several players, other photographers who competed with her each week for the best shots and many more.

One post in particular that stuck out came from Kerri Pate, the mother of former state championship quarterback Sawyer Pate. She posted a group of photos Crim had taken of her son, including one after breaking his nose in a game.

Sawyer, who had to have his nose reset on the sideline, had nosebleed plugs in each nostril and blood all over his white uniform.

Guess who was there to capture the entire moment? That’s right, Crim.

Not only did she get a picture of it, but she got a smile and thumbs up from Sawyer after the fact.

And that’s what made her special.

Even in a painful and difficult moment, she found a way to capture it and still get a smile. Now, Sawyer has photo proof to share with his battle-scar story.

It was those moments that always stuck out to me, and when I walk the sideline for the first Thompson football game in 2022, it’s those moments I’ll miss the most.

That, and her coming up to me and either applauding or disagreeing with my prediction for the week.

I always looked forward to those conversations, even if I knew she was coming up to give me a hard time. She did it in such a friendly way that by the end of the conversation, she was right.

While I will miss those moments, so will many others.

They’ll miss the passion she had for the team, the city of Alabaster and photography.

Sawyer was just one example, but high school football is one of the most special times in a young person’s life. It’s something that goes by so fast and they wish they could last forever.

Thanks to Crim, those memories did last. She captured those moments and gave the players a chance to always remember the glorious days of high school football.

Without her on the sideline this fall, there will be an emptiness, but now, she just has the best view of all, and I’m sure she’ll make sure we get a picturesque start to the 2022 football season when the Warriors host Buford on Aug. 19.