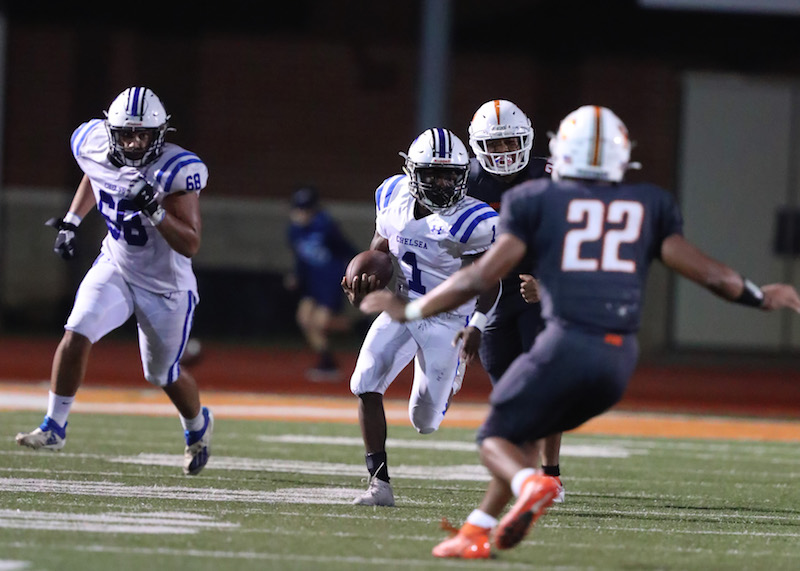 There will be a lot of new at Chelsea during the 2022 football season.

A new head coach, a new classification, a new schedule, a new playing surface and several new players are among a handful of changes that will make the upcoming season challenging, but they’re challenges new head coach Todd Cassity and his players are hungry for.

Determined to prove themselves, they’ll get that chance after not only moving up from Class 6A to Class 7A for the 2022 season, but jumping straight into arguably the most difficult region in the state if not one of the most difficult in the country.

That, combined with three Shelby County opponents in non-region play, has created an exciting slate of games for the Hornets.

The excitement will kick off on Thursday, Aug. 18, as the Hornets will be one of the first teams to suit up for the new season in a neutral-site game against county rival Helena.

The two teams will travel to the Cramton Bowl in Montgomery for the AHSAA Kick Off Classic on the opening night to the season and will continue a rivalry battle.

They have met every year since Helena High School was created in 2014, and the series has been streaky. Chelsea won the first four games between the two from 2014-2017, but Helena has now won three of the last four games.

The past four, however, have been decided by 13 points or less with three decided by seven or less.

It should be an exciting way to start the season for both, and it’s also an important one that can set the tone.

For the Hornets, they’ll want to gain some early confidence against a 6A opponent to show they are prepared under a new head coach for the challenges of Class 7A. As for Helena, the Huskies will hope to show they are ready for another run at a top-two finish in region play after winning the region title in two of the last three years, including last season.

Following the opener, Chelsea will remain away from home on Friday, Aug. 26 for another county battle against Calera.

Chelsea has won nine of the last 11 games between the two, but Calera took last year’s battle 31-21 in the final game of the regular season. This year, the two will meet the week before region play hoping to gain some confidence.

The Hornets will open their Class 7A, Region 3 schedule a week later on Friday, Sept. 2, and they’ll hope to do so on their new turf, which is currently in the works this summer.

Chelsea will host Tuscaloosa County in that game, which presents a great chance to get off to a strong start.

The Wildcats went 1-9 a season ago, scored 11.5 points per game and gave up 40.8 points per game, while they have failed to win more than three games in a season the last seven years.

The Hornets will then hit the road on Friday, Sept. 9 to take on a familiar foe—the Oak Mountain Eagles.

The 280-area rivals have met each of the last six years, but Oak Mountain has won the last five in a row, while the Eagles also hold a 9-1 lead in the series.

Following that road battle, the Hornets will return home, but they’ll do so to the tune of their toughest game on the schedule—three-time defending state champ Thompson.

Chelsea will host the Warriors Friday, Sept. 16, and it will present a challenge.

The two teams have met 14 times and last played a series between 2012 and 2015. They split those four games, but that was right before Thompson’s rise in the ranks to the dynasty the Warriors are today.

Thompson has lost no more than two games since 2017, while the Warriors finished 13-1 and as state champs for the third year in a row last season.

Chelsea will then get a break from region play on Friday, Sept. 23 when they play host to a third consecutive county opponent and fifth in six games when Pelham comes to town.

Last year, Chelsea was able to grab a thrilling 31-28 victory against the Panthers. The Hornets have now won two of the last three games, while they are 4-7 against Chelsea in the last seven meetings dating back to 2013. The two have met the previous six years in a row, splitting those six matchups.

The Hornets will jump back into region play a week later with a road trip to Vestavia Hills on Friday, Sept. 30.

It marks the first of three games in their final four that will come on the road.

The Rebels finished last year 4-6, but they did gain some confidence late in the season with three consecutive wins to finish off the year.

Chelsea’s final home game of the season will come on Friday, Oct. 7 against another in-county and 280-area opponent when the Hornets host Spain Park.

The two teams have met just two times with Spain Park winning in 2012 and 2013. It marks another battle of new coaches, as Cassity will take on former Jackson-Olin leader Tim Vakakes.

Chelsea will then travel to Hoover and Hewitt-Trussville Oct. 14 and 21, respectively, to end region play with a bang before ending with a bye week on Oct. 28.

The matchup with Hoover will be the first between the two schools, but it will provide some sentimental value with former Hornets’ head coach Wade Waldrop now leading the Bucs.

He’ll take over a Hoover program that is typically one of the best in the country, while Cassity will look to make a splash with a big win late in the season.

A week later will feature another first against Hewitt-Trussville.

The Huskies have also turned into one of the state’s best teams with at least eight wins in all but one of the last six seasons.