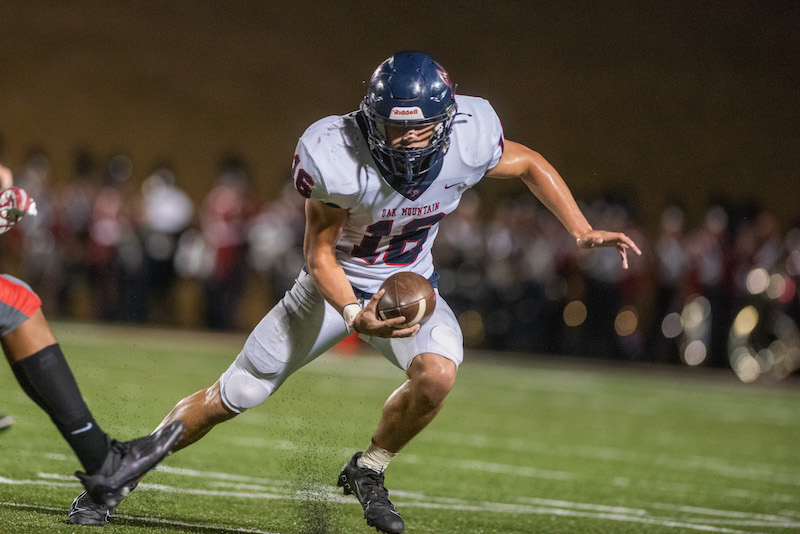 Oak Mountain’s 2022 football schedule will be challenging, but it will also feature opportunities early in the season to gain confidence. (File)

The Oak Mountain Eagles have not only earned playoff trips the last two years, they’ve advanced to the second round in the 7A classification, putting together two of the best seasons in school history against one of the state’s most difficult schedules.

Heading into year two under head coach Tyler Crane, they’ll hope that trend continues against another difficult slate of games.

Important to any season is a fast start to build confidence, and the Eagles have done just that each of the last two years en route to their successful stints.

Now, in 2022, the schedule offers similar opportunity with only one 7A playoff team from last year on the schedule in the first six games of the season.

That said, it’s still not an easy trek.

The Eagles will take on five teams that did make the postseason last year, four of them were just competing at the 6A level.

Then, from there, it gets challenging with the region champ and state champ in back to back weeks late in the season.

The opener will mark the third meeting between the two schools, as Northridge won both matchups in 2010 and 2011 by scores of 23-0 and 22-7, respectively.

Then will come the traditional rivalry with the Panthers, and the Eagles have recent confidence in that rivalry series.

After losing nine of the first 11 games between the two, Oak Mountain has now won the last three in a row by a combined score of 70-28.

The Eagles will then hit the road for the first time when they travel to Hewitt-Trussville on Friday, Sept. 2 for the region opener.

Oak Mountain was without starting quarterback Evan Smith last year during a 28-7 loss. And while Smith has graduated, the Eagles have battled in close games with the Huskies in recent years as they’ll look to start region play with a bang.

That will be followed by a rivalry game with Chelsea, and for the first time, the matchup will take place as a region battle in Class 7A, Region 3.

The two have met every year since 2016 with Oak Mountain winning all but the 2016 matchup. The Eagles hold an all-time record of 9-1 against the Hornets going into this year’s matchup.

Oak Mountain will then have another winnable game on the road against Tuscaloosa County on Friday, Sept. 16.

The Eagles have won three straight in the series, scoring 42 or more in those three wins, while they hold a 6-2 edge all-time.

They’ll then get a break from region play Sept. 23 with a home game against 280-area rival Briarwood.

The 6A Lions are one of the top teams in the state, but Oak Mountain will hold the classification advantage.

After that challenging battle, Oak Mountain will jump back into region play with the most difficult stretch on the schedule.

Oak Mountain remains winless against Hoover at 0-20 all-time, but the Eagles have lost two games by 10 combined points to the Bucs the last two years. Now, Hoover is breaking in new head coach Wade Waldrop going into the 21st meeting between these two.

The Eagles have also struggled lately with Thompson, as the Warriors have become one of the nation’s top teams. Oak Mountain won seven straight from 2010-2016, but the Eagles have lost the last six in a row.

Thompson will once again enter the season as favorites to claim the Class 7A State Championship after winning the previous three titles.

After that challenging stretch, Oak Mountain will finish the regular season with one home game and one more road contest.

The Eagles will host Vestavia Hills on Friday, Oct. 14 in a region battle, before then turning to the region and regular-season finale against rival Spain Park on the road on Friday, Oct. 21.

They have beaten the Vestavia 24-14 and 35-28 the previous two years, which snapped a three-game losing streak to the Rebels.  Vestavia, however, still leads the series 13-5.

The Eagles are 6-14 all-time against the rival school located less than 2 miles away, but they have won three of the last five and hope this year’s game will boost them into the postseason with a bye week scheduled for Oct. 28.