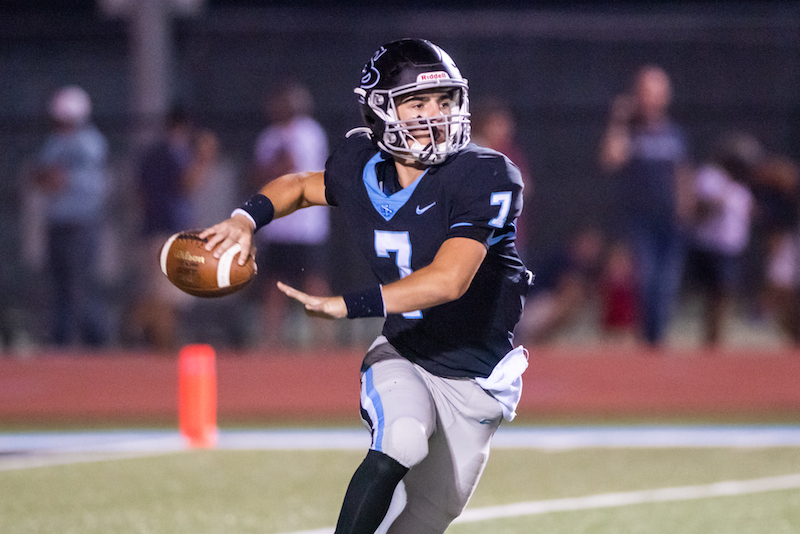 Spain Park’s football schedule will feature plenty of challenges this season, but head coach Tim Vakakes has the team rejuvenated and ready for the trek ahead. (File)

With four wins or less the last four years and just one winning season of 6-5 since 2016, the Spain Park Jaguars are hoping from a jolt of energy from new head coach Tim Vakakes.

Looking to take the program back to the state championship game, a spot they’ve been twice in school history, Vakakes now comes over from Jackson-Olin after rebuilding that program.

Now, however, he gets the schedule associated with Class 7A, Region 3.

But the challenge of arguably the most difficult region in the state is an opportunity for the new coach and his players.

With a rejuvenation around the program, the Jags will take on three county foes outside of region play, while they’ll also take on the difficulties of eight region games.

The season will begin with a battle against a former Spain Park assistant when the Jaguars welcome Class 6A Calera to town on Friday, Aug. 19.

The Eagles are led by Jason Hamlin, who led the them to their first winning season at the 6A level last year en route to a 7-4 record.

Spain Park will have the classification advantage, but Calera returns enough talent that it won’t be a cake walk by any means.

The Jags will then start a three-game road trip the next three weeks, and it’s a stretch that will feature some of their most difficult games of the season.

On Friday, Aug. 26, they’ll make the short trip down the road to Briarwood Christian School for a battle with the 6A Lions. BCS has finished in the top two of its region every year since 2014 and beat the Jaguars 42-8 a season ago.

That will be followed by matchups with last year’s region champion and state champion in back-to-back road games.

Spain Park will start that challenging two-week stretch with a trip to Hoover on Friday, Sept. 2, who won last year’s region title.

The crosstown rivals have met every year since 2002, but the Jags have only won two of those head-to-head. The Bucs have won the last six in a row to reclaim their hold on the series after Spain Park won both games during the 2015 season.

Then comes a battle against defending state champion Thompson on Friday, Sept. 9.

Spain Park became the first team to score on Thompson last year with a field goal, but the Jaguars ultimately lost that game 49-3. That marked the fifth consecutive loss for the Jags in the series after they won nine of the first 11 games between the two.

The Jags have lost four straight to the Rebels after previously winning four straight. They have also scored seven or less in the last three meetings, including losses of 45-7, 32-7 and 37-6.

That will be followed by a much-needed bye week on Sept. 23, before the Jaguars jump back into action on Friday, Sept. 30 with a home region matchup with Tuscaloosa County.

Spain Park has had the Wildcats’ number the last eight years, losing just twice in that span. The Jags have won the last two in a row, including 35-7 a season ago.

Following that, Spain Park will hit the road on Friday, Oct. 7 for a matchup with new 7A opponent Chelsea. The Hornets are making the leap up from Class 6A with a new head coach themselves. It will mark the first-ever meeting between the two 280-area schools.

The Jaguars will then return home for their final two region games with matchups against Hewitt-Trussville and Oak Mountain on Oct. 14 and 21, respectively.

Spain Park is 2-5 all-time against Hewitt-Trussville and 1-4 against the Huskies over the last four meetings dating back to 2017.

Oak Mountain will present another 280-area rival for the Jags. The two teams have met every year since 2002 with Spain Park leading the series 14-6.

The Jags won eight consecutive games in the series from 2006-2013, but have lost three of the last five with the one win in that span coming in double overtime.

The Jaguars will close out the regular season with one last matchup against a county opponent when they travel to Pelham on Thursday, Oct. 27.