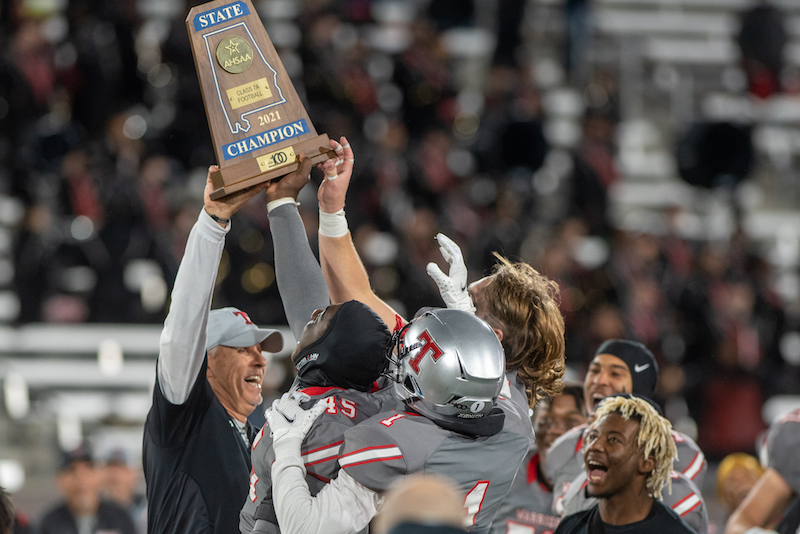 Thompson will open the season with a difficult two-game stretch, including a nationally-televised game against Lipscomb Academy on ESPNU. (File)

ALABASTER – Once again, the Thompson Warriors will be on the national stage early in the 2022 football season.

Fresh off their third of three consecutive state championships, the Warriors won’t just open against Georgia State Champion Buford week one in the Freedom Bowl, but their home opener against defending Tennessee State Champion Lipscomb Academy will be nationally televised on ESPNU.

It marks the third time in the last few years that Thompson will have a game airing on the ESPN family of networks.

The series typically features the top teams in the country, and Thompson fits that mold once again heading into the 2022 season.

As the winner of the last three Class 7A State Championships, the Warriors are considered the favorite to win the title again this season with several of the country’s best players back on this year’s team, including ESPN 300 players Tony Mitchell (Alabama commit) and Peter Woods (Clemson commit).

What makes the matchup one worthy of television is not only the talent possessed by Thompson, but also by Lipscomb, who is coming off the Class 2A State Championship in Tennessee.

Lipscomb finished 13-1 last year and have two ESPN 300 ranked players on defense, while the offense has two Division I players headed to the SEC as well.

Thompson has become one of the country’s biggest high school football powerhouses in recent years, spending the majority of last season ranked inside the top 10.

The Warriors have won 11 or more games each of the past five seasons, while they have lost two or less each year in that span for a combined record of 62-5 dating back to the 2017 season.

Even more impressive, Thompson has gone a combined 39-2 the last three years en route to three-peating as state champions.

Now, they’ll truly see how they compare to others who are ranked highly in the country.

The Warriors do compete in a difficult region with Hoover and Hewitt-Trussville ranked nationally the last few years, but this season marks an opportunity against powers from other states to open the season.

When they take on Buford in Milton, Georgia, it will be a battle of teams who have both won three consecutive titles.

Buford has won the last two 6A state titles, while the Wolves also won the 5A title in 2019. They have won 14 state championships all-time, including 10 since 2007 as a dynasty in Georgia.

Like Thompson, Buford has lost no more than one game each of the last three seasons, going a combined 41-3 in that span.

It won’t get any less thrilling for Thompson in the televised week-two battle with Lipscomb.

The Warriors will have more of a classification advantage against, but the Mustangs, who are based just outside of Nashville, are one of the top private schools in Tennessee.

The Mustangs are coming off back-to-back championship game appearances with a win in last year’s title game 27-0 against Christ Presbyterian a year after losing the same game by seven points.

As if those two and the region trek weren’t enough, don’t forget, Thompson will also host defending Class 6A State Champion Clay-Chalkville in a non-region game on Sept. 23.